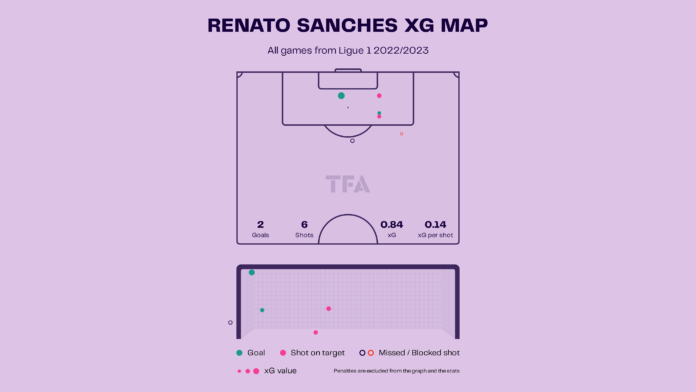 Renato Sanches wasted little time endearing himself to the Paris Saint-Germain faithful, scoring one minute into his debut, but what else is there to know about the Portuguese superstar? Sanches accompanied head coach Christophe Galtier from LOSC to PSG this summer. The coach is using him in rotation in the midfield and depends on him for his attack-mindedness and ability to penetrate. Sanches is a Ligue 1 champion with Lille and a European champion with his nation, Portugal. Renato is starting to settle into this star-studded team, and most of his contributions are coming off the bench. The last match for Renato Sanches was against Auxerre in the French Ligue 1, when the match result was a 5-0 Paris Saint-Germain home win. We now look at some of the stats that show how the Portuguese has settled into this star-studded team. 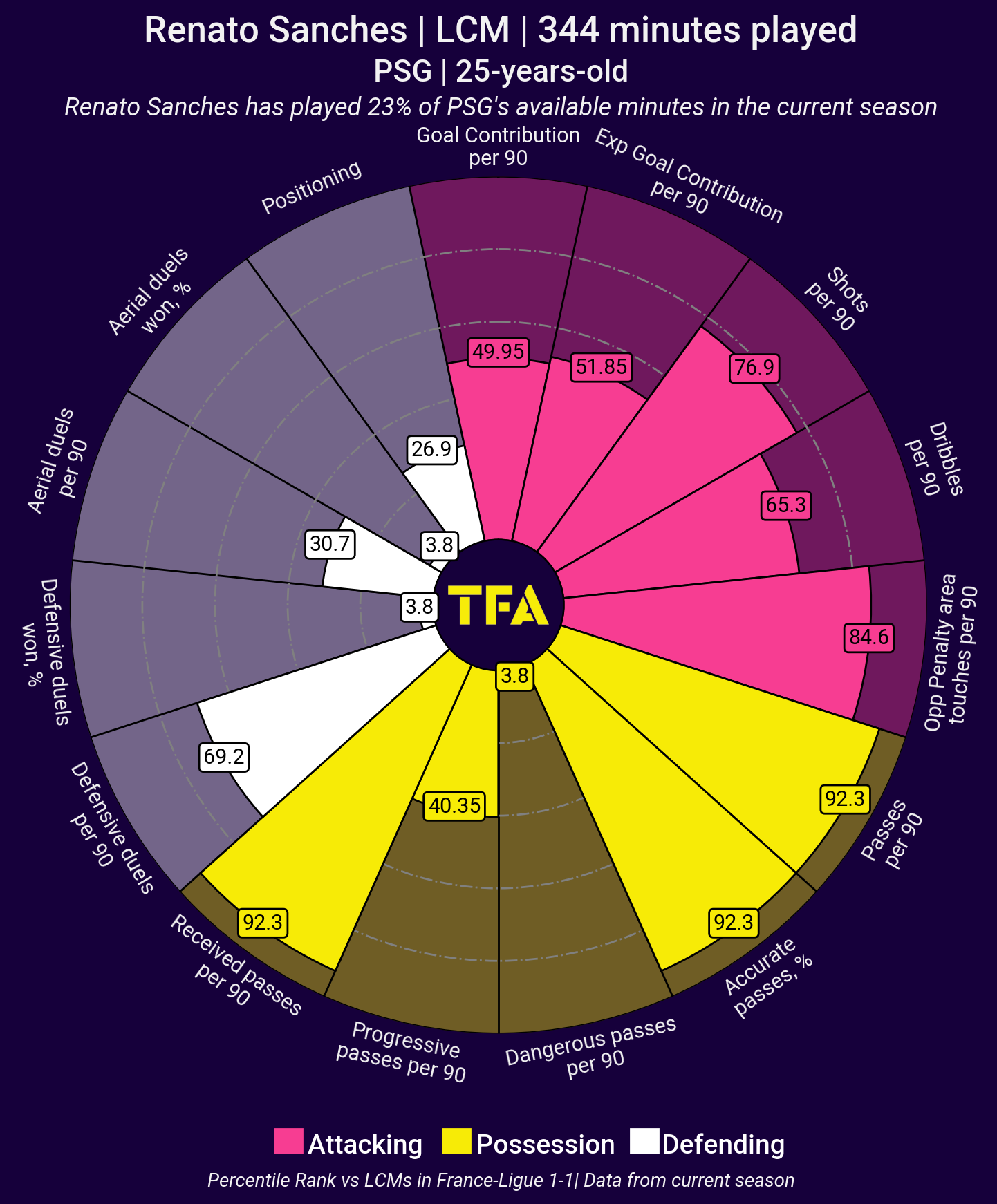 The above viz shows the percentile rank for Renato Sanches vs. LCMs in Ligue 1 this season. In attack, Renato has a knack for entering the opposition’s box. Renato has an 86.4 percentile rank in terms of touches in the opponent’s penalty area per 90. Renato Sanches is skilled with the ball and can perform dribbles from the centre of the pitch. Another highlight is the shots per 90 taken by him, which are close to the upper limit. In terms of possession, Renato displays the ability to provide accurate passes and averages more than 92 passes. The positioning of Renato also helps the PSG midfield and back line find him in space and pass the ball to him often.

Renato Sanches Off the bench 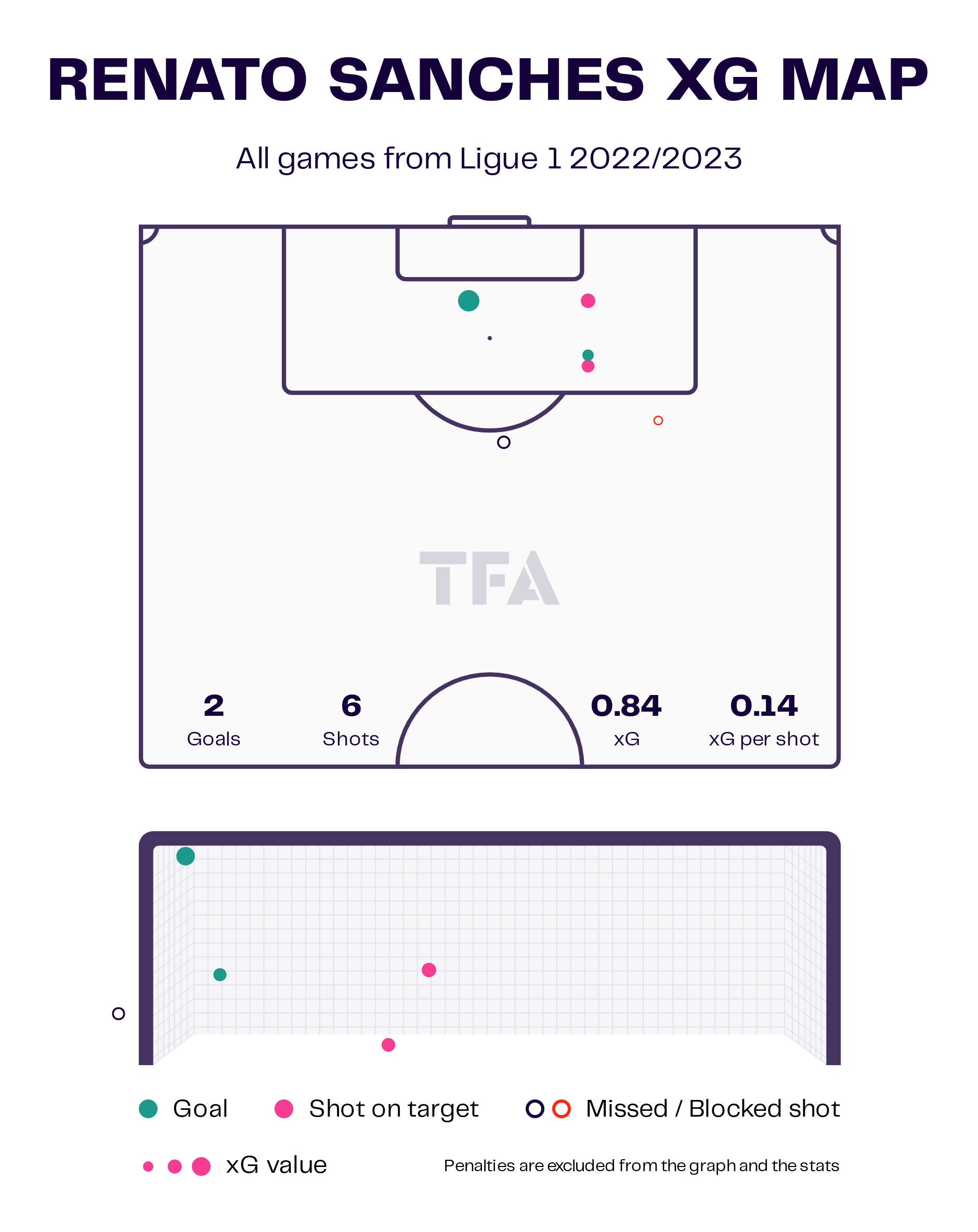 Renato Sanches appeared in 10 games for Ligue 1 in 2022-2023. In his ten appearances, he has a total of two goals from six shots, resulting in 0.84 xG and 0.14 xG per shot. The two goals scored by Renato Sanches have come from inside the box. This indicates his aggressive intent to go forward and score goals. 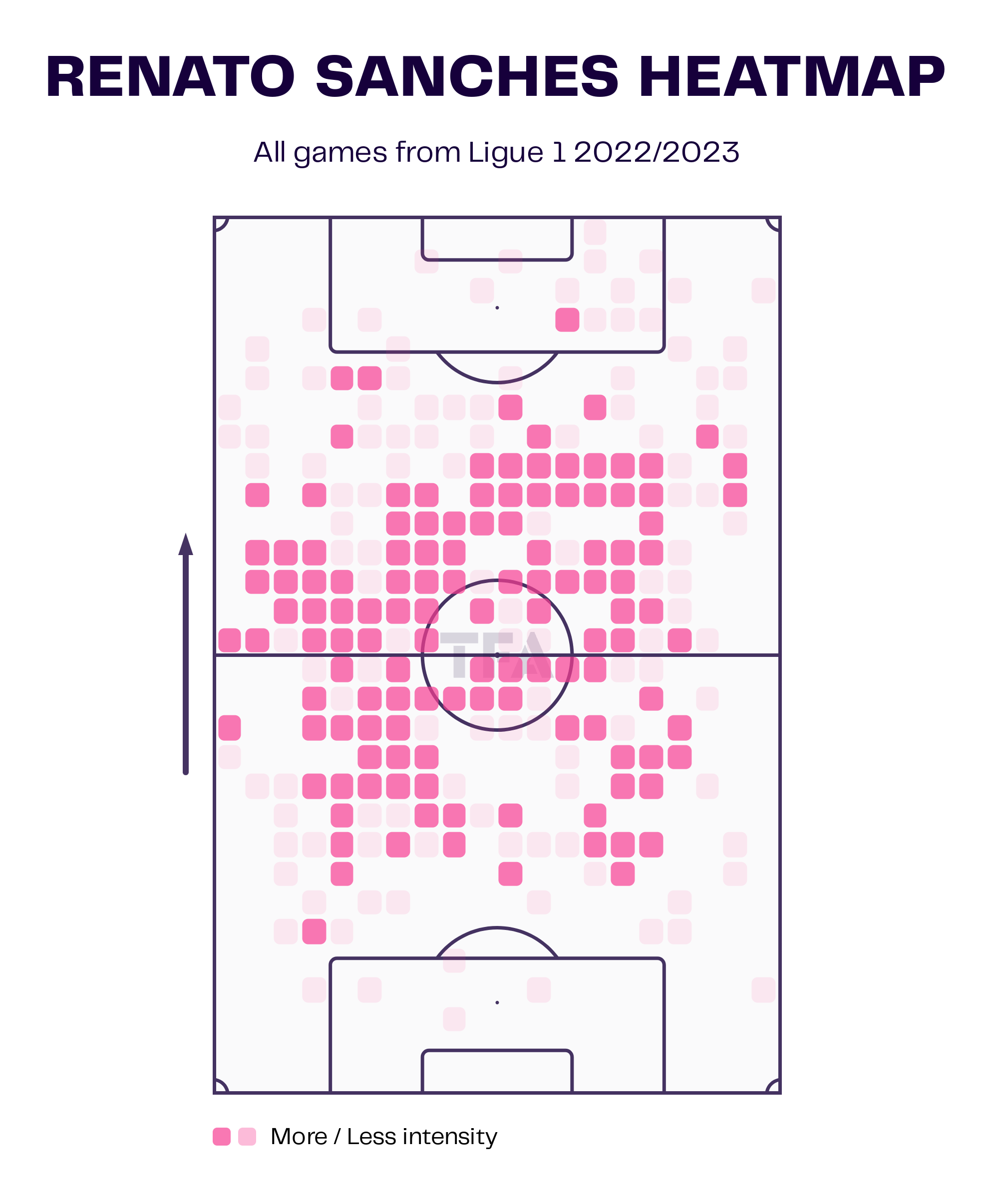 Renato is a box-to-box raider and makes his presence felt all over the pitch. He constantly provides attacking support and prefers to move around in the opponent’s half. He takes advantage of half-spaces in the opposing half. This ability helps him receive the ball in dangerous areas, progress forward, and carry the ball. 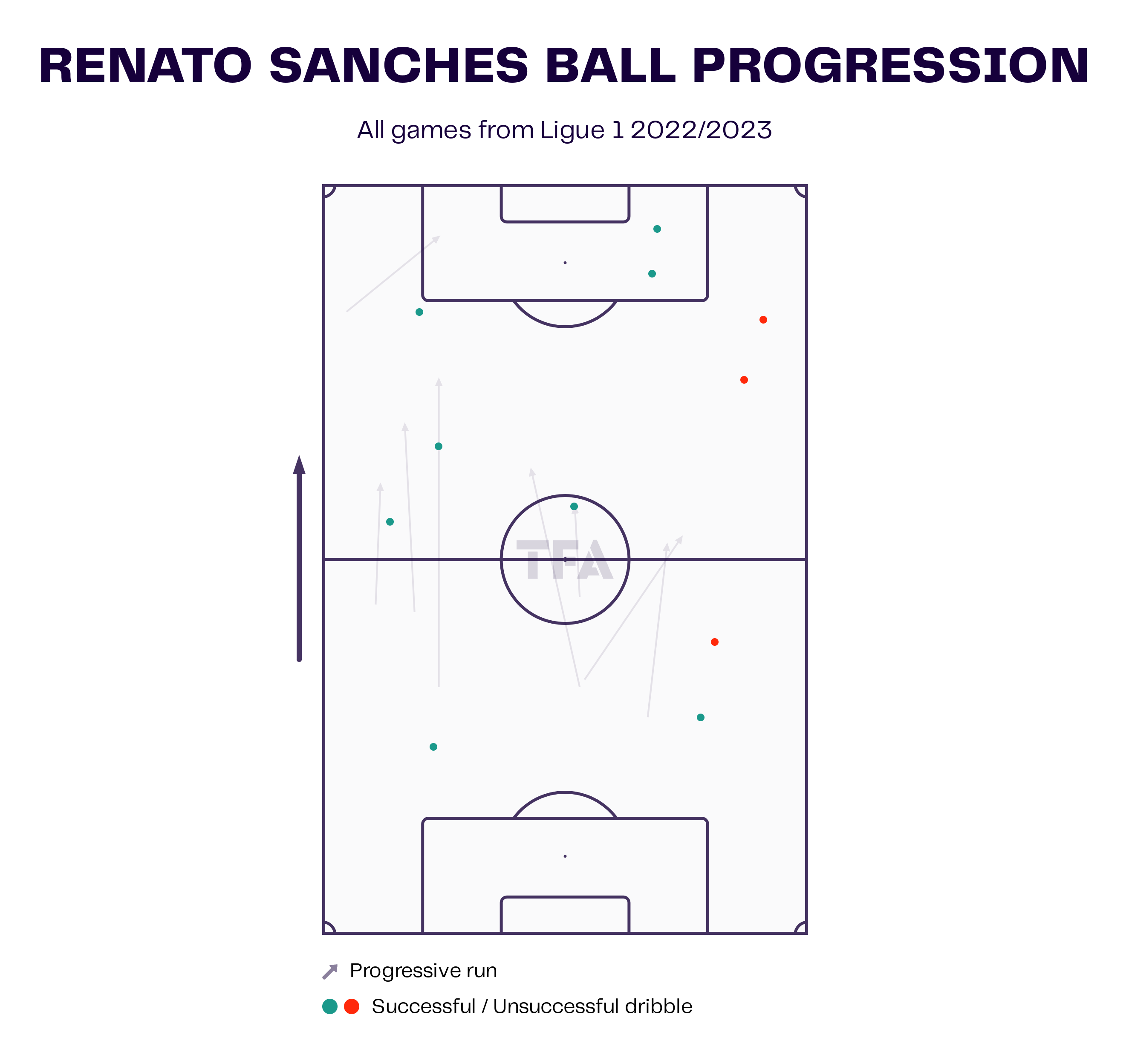 The above viz represents the overall ball progression made by Renato Sanches for Paris Saint Germain in the Ligue 1 2022-2023 season. It depicts the positioning to receive the ball and carry it up the pitch used by Renato. He is a player who plays less in PSG’s defensive third. Renato has more ball progression in the final third of the pitch. His ability to dribble is also a crucial part of his playing style. With the eight successful dribbles shown above, six of them have taken place in the opponent’s half. Out of these three successful dribbles, two have been completed by Renato in and around the opponent’s box. This ability to dribble in dangerous areas gives a boost to PSG’s midfield.

What can Renato Sanches offer from the start? 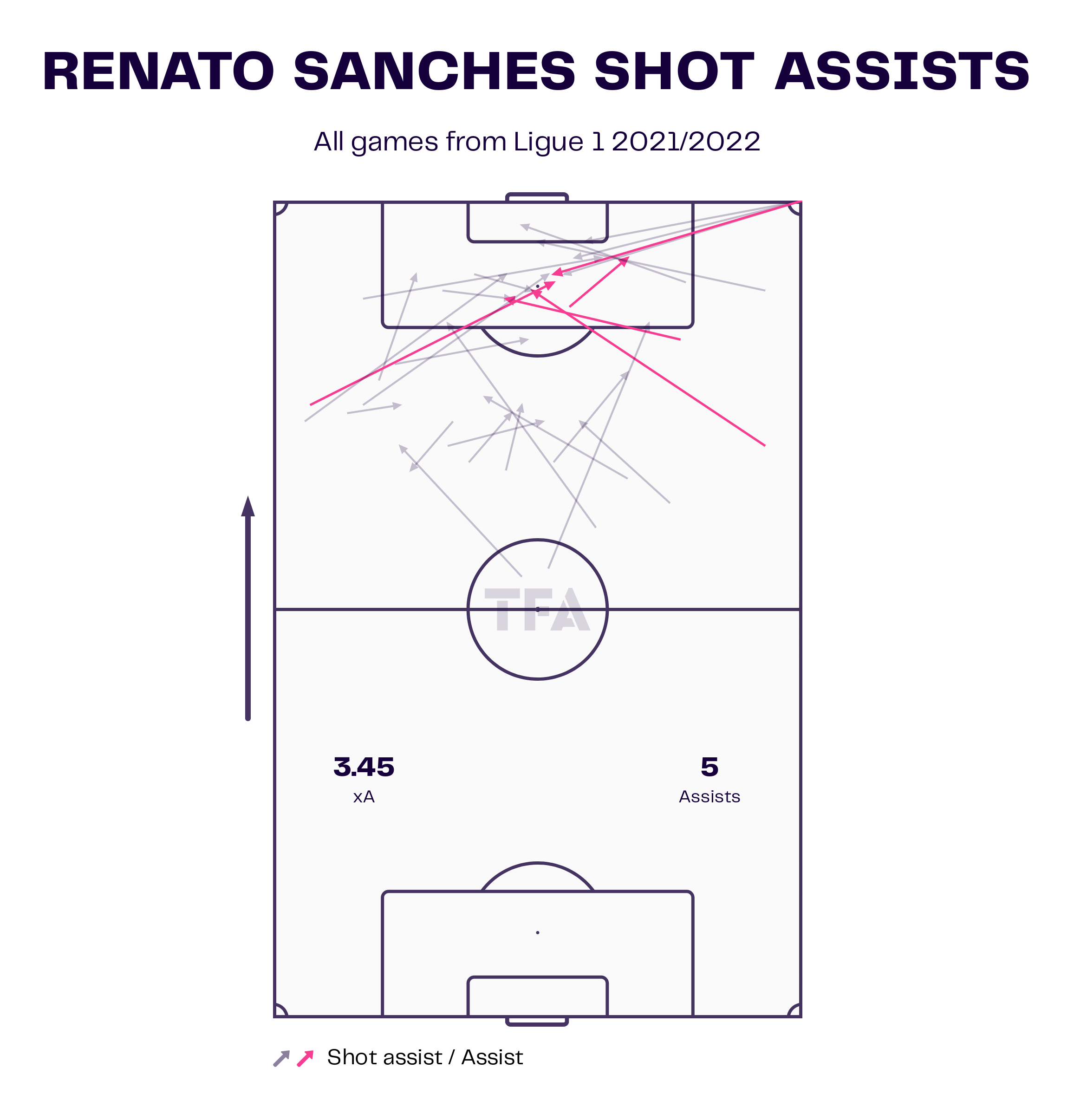 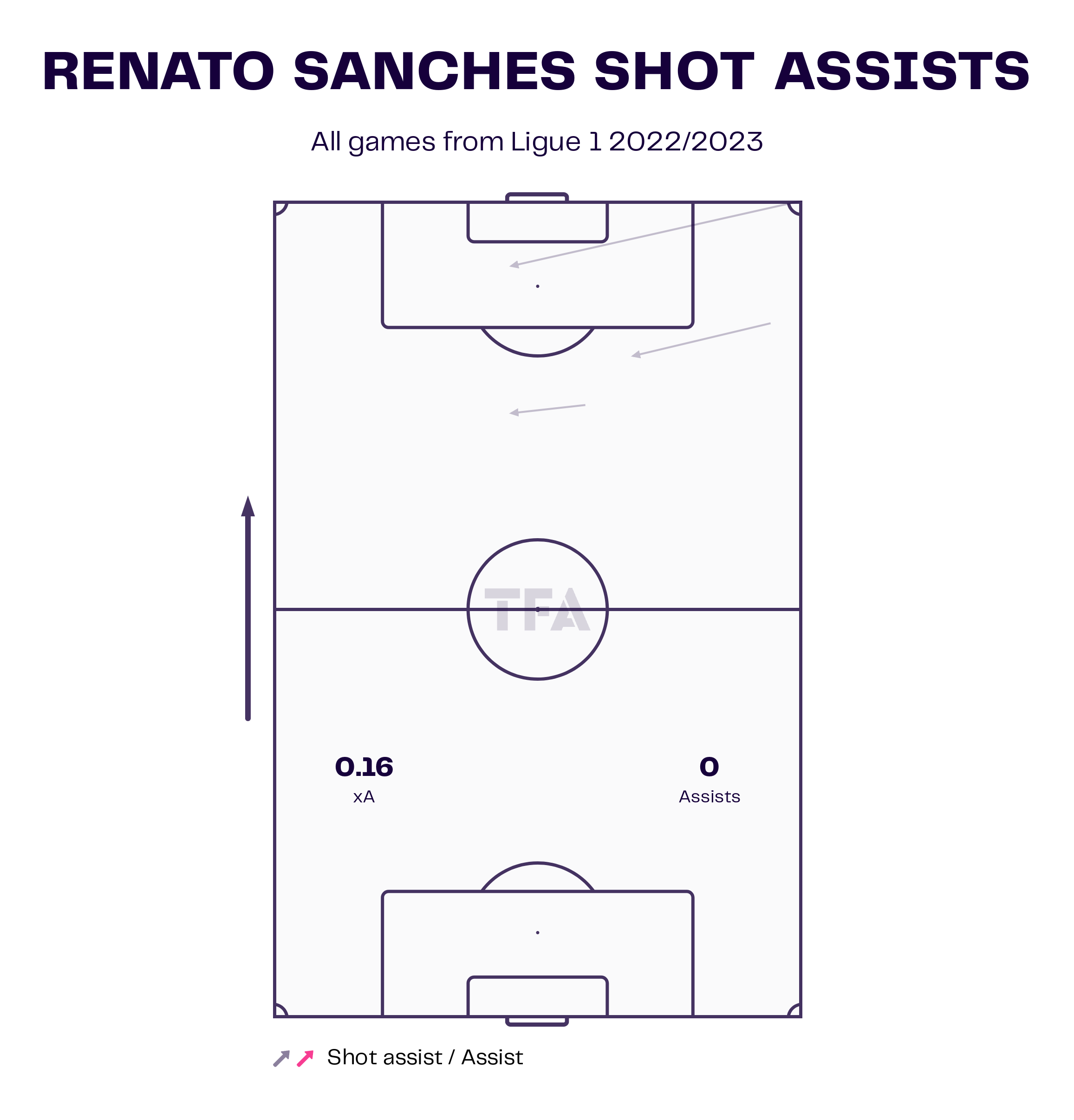 The above comparison of shot assists between the two seasons shows what he can offer if given a regular start. The involvement from the corners is also visible for the 2021–2022 season. The ability to find passes inside the box is also visible. For the 2022-2023 season, most of the involvement is happening from the right side of the pitch. The most impressive part is the versatility of the positional play for the 2021–2022 season. Renato Sanches adds versatility to PSG’s midfield and can offer an additional attacking option for Galtier.

Under the Microscope: Why PSG can count on Carlos Soler

Under the microscope: How a move to Ligue 1 has revived...

The emerging threat to PSG’S crown