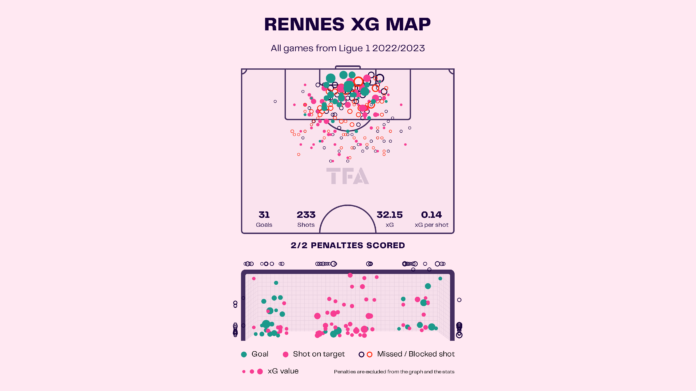 Rennes finished last season in fourth position in Ligue 1 with a total of 66 points, winning 20, losing 12, and drawing six. The team made it to the Europa League and is currently set to face Shakhtar Donetsk for their round of 16 matches. This season in Ligue 1, Rennes’s form is very good overall with ten wins, four draws, and three losses. Rennes is currently fourth out of 20 teams in the Ligue 1 table, having won 59% of their matches. In terms of Rennes’s home form, it is very good, with eight wins and one loss. Their away form is decent, with two wins, four draws, and two losses. Additionally, Rennes have scored a total of 34 goals this season in Ligue 1. Below are attacking stats for the team from their current season. 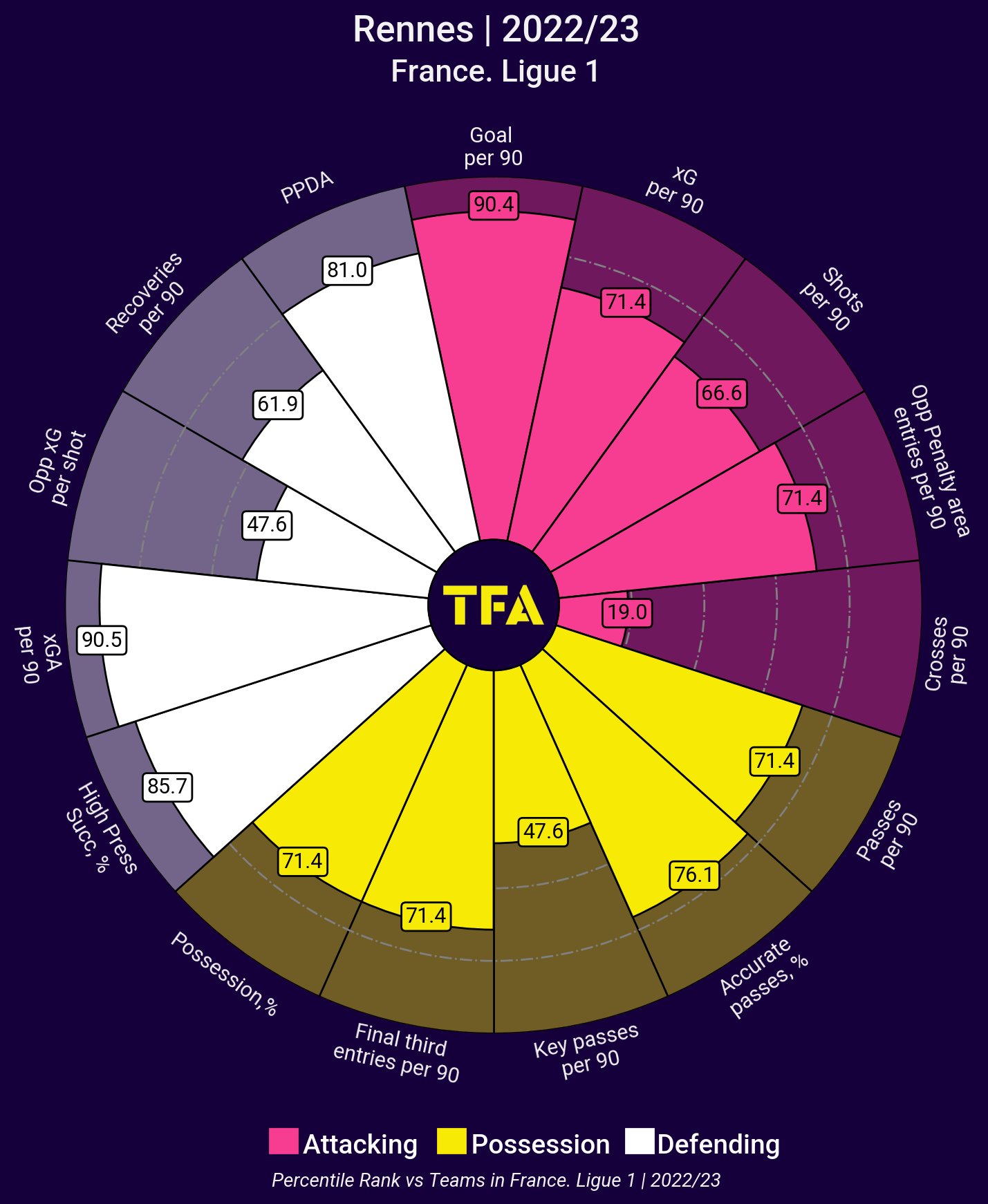 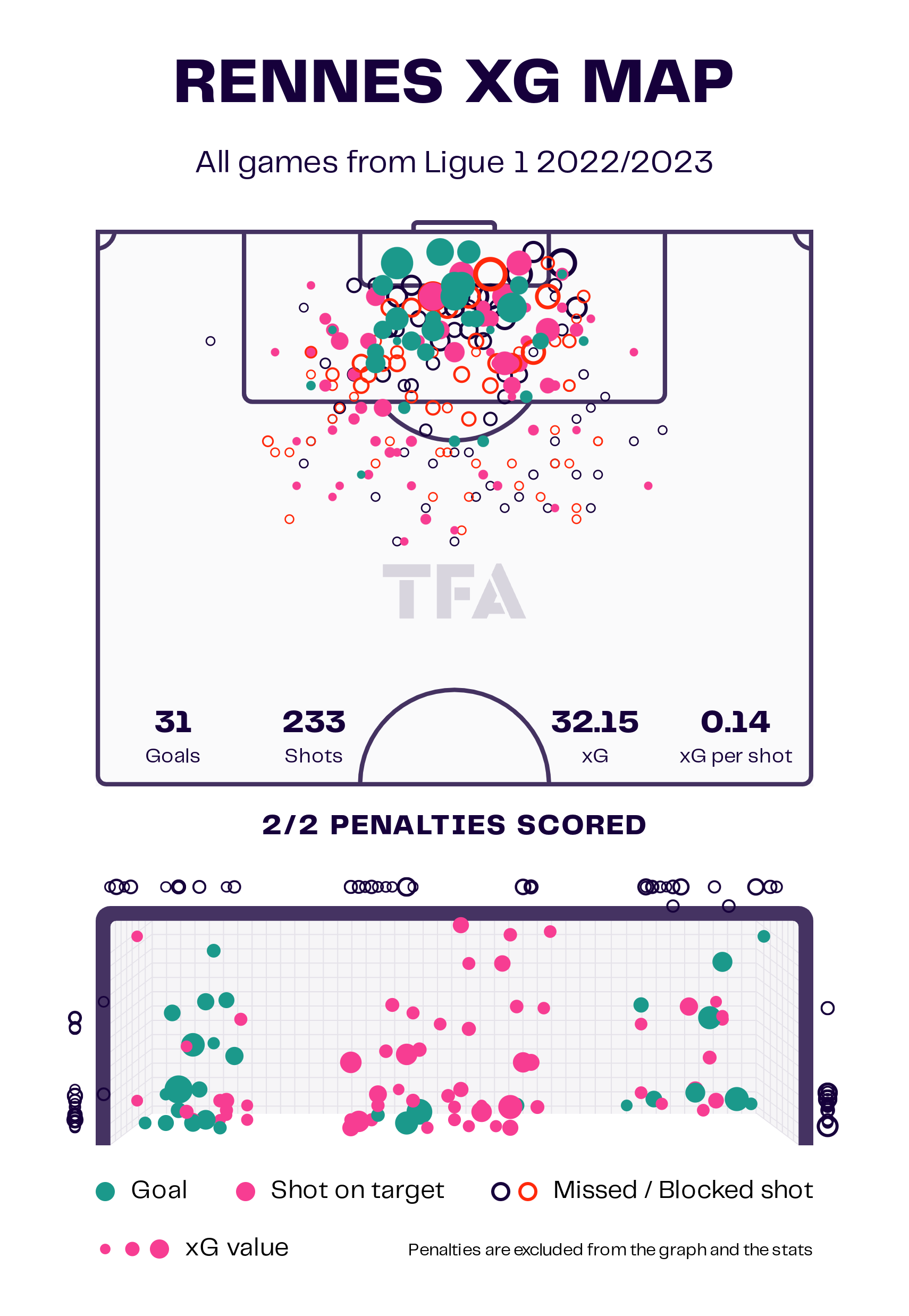 The French side has scored 34 goals with an average of just over two goals per match. The above viz shows the shot map of the team in the current season. It can be observed that Rennes have scored most of their goals from just around the 6-yard box. Rennes averages 14 shots per match with 50% accuracy. They have an xG of 32.15, owing to the fact that the majority of their shots have come from dangerous areas inside the penalty box. Additionally, Rennes have an xG per shot of 0.14 in the league. They have an xG per 90 of 1.98 for the current season. 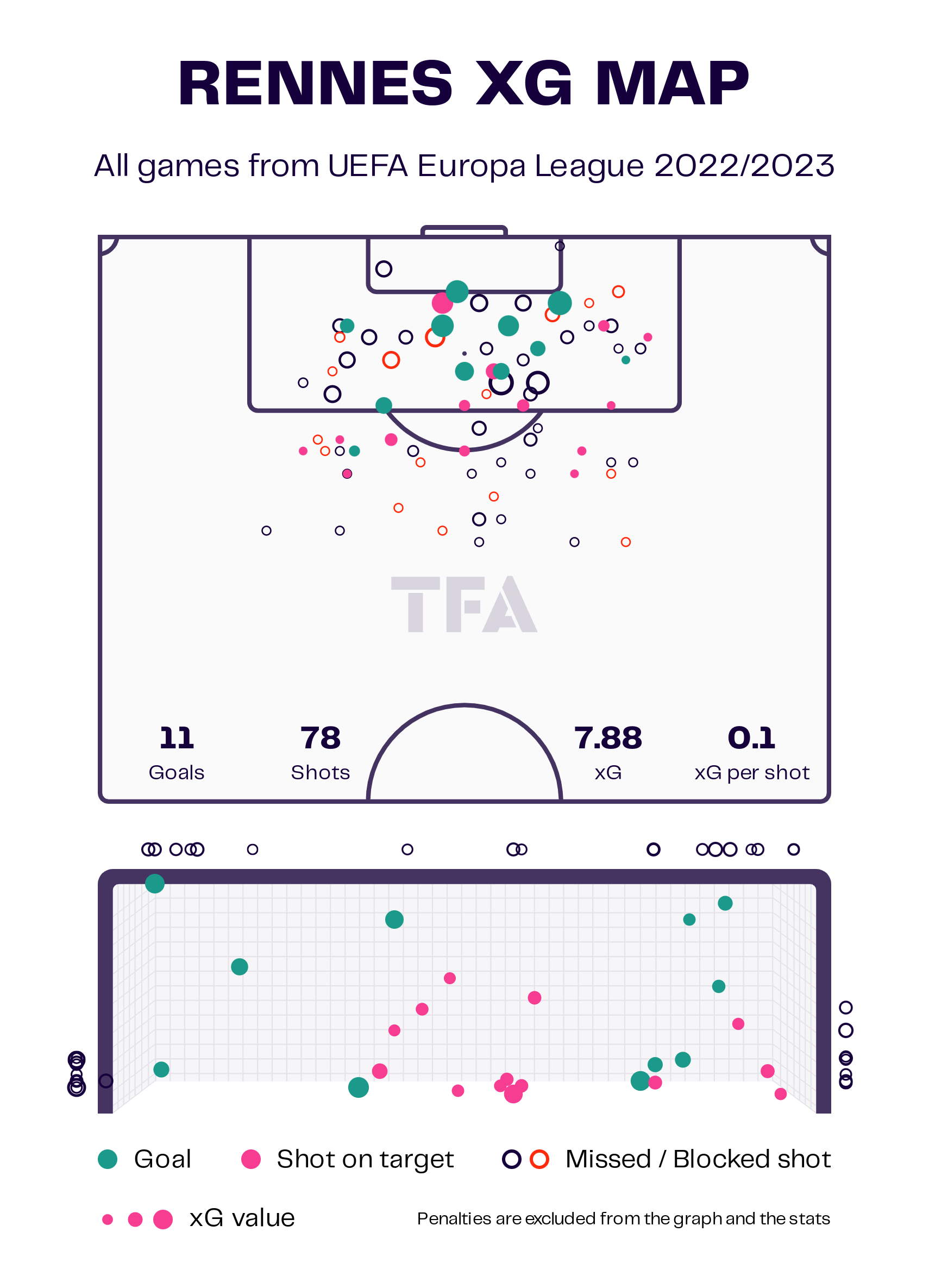 Rennes have played six matches in the Europa League this season, winning three and drawing three. They have scored 11 goals and conceded eight in the matches played, for an average of 1.84 and 1.34, respectively. The team has an overall xG of 7.88 in the Europa League 2022/23 after having attempted a total of 78 shots. Most of their goals have come from inside the box. 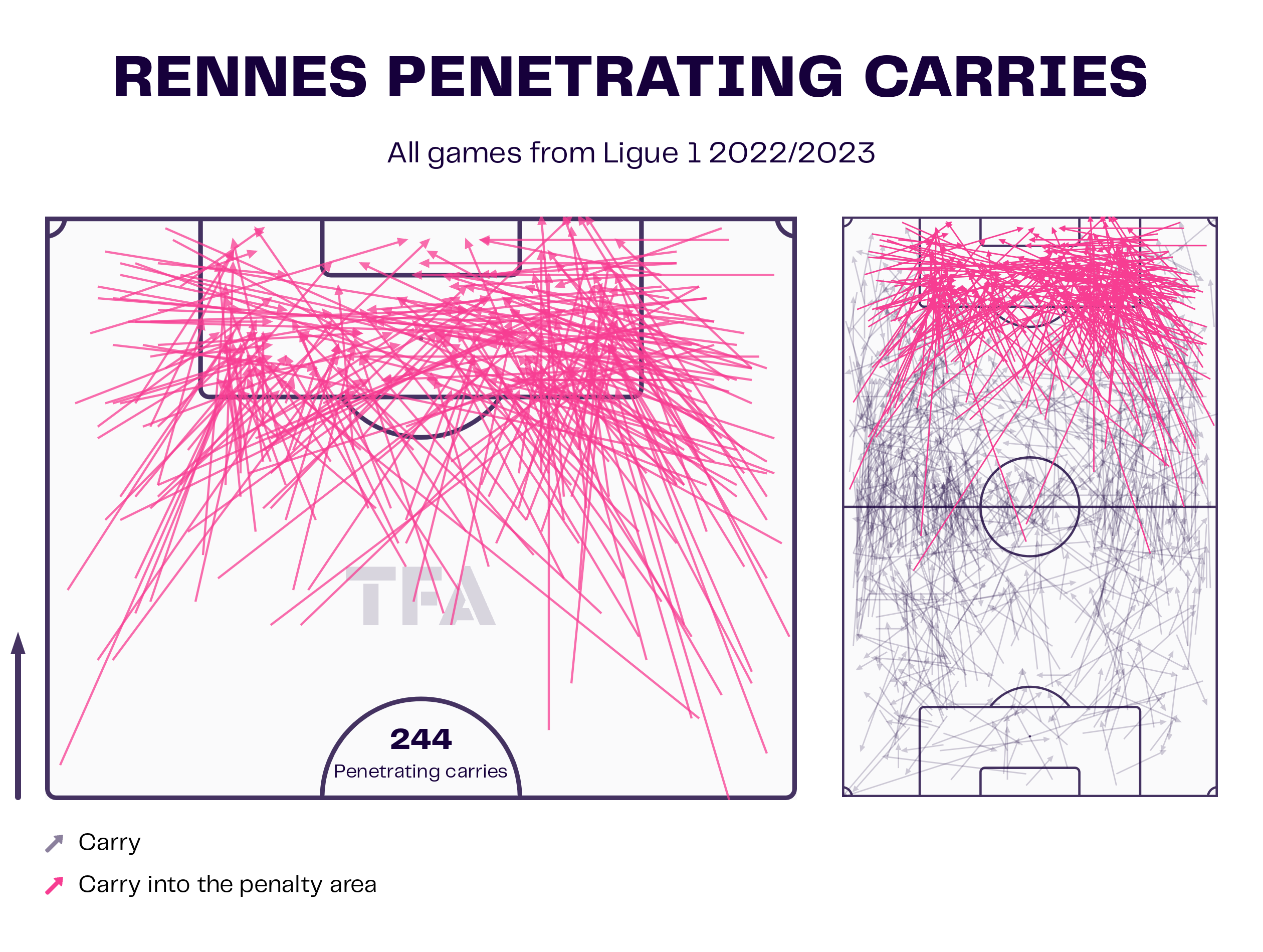 Rennes have made a total of 244 penetrating carries so far this season. They use the flanks extremely well in order to make moving into the box. The team averages 57.82 passes into the final third with 79% accuracy. Additionally, they make 77.24 progressive passes per 90 minutes. Rennes make 20 entries into the opposition’s penalty area per 90 minutes, which is the third-highest total in the league after the likes of PSG and Lille. 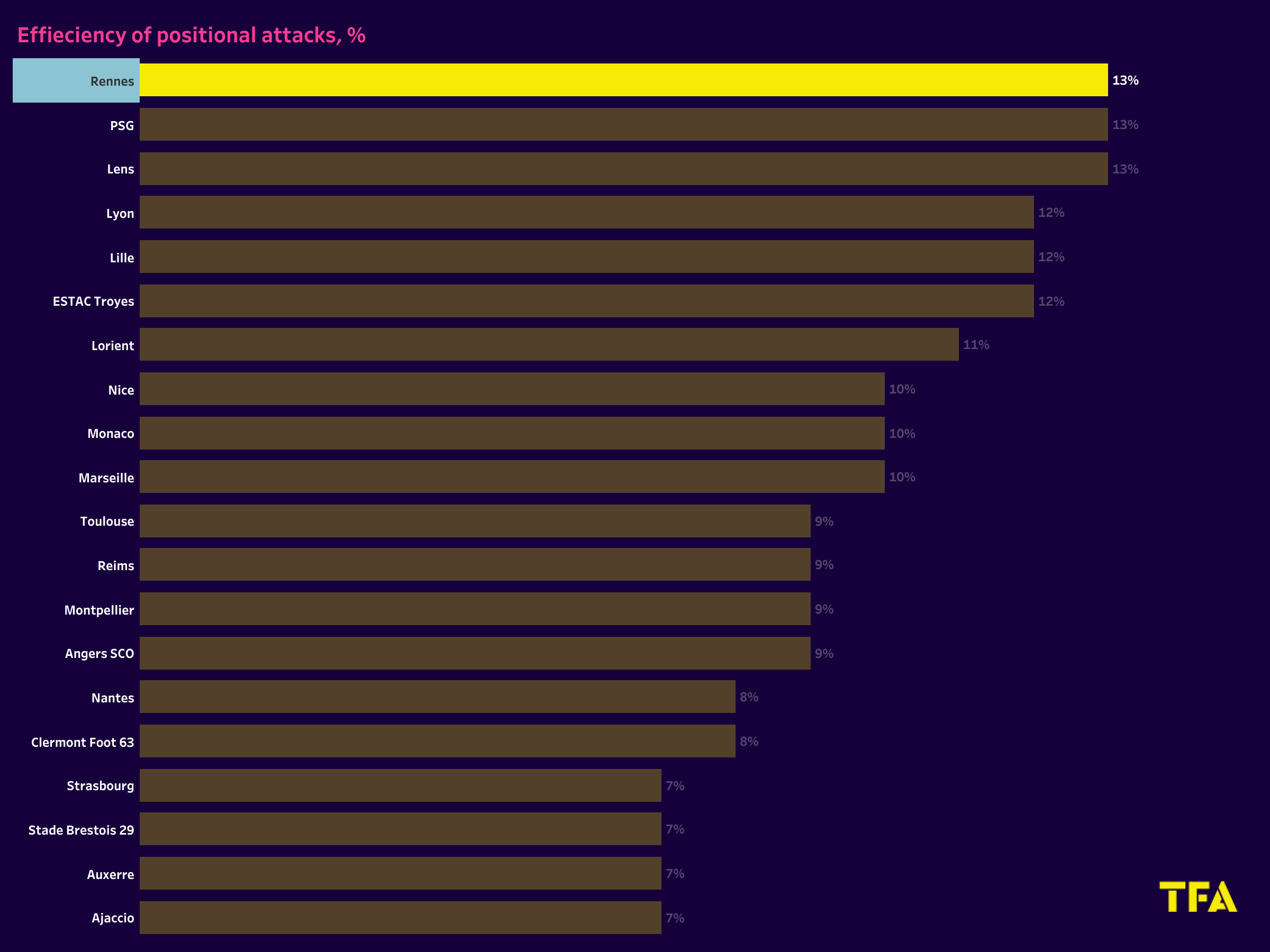 Overall, Rennes seem to be in all-out attack mode this season due to their sheer consistency so far in Ligue 1 2022–23. The club has also had an impressive European campaign so far and will look to move on to the next round. They have scored a good number of goals in both their domestic and European campaigns and are looking convincing so far. They face Clermont in their next Ligue 1 match and will be looking to push for the UCL spot, hopefully with the help of some impressive attacking displays in the upcoming matches.