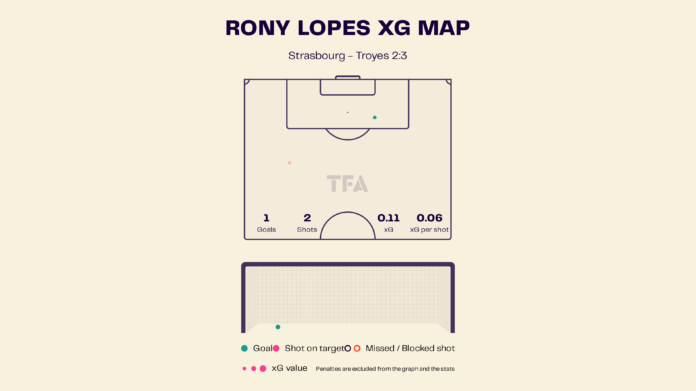 Marcos Paulo Mesquita Rony Lopes is a Portuguese professional footballer who plays as an attacking midfielder or winger for Ligue 1 club Troyes on loan from Sevilla. He stood out in Round 17, and his performance in the match against Strasbourg was a major factor in Troyes’ getting an important victory. They won three goals to two, and Rony ended the match with one goal and one assist. It is confirmed that Lopes is an indispensable element in Patrick Kisnorbo’s squad. Below are some of the stats for Rony Lopes in attack for Troyes this season. 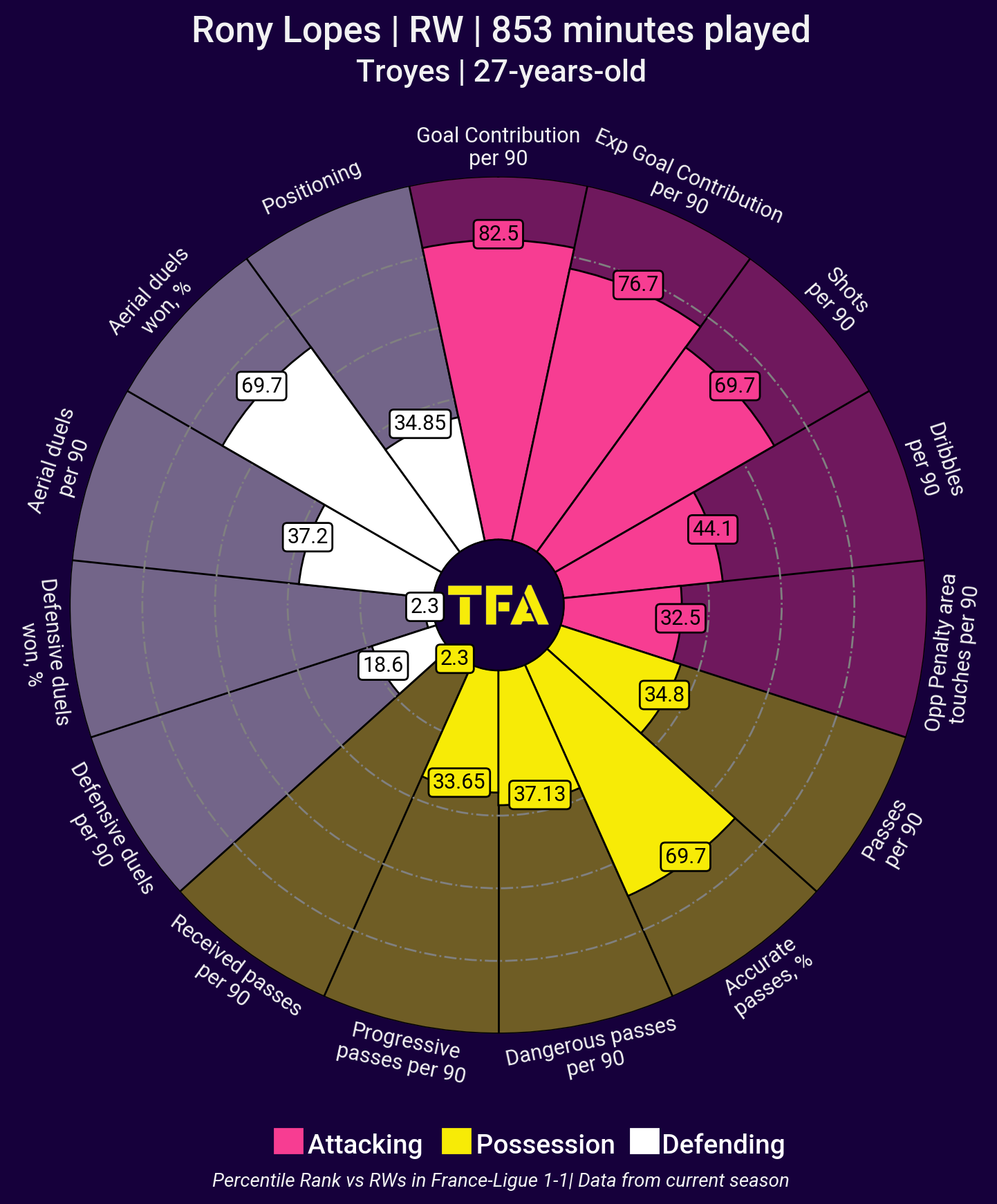 The above viz shows the percentile rank of the player in comparison to other players in Ligue 1. As the man in form, Lopes is a big threat in front of goal and ranks among the top 82.5 percentile for goal contributions in the league. Overall, he ranks highly in expected goal contribution during attacking and has been a useful player for the team. He has an xG of 0.12 per shot in the current season so far. 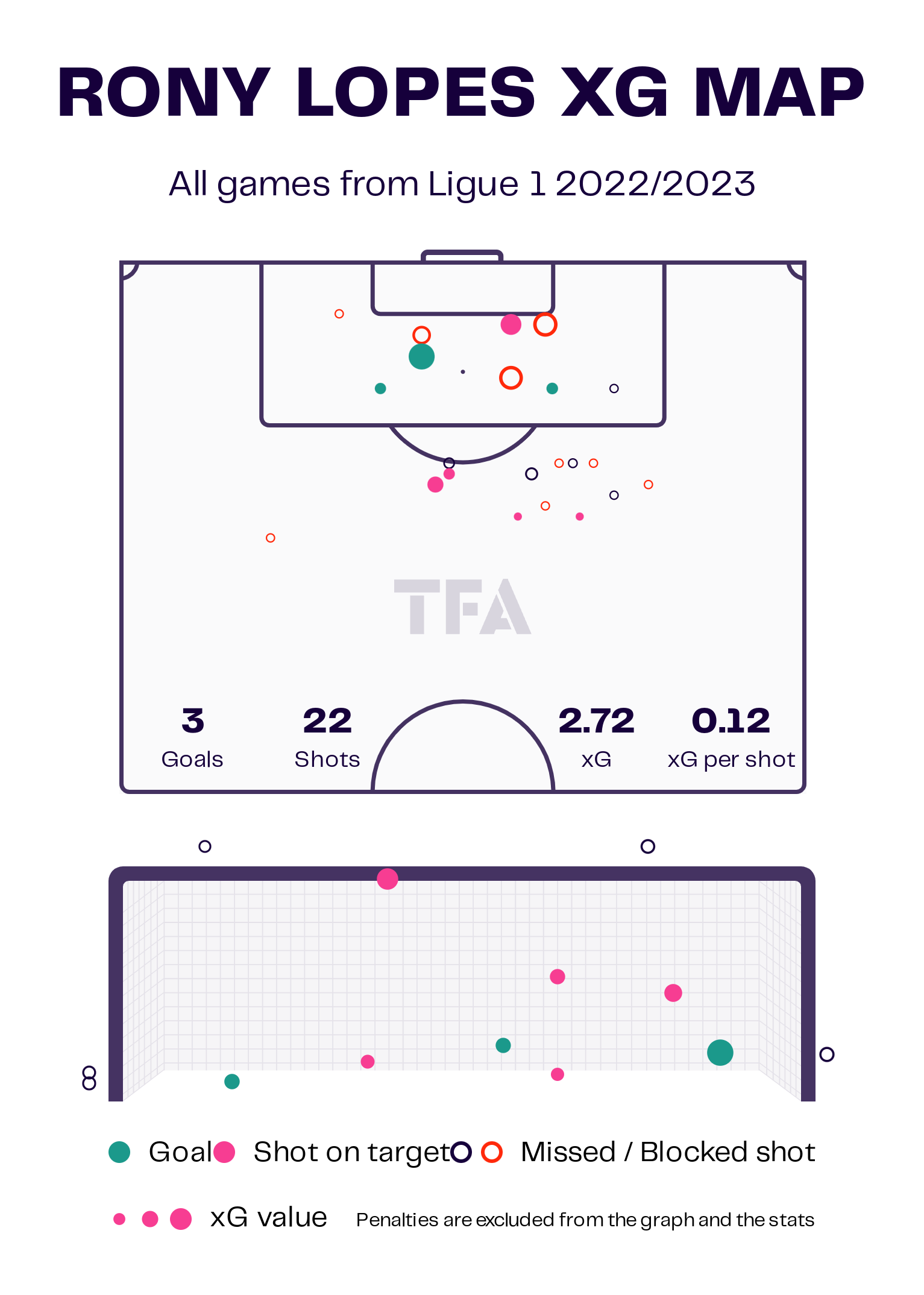 In the 2022–23 French Ligue 1 season, Rony Lopes has played 11 matches (plus two as a sub). Lopes has 11 shots on target from a total of 17 shots and has scored three goals (2.72 xG). Rony Lopes averages 20 passes per match with a pass completion rate of 80% and has four assists. All of his goals have come from inside the box, with a few shots on target from outside the box. 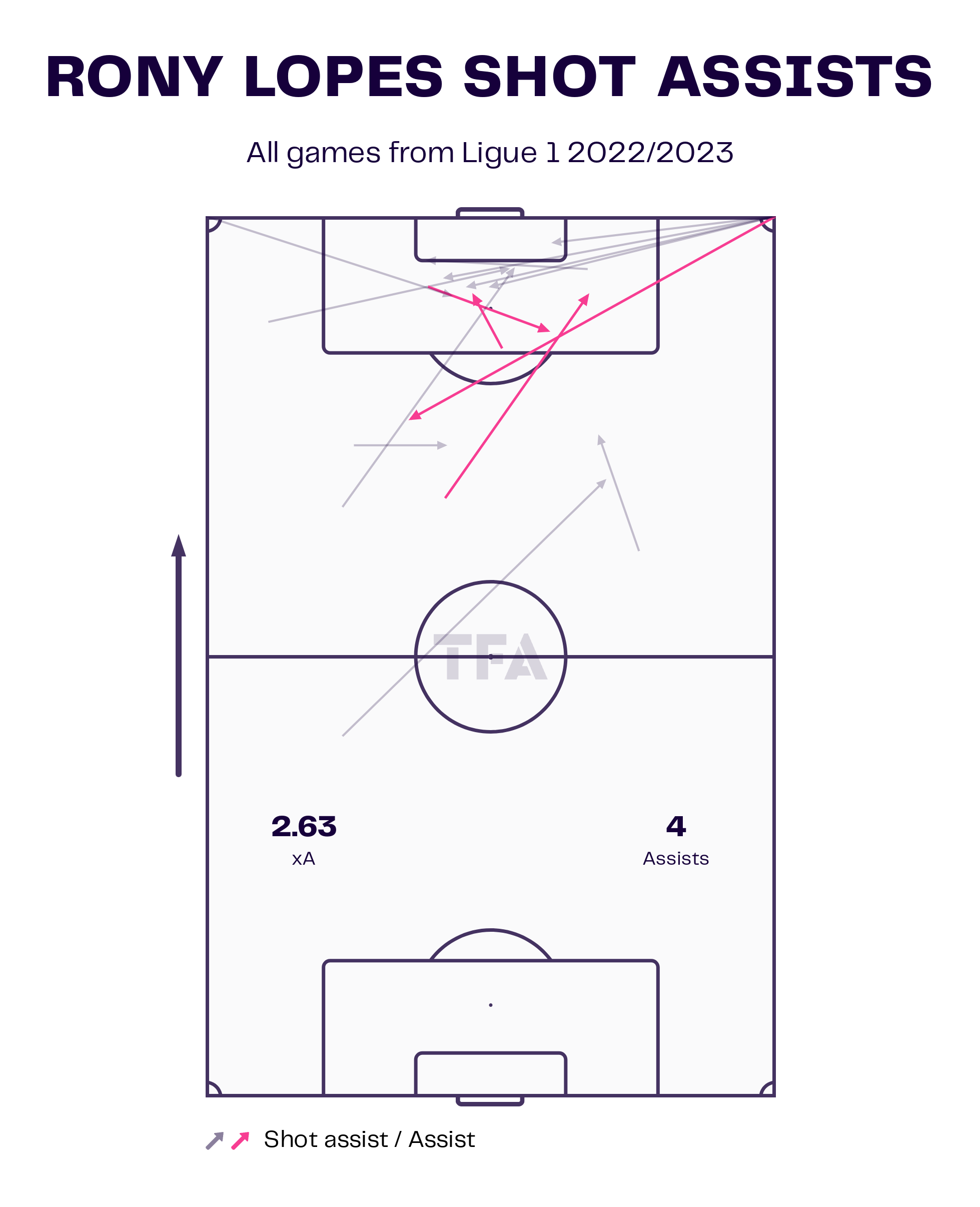 Lopes has four assists in the Ligue 1 2022/23 season for Troyes in 13 matches played. The above viz represents the shot assist map for Rony Lopes for the current season. It can be seen that the player is active on corner duty and also has an assist from there. He has an xA of 2.63 and also has a few shot assists from long balls. He averages 0.42 assists at present.

Ball progression on the pitch 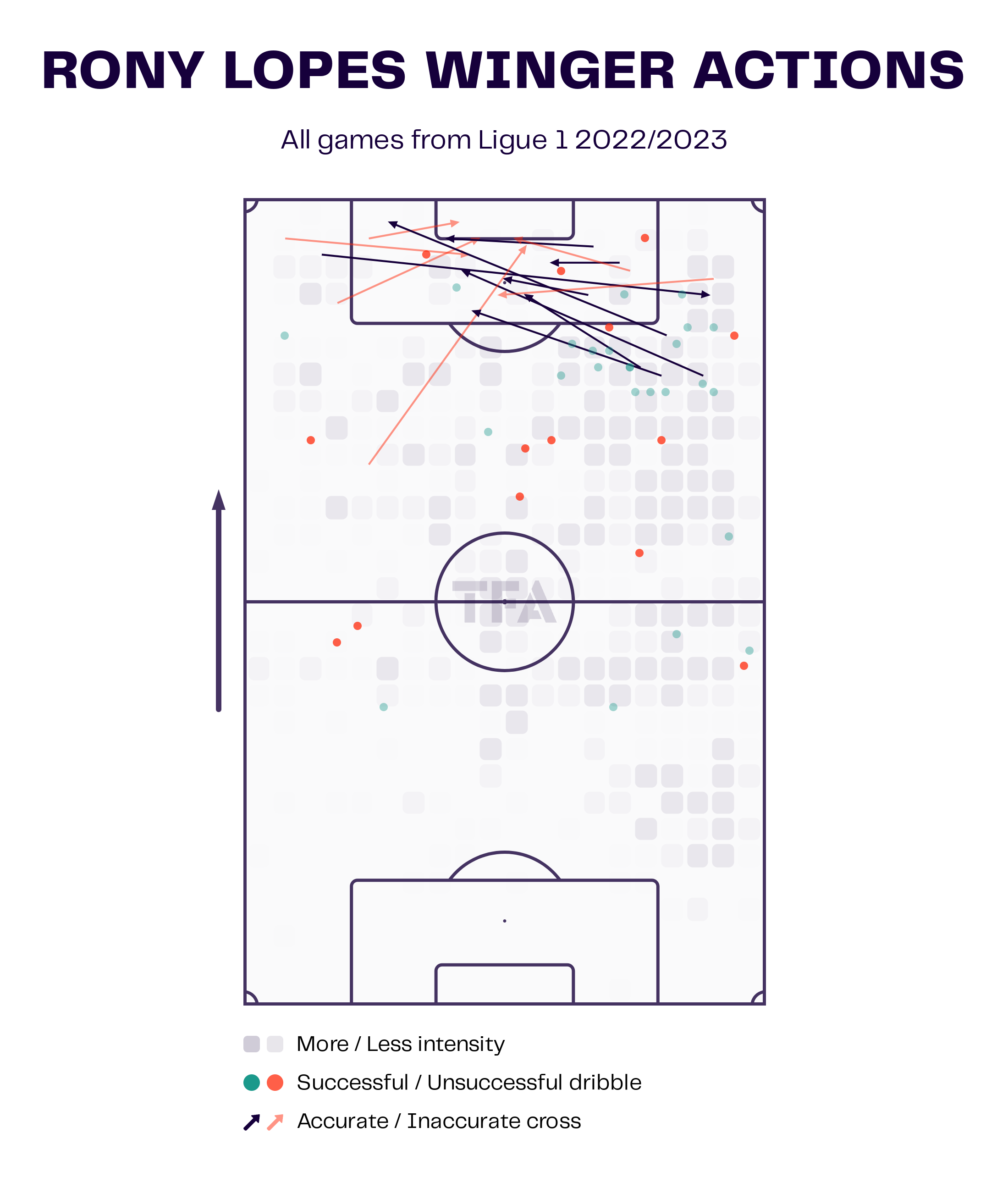 The above viz depicts Lopes’ winger actions in the current Ligue 1 season. He attempts to dribble inside the final third. There are many attempts to cut inside from the flanks on the right wing. Additionally, he makes 3.9 passes to the final third and 1.9 passes to the penalty area per 90, with an accuracy rate of 78.2 and 50 per cent, respectively. Additionally, he also makes 6.54 forward passes with a 67.7% rate of accuracy.

Interceptions in the final third 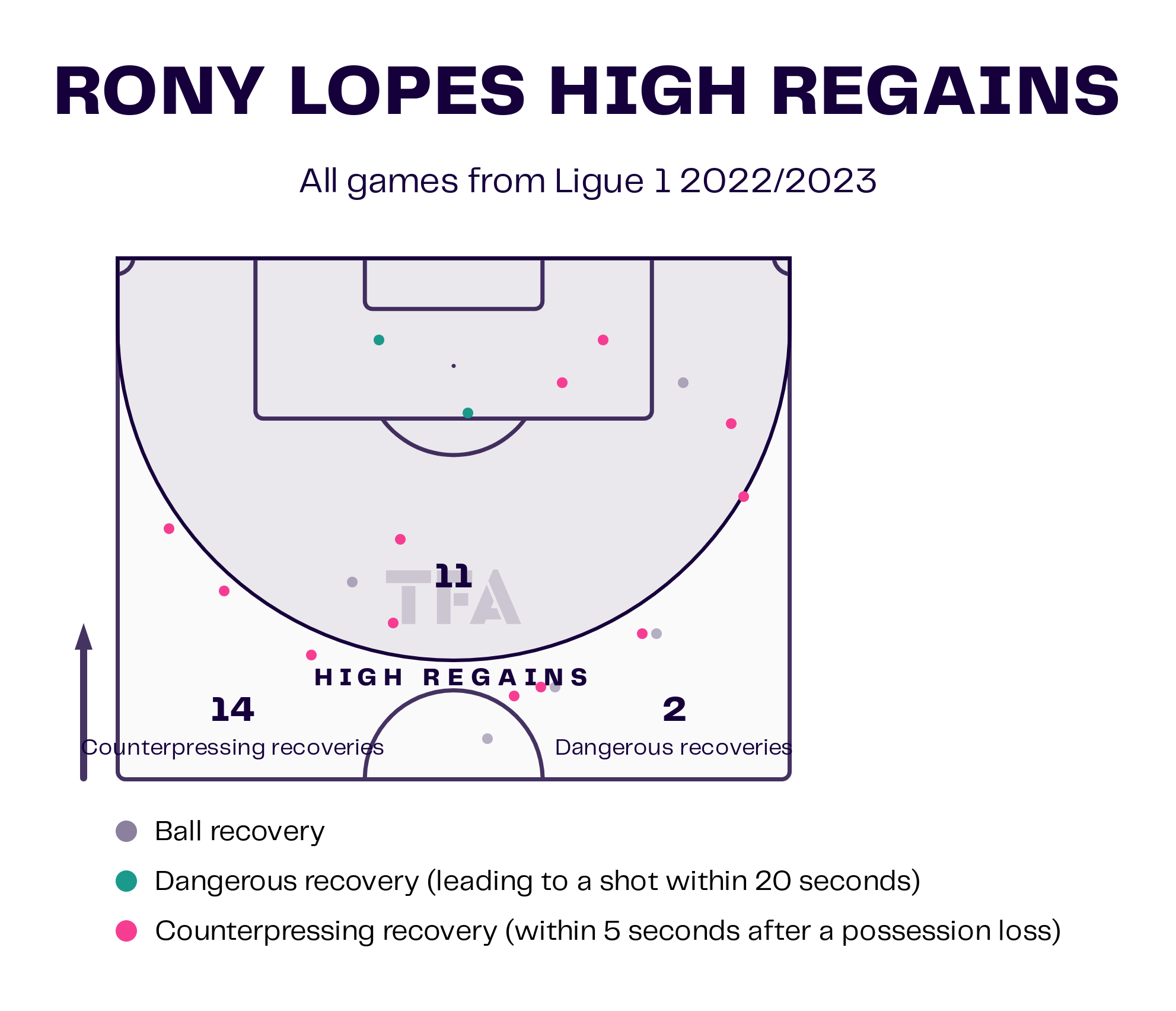 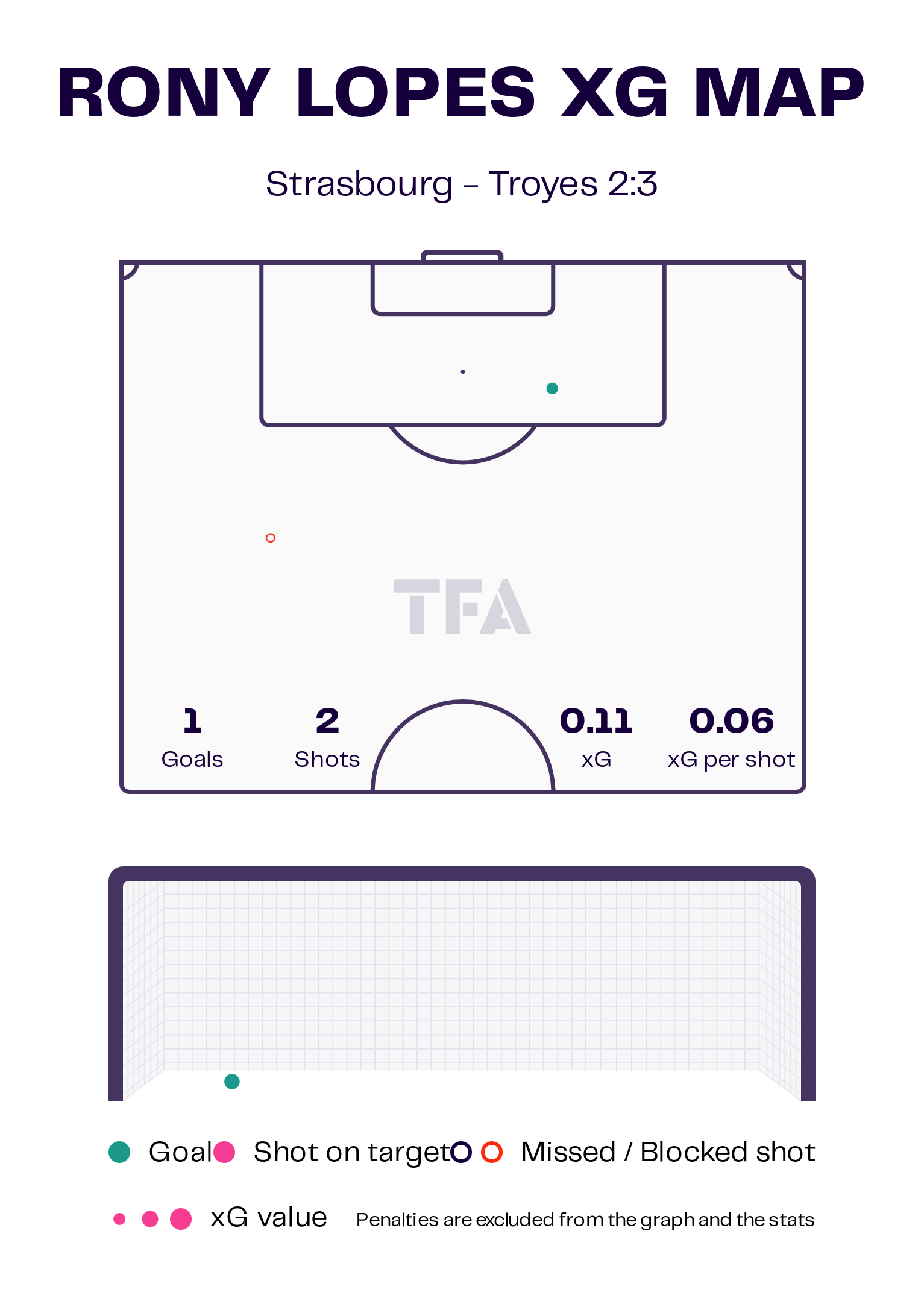 Ronny Lopes was the match-winner when they faced Strasbourg this season. The player scored one goal and provided one assist in a match in which Troyes won three goals to two. His contributions helped Troyes seal all three points. He had one goal from two shots and an xG of 0.11 for the match.

All in all, Rony Lopes is gaining momentum in Ligue 1 for Troyes and will hope to continue his spectacular form for his team this season. Troyes’s intelligent attacking and ball skills provide him with the necessary firepower. He has racked up a good number of goals and assists, and given this form, he may soon find a new destination in the upcoming future. But for the time being, Troyes’ focus is on staying afloat in Ligue 1 this season.

‘Changed as a player’- International midfielder still has a future at...

Under the Microscope: How Junya Ito is leading Reims to safety

Rennes vs PSG Preview: xG per 90, recoveries and key players