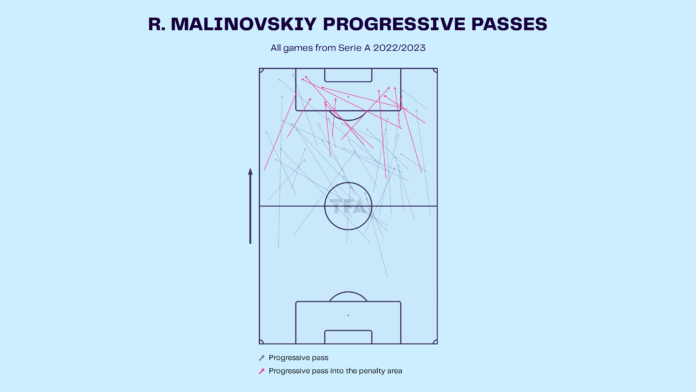 Ruslan Malinovskyi is a Ukrainian professional footballer who plays as a midfielder for Serie A club Atalanta and the Ukraine national team. He is a set-piece specialist and possesses a powerful and accurate shot with either foot. In the 2022–23 Italian Serie A season, Ruslan Malinovskyi has played five matches (plus ten as a sub). It seems the midfielder has gained interest from Ligue 1 club Marseille, who are impressed by the veteran’s skills in the midfield in Italy. Ruslan brings composure to the attack and likes to progress the game forward. Below are some stats for the current season showing what Malinovskyi can bring to the Marseille midfield.

Malinovskyi in Serie A 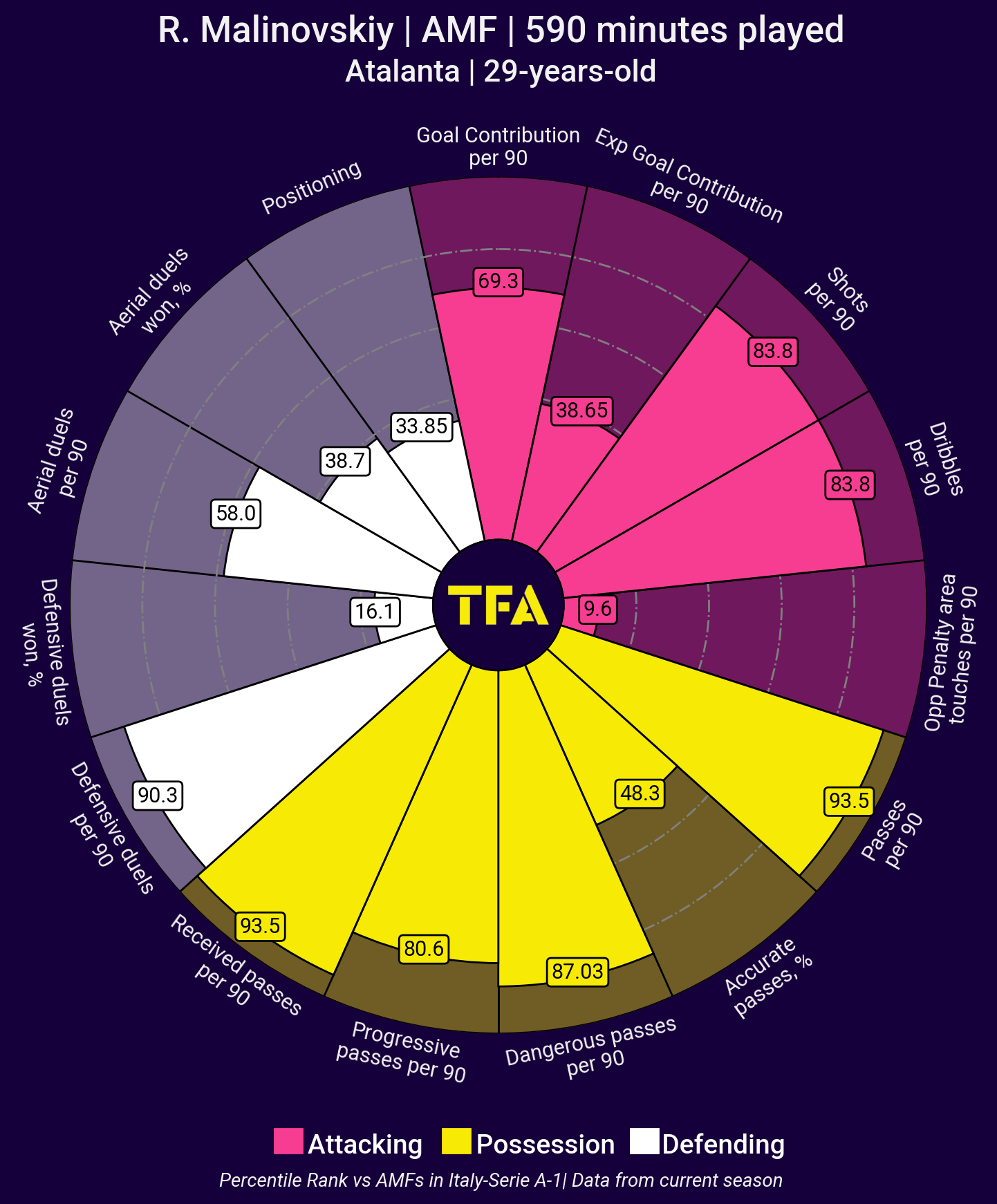 The above viz shows the percentile rank in comparison to the other attacking midfielders in Serie A. Ruslan’s possession stats are excellent for a midfielder. He is ranked highly for passes received and receives 33.37 passes per match. The player’s ability to defend has been decent. He is ranked high for shots and dribbles and takes 1.34 attempts on goal per 90. He has also maintained impressive attacking stats and ranks well in terms of passing abilities. 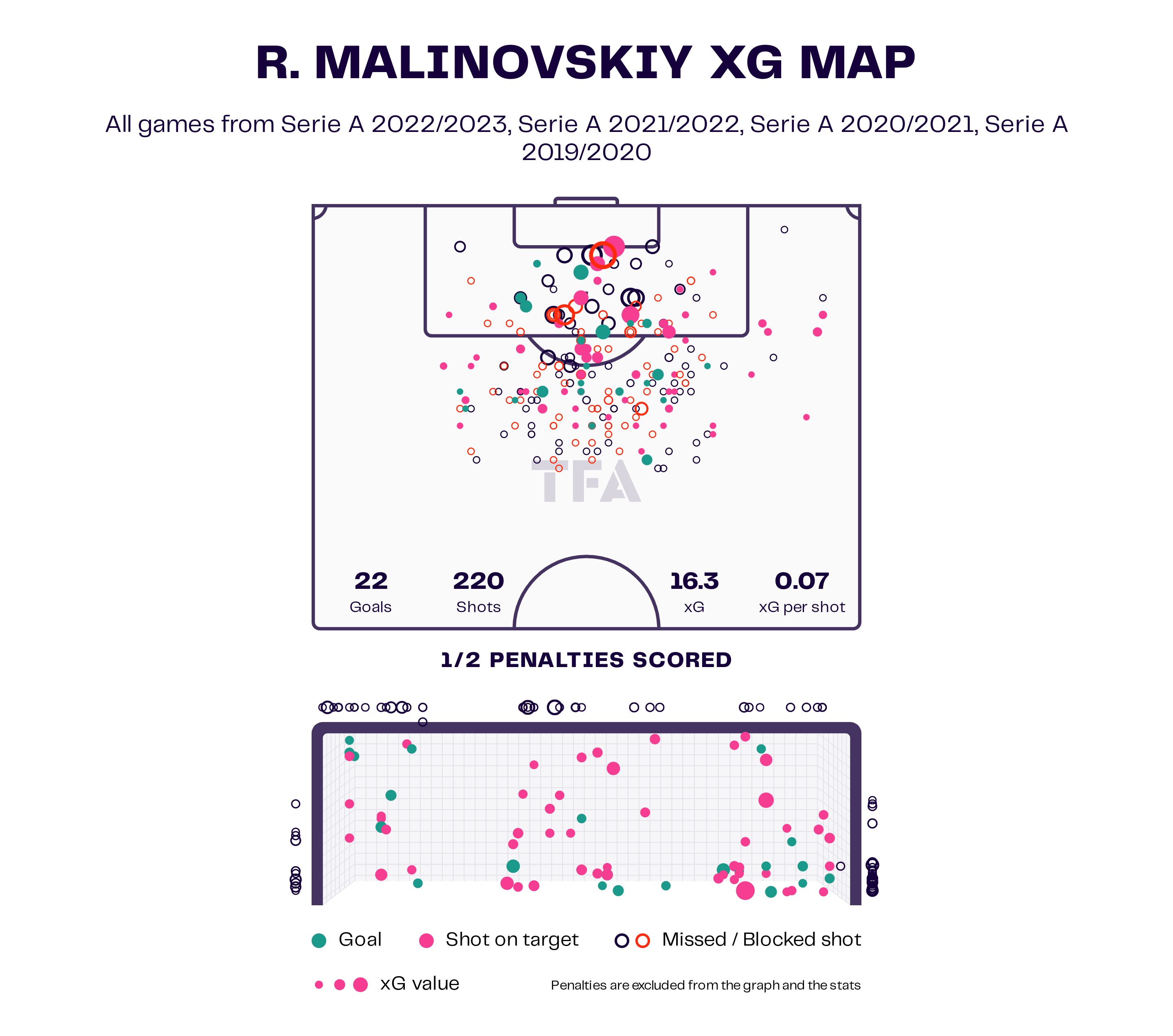 Ruslan Malinovskyi has made a total of 115 appearances for Atalanta in Serie A. He has scored 23 goals in those appearances from 220 shots attempted. He has an overall xG of 16.3 in Serie A and 0.07 xG per shot over all the seasons. It can be seen that he has scored most of his goals from inside the box. Ruslan also likes to take shots from a distance and has a few to his name from outside the box. 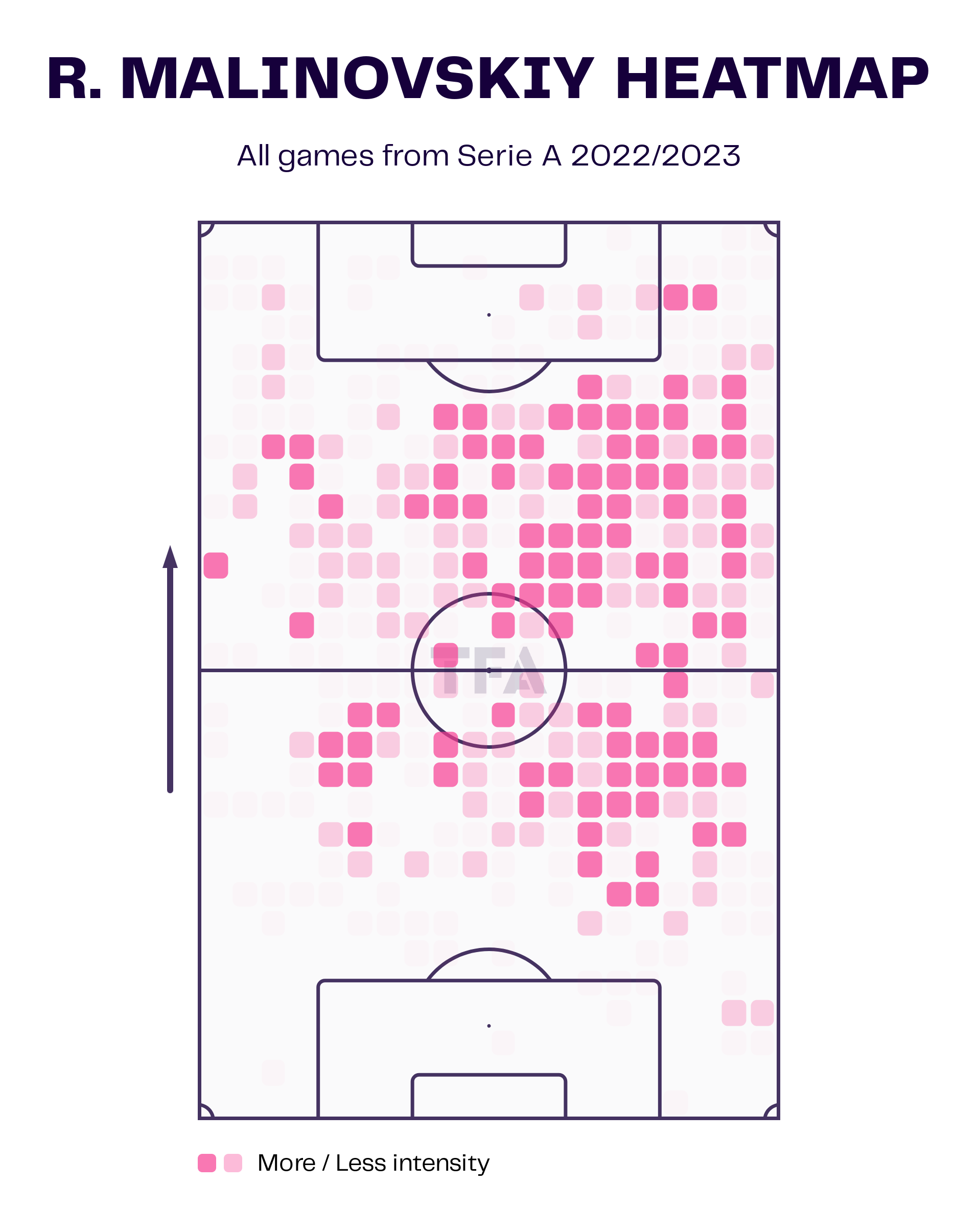 Malinovskyi covers the left central midfield area in the middle third for Atalanta. The player has also been used by his manager in different positions, like a centre forward, and on the right side of the midfield in a few games. He is primarily an attacking midfielder who likes to penetrate and press opponents high. He also performs defensive duties as a midfielder, and most of his intensity can be seen in the middle of the pitch for his team. Ruslan gets 0.89 touches in the opponent’s penalty area per 90 and is an expert at making forward movement for the team. 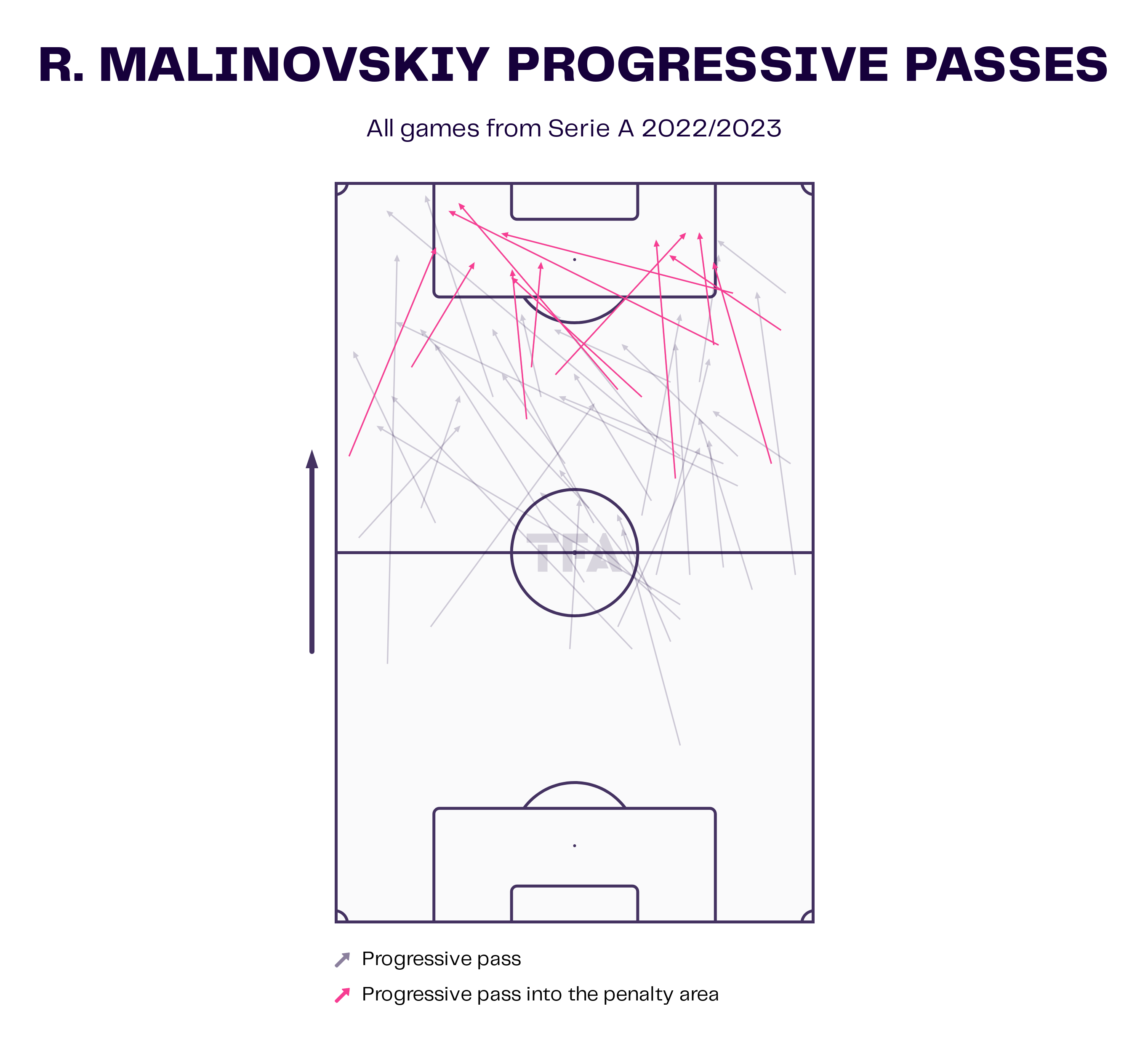 Ruslan Malinovskyi usually plays on the left side of the midfield and makes movements up the pitch in order to create an attacking threat and receive the ball in dangerous areas. Ruslan makes 45.37 accurate passes on average per 90 with a completion rate of 79.9%. It can be seen that the player makes many forward passes, averaging 14.13 per match, and makes 8.63 passes to the final third per 90. 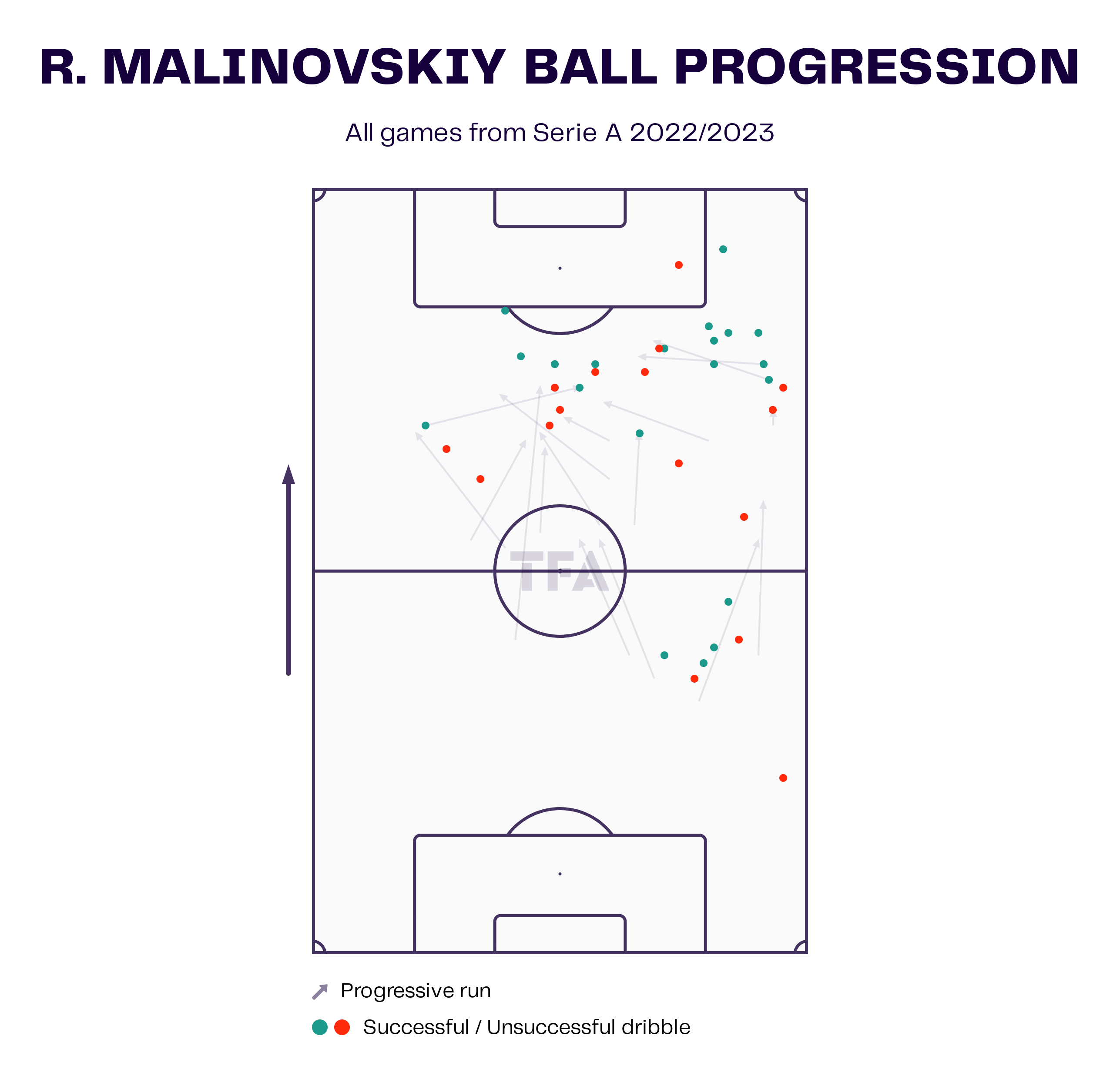 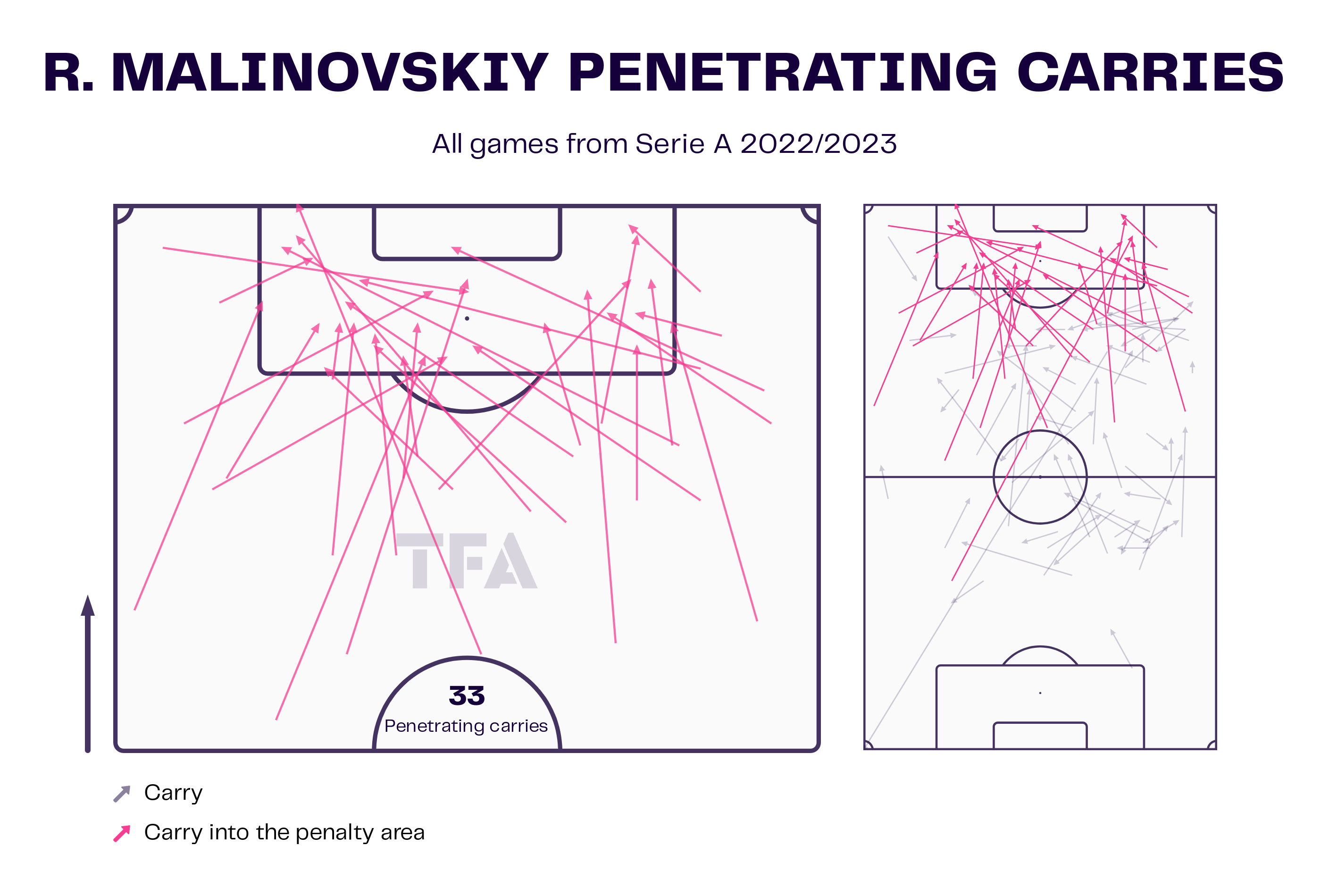 Ruslan Malinovskyi likes to play direct football through the middle of the pitch. He attempts 5.36 dribbles per match with 55.6% successful dribbles, and this has been a crucial advantage for the player and his team. Most of his action is in the middle and final third of the pitch. His confidence and ability to keep hold of the ball are what make him worth more and are one of the reasons behind his rising demand. He averages 2.53 progressive runs per match and makes penetrating carries into the penalty area. 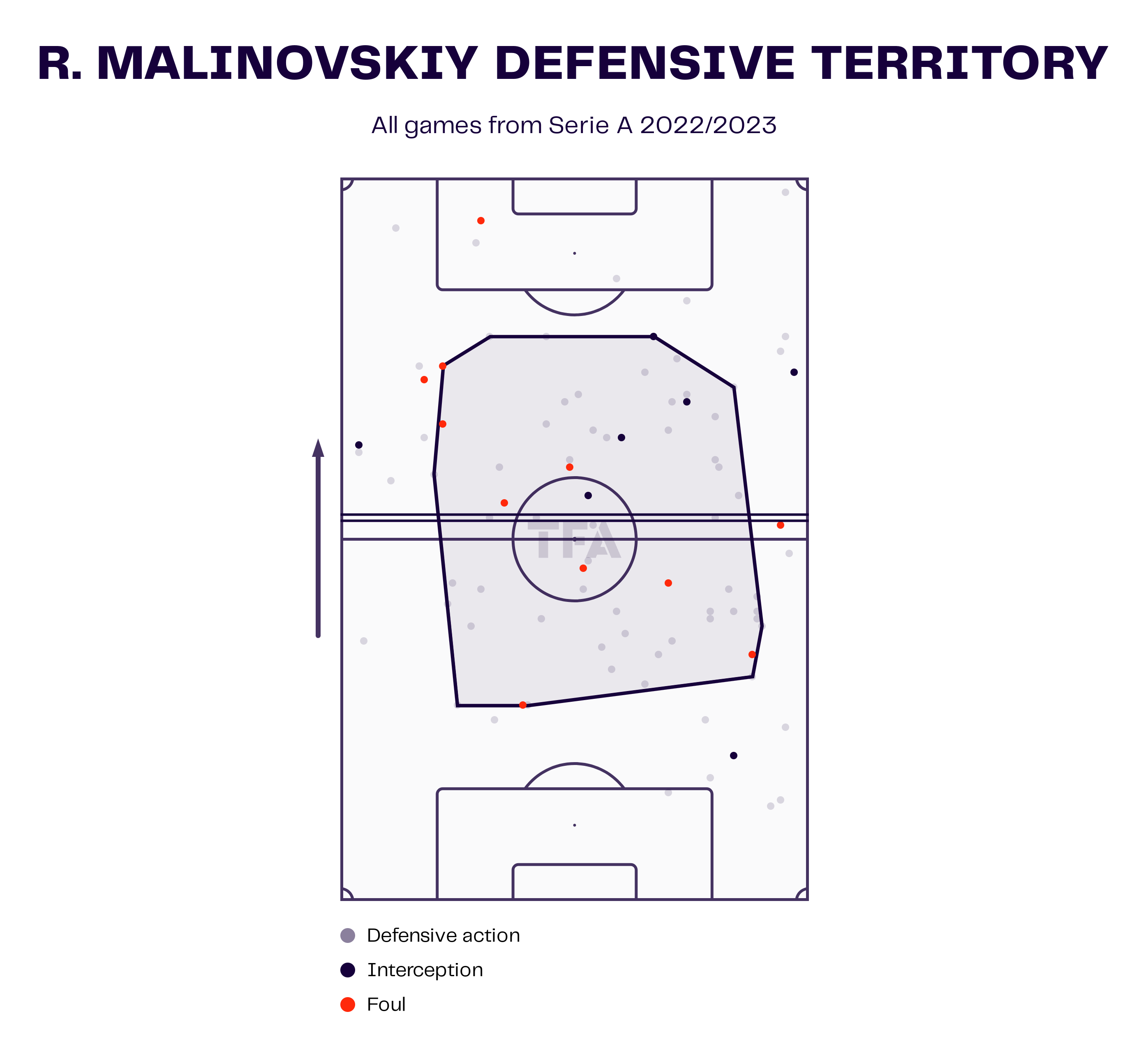 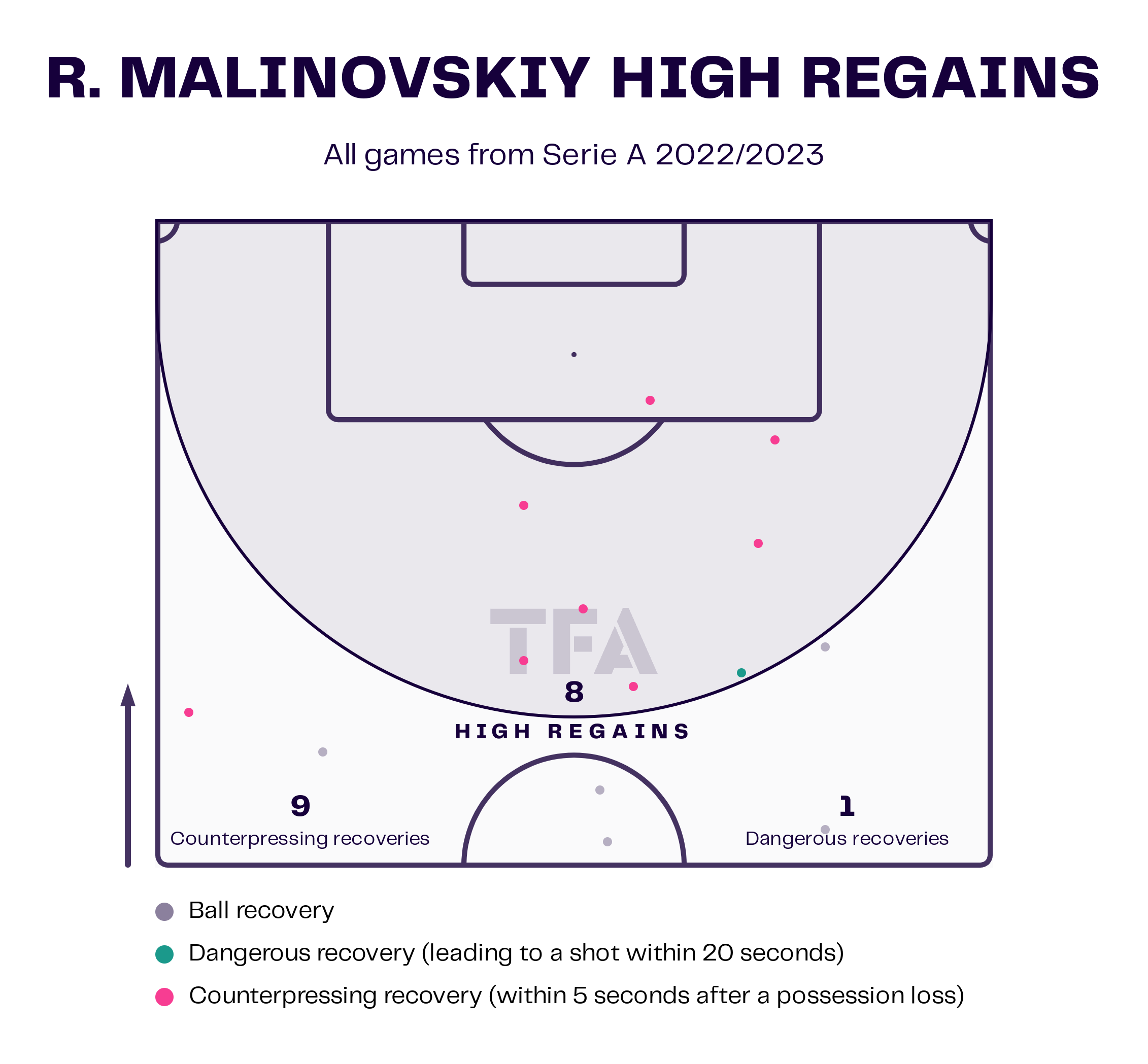 The above viz shows the defensive territory and various high regains of the player for Atalanta in Serie A 2022/23. It indicates that Ruslan is involved in a lot of defensive actions in the middle third and makes interceptions all around the pitch. It can be observed that the player has not given up many fouls and has averaged only 1.64 fouls in the current season. Overall, he has an average of 25.88 duels per 90 and a 55.6% win rate. Malinovskyi averages 1.64 interceptions per 90 minutes and makes a lot of movement in the opposition’s half in order to put high pressure on the opposition’s midfield and final third. He makes 4.46 recoveries in the opposition’s half per 90.

Replacement for the injured 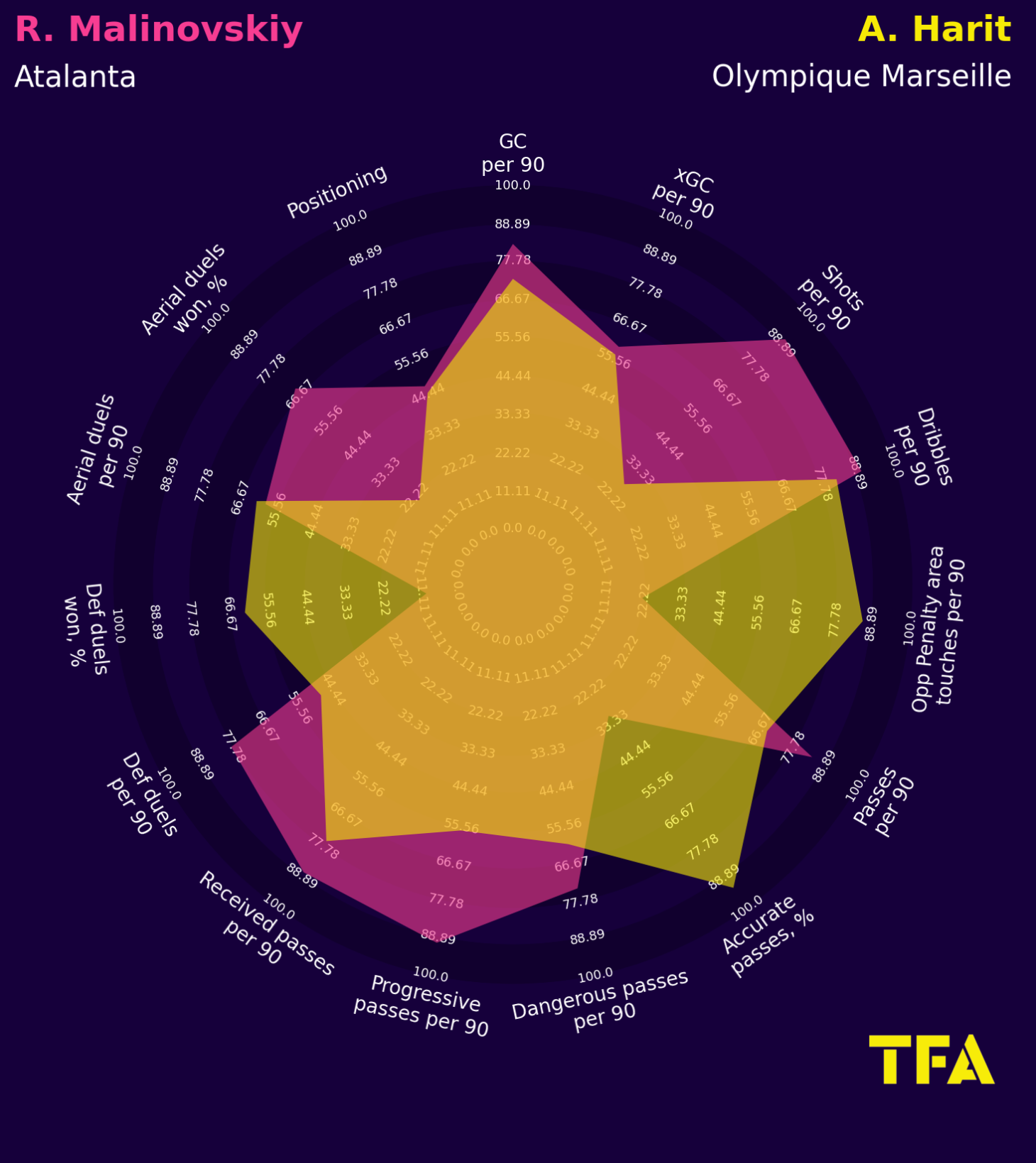 Amine Harit impressed during the World Cup but is most likely out for the rest of the season due to an ACL injury. Marseille are looking for a player with similar characteristics in midfield, and Malinovskyi is a good match for the profile. Both players are predominantly attacking midfielders and can adapt to different positions. The above viz is a comparison between the two players, and it can be seen that Ruslan has higher goal contributions per 90 minutes. He also fares better in aerial duels won and progressive passes per match.

Finally, given Malinovskyi’s hard work ethic and offensive abilities as a central midfielder, as well as his powerful left-footed shot, it seems Marseille will be a good fit for the veteran Ukrainian. It will be challenging, as he will have to gain the trust of his new manager and his teammates, but should he continue to provide the same level of effort as he did at his previous club, the French side may have something truly special in store. His confidence, ability, and experience in the midfield is highly valuable to Marseille, and they will be happy to join hands with a player who brings the team plenty of attacking action.

PSG rejected the offer to sign world-class talent and here is...

Transfer Analysis: Why are Monaco pursuing the Croatian defender from Dynamo...