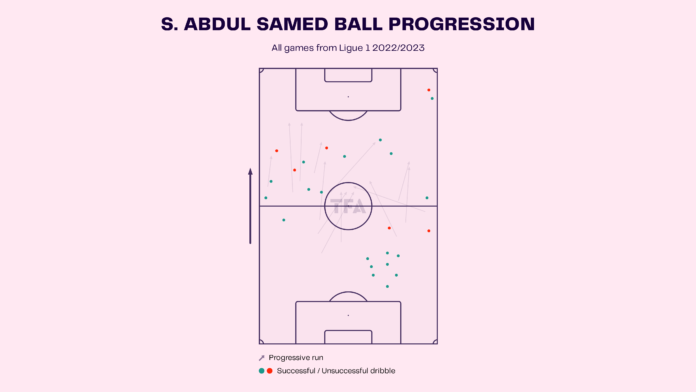 Salis Abdul Samed, after representing Ghana at the World Cup this year, has impressed many around the world. He is now playing for an exciting and ambitious Ligue 1 side chasing a star-laden Paris Saint-Germain at the top of the table. This is the reality for the defensive midfielder. Abdul Samed was ranked second in Ligue 1’s distance covered metric, covering an average of 12.2 km each game for Lens. Of course, there’s a lot more to it than just running to his game. At 22 years, the Ghanaian midfielder has slotted seamlessly into the crucial role at the base of Franck Haise’s midfield. It’s no small feat, as Lens fans grew to love the midfielder. Let us look at some of the stats that the lens defender has put up this season. 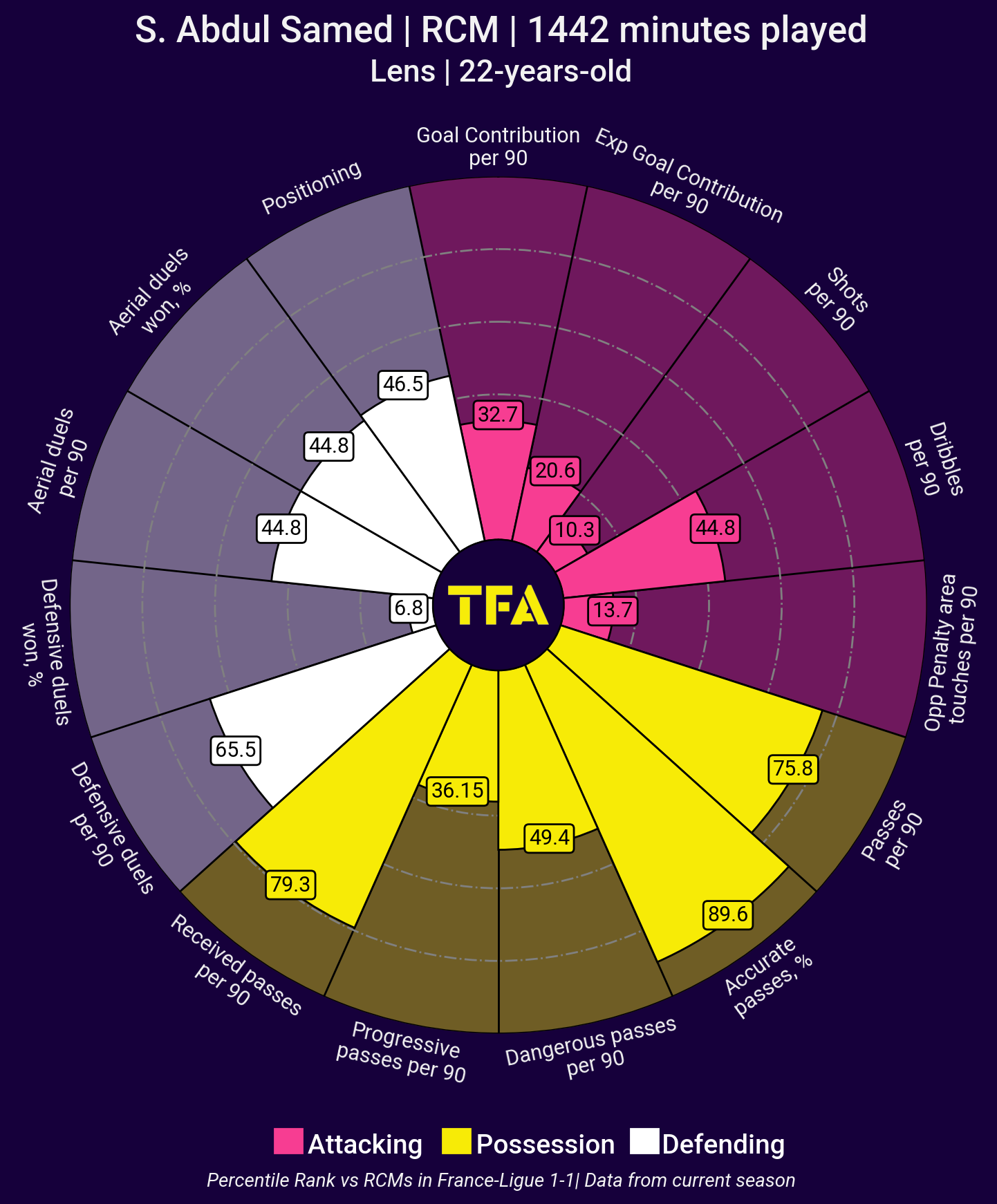 The World Cup is often a showcase for young, underrated talents such as Abdul Samed. Despite a mixed campaign in Qatar for Ghana, Abdul Samed started all three group games. The above viz shows the percentile rank of Samed in attacking, defensive, and possession stats compared to other right-central midfielders in Ligue 1. Salis has generally performed well in his defensive duties. In terms of possession, Salis dominates passing accuracy and ranks well for passes per 90 minutes. 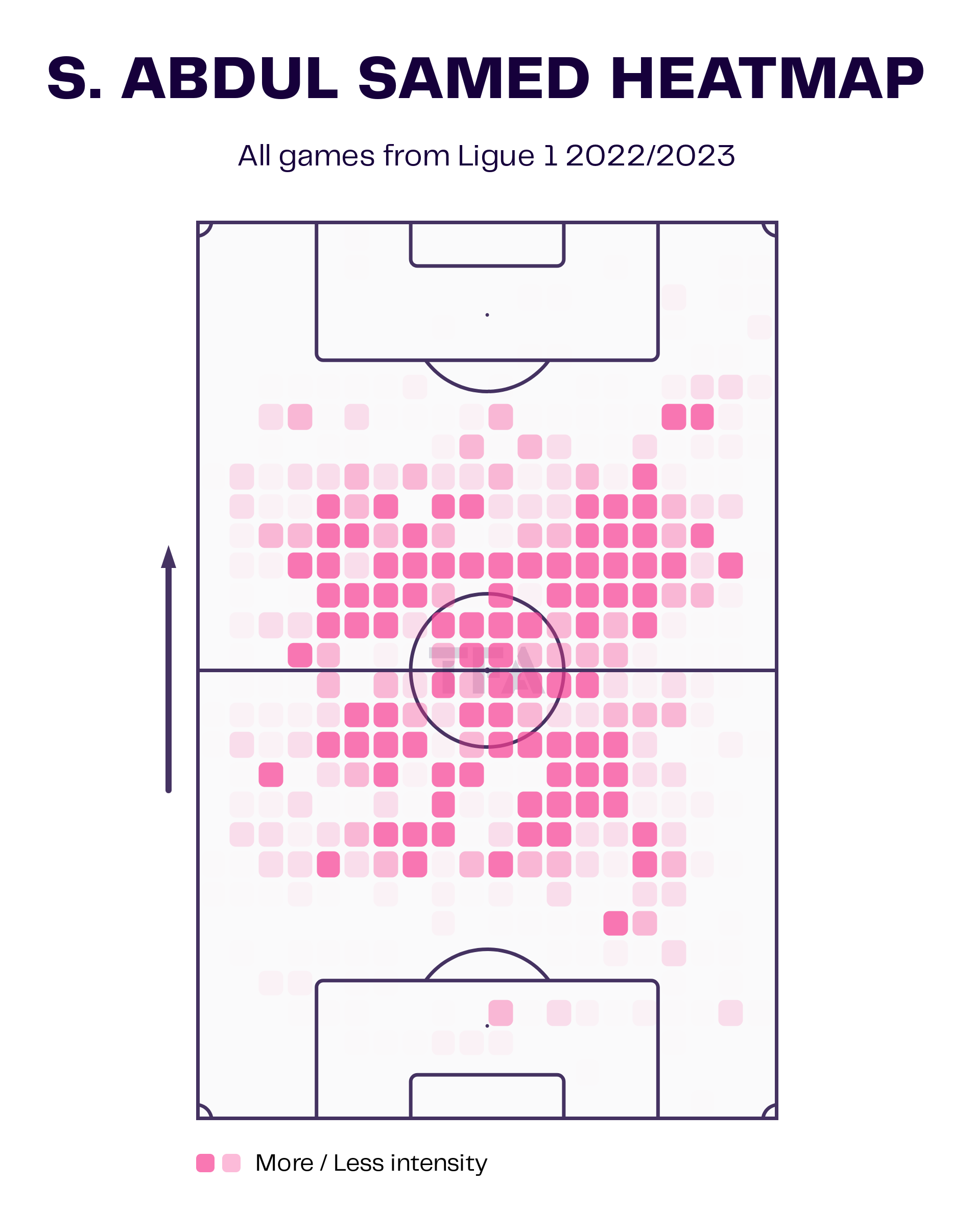 The above viz depicts Samed’s heatmap for the 2022–23 Ligue 1 season. It can be observed that Salis covers most of the pitch. Additionally, he displays a lot of intensity in the middle of the pitch and performs most of his defensive duties for Lens in that area. Salis manages to make 1.5 dribbles per 90, which is among the top 20 in Ligue 1 for right-defensive midfielders. 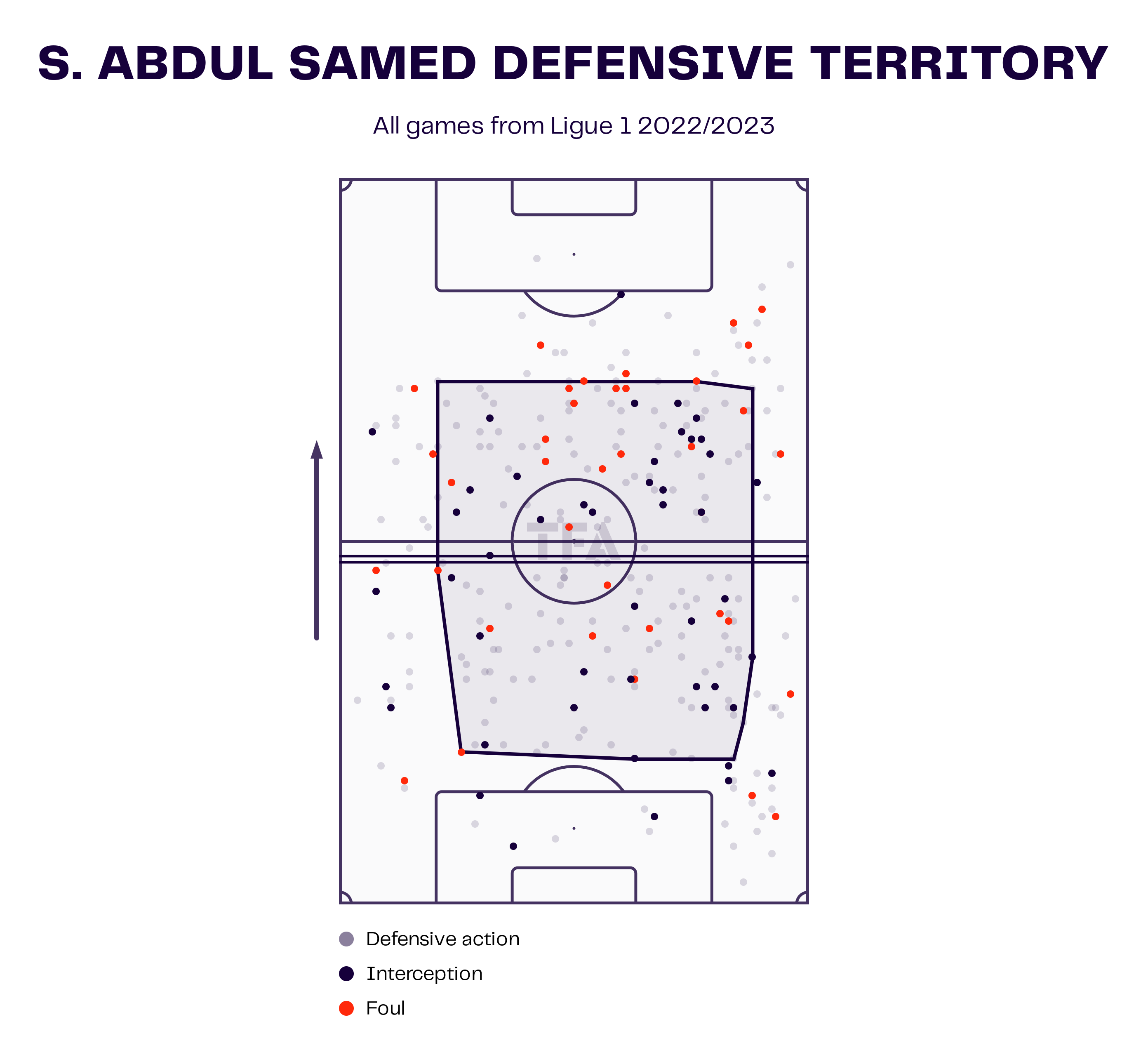 Salis Abdul Samed is an important asset for Lens due to his extensive match distance. He is mainly present on the pitch near the half-line. Samed is constantly running around to recover the ball. He also makes himself available to receive the ball in the right areas at the right time. The above viz depicts Salis’ defensive territory while playing for Lens. He does the majority of his defensive work in the midfield and makes the most of interceptions there. 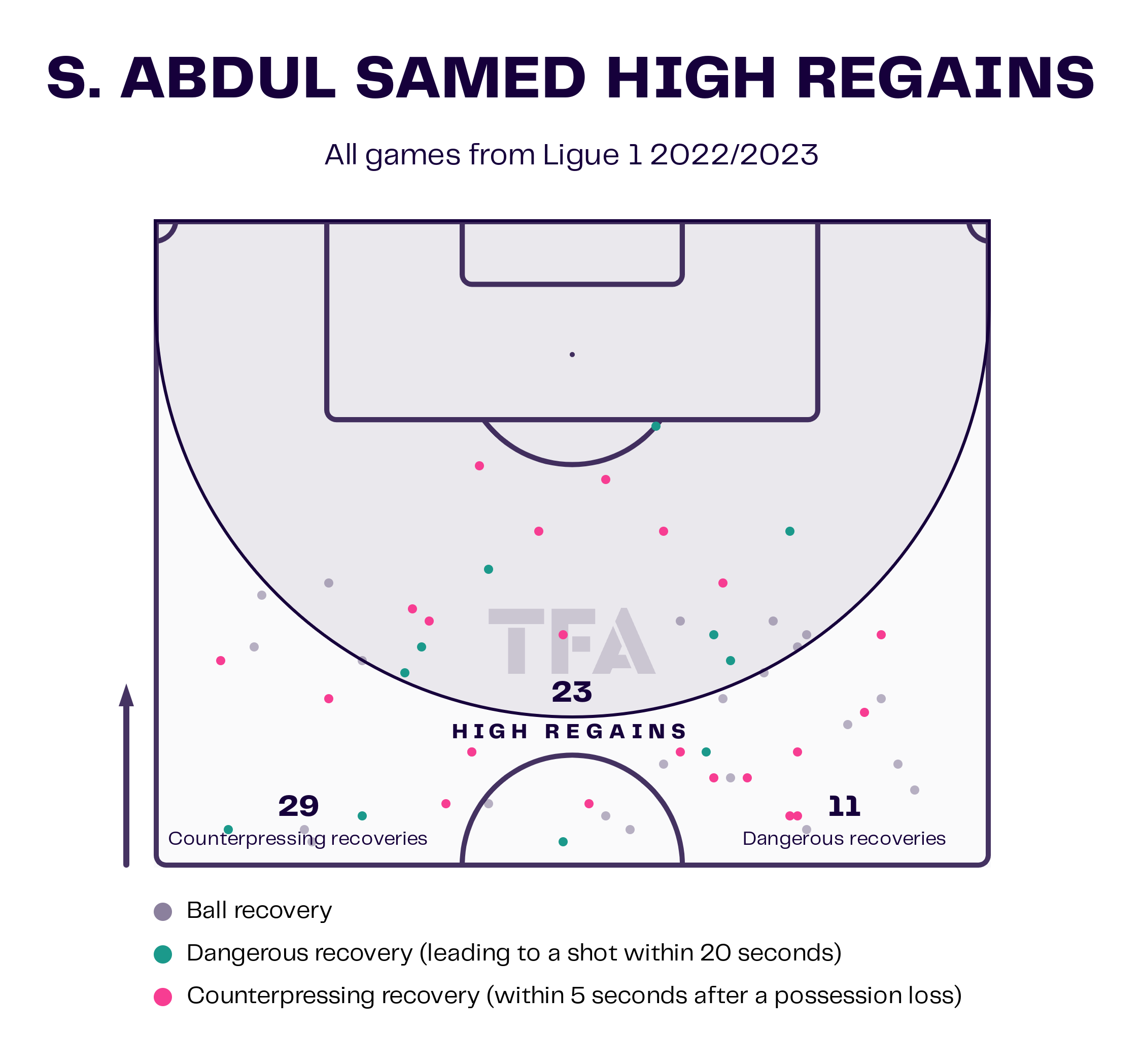 The above viz depicts Salis Abdul Samed’s high returns from all games in the Ligue 1 of 2022/23. He has a total of 23 high regains. Additionally, Salis makes attempts to recover the ball quickly, making 29 counter-press recoveries. He also contributes to 11 dangerous recoveries overall. 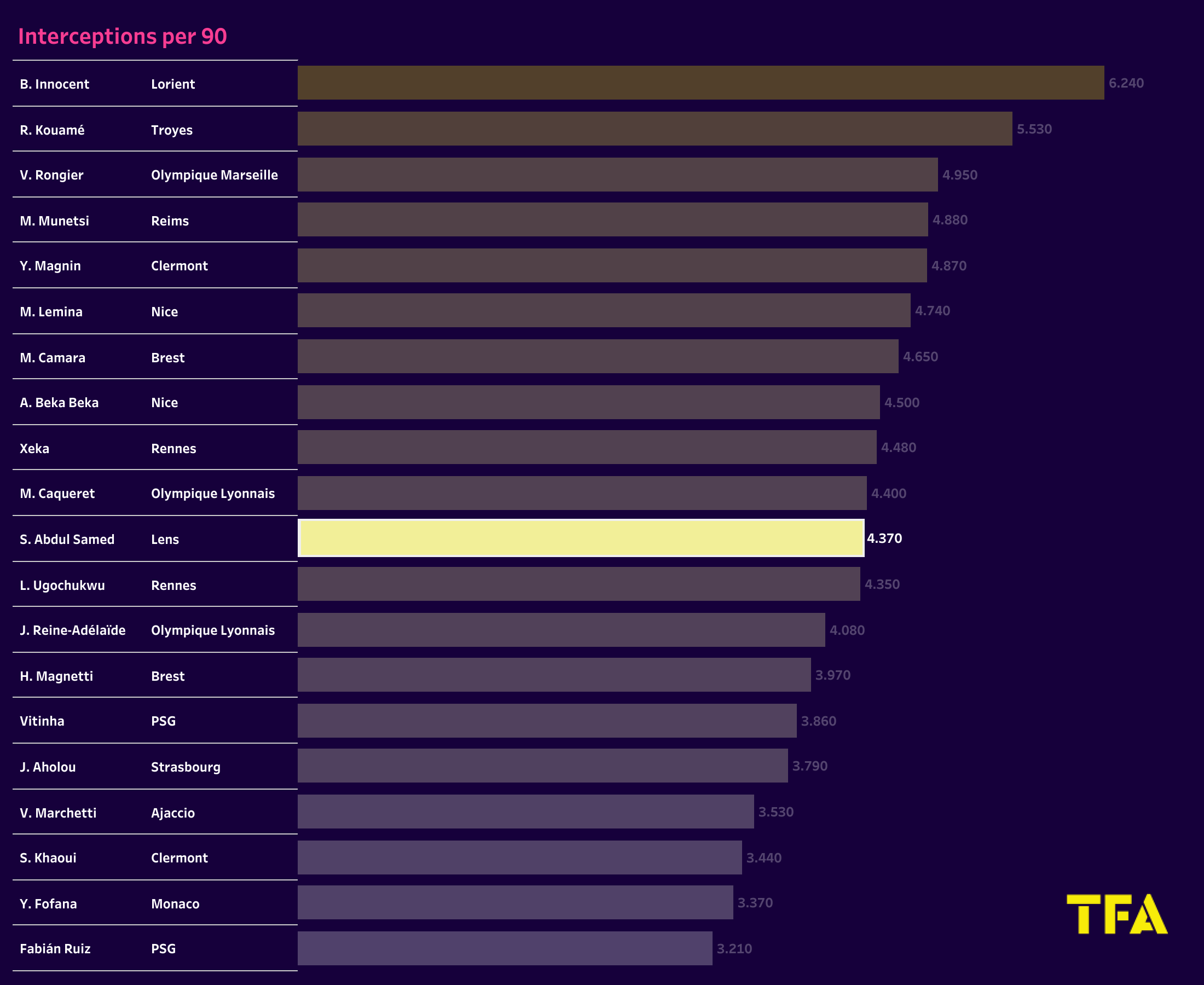 In terms of interceptions made per 90 minutes, Salis Abdul Samed ranks 11th among the right central midfielders in the Ligue 1 2022–23 season for Lens. Additionally, he averages 4.37 interceptions per 90 minutes. He works by constantly putting in the effort to intercept the opposition’s play. Salis makes an overall average of 0.82 progressive runs per match, which is a decent amount. Especially for a defensive midfielder who usually helps move the ball upfield.

Samed with the ball 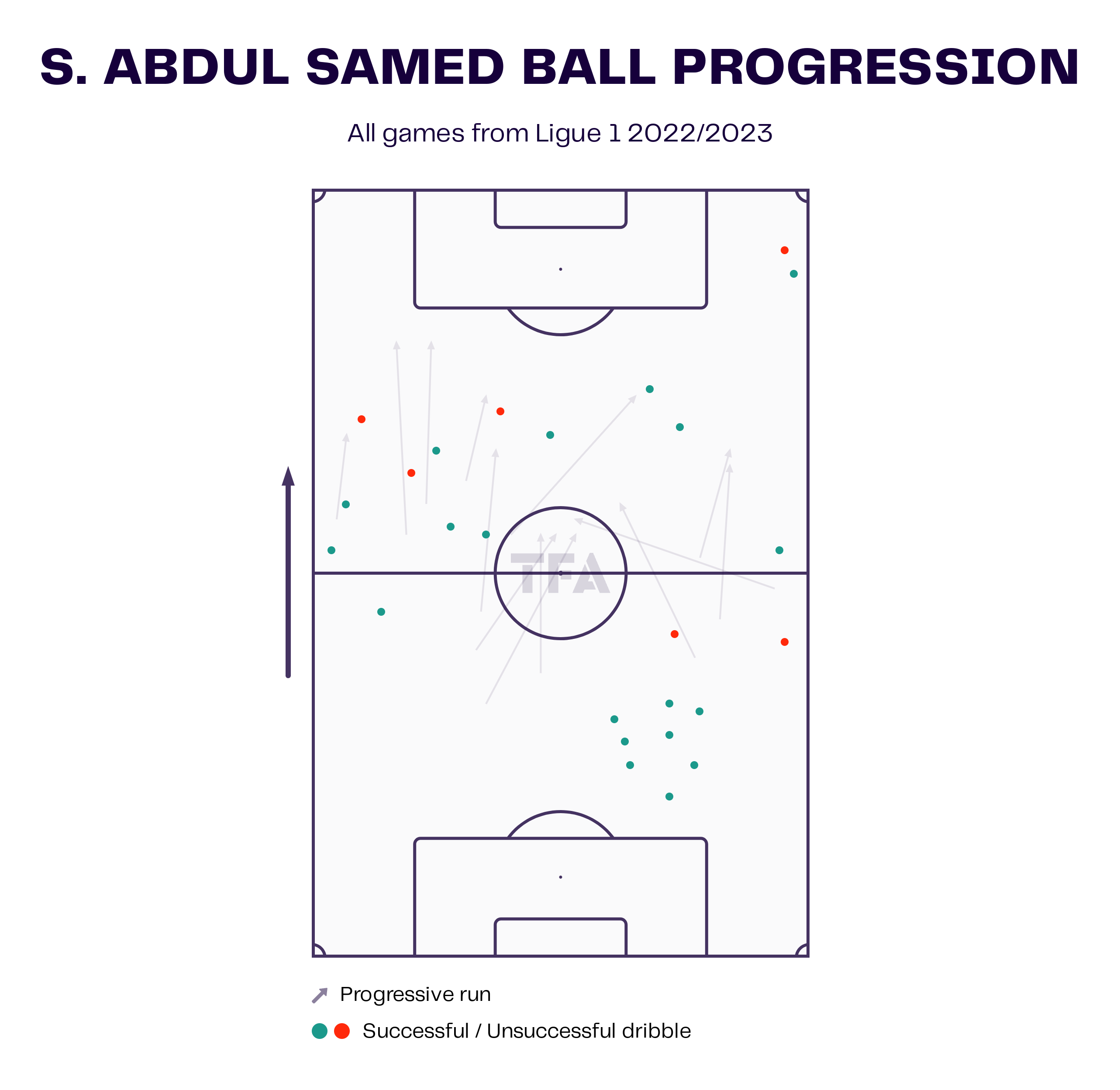 In the 2022–23 French Ligue 1, Salis Abdul Samed has played 15 matches. They have one shot on target from a total of four shots and have scored one goal (0.26 xG). Salis Abdul Samed averages 61 passes per match with a pass completion rate of 92%. The above viz depicts Samed’s ball progression stats against Lens during the Ligue 1 2022–23 season. It can be observed that he has most of his progressive runs in the opponent’s half. Samed has plenty of successful dribbles clustered in the defensive thirds of the right half. He also has successful dribbles in the middle third of the pitch.

Having performed solidly in a tough group, facing Uruguay, Portugal, and South Korea, one of Ligue 1’s best-kept secrets is no longer a secret. In 2023, Ghana’s rising star will aim to become the driving force behind Lens’ return to Europe and a possible Champions League charge in Ligue 1. However, the incoming Abdul Samed’s underrated work in positional play, ball retention, and passing has acted as the springboard for some of Lens’ more deadly attacking play this season. He’s a young man with ambition, and his performances in Ligue 1 have more than merited a good spot for Lens in the 2022–23 season so far. His stats suggest that he has been a crucial contributor to Lens’ success this season, and Lens will be counting on him to keep on delivering.

PSG vs Nice French Cup, Round of 16 – Match Preview

PSG rejected the offer to sign world-class talent and here is...