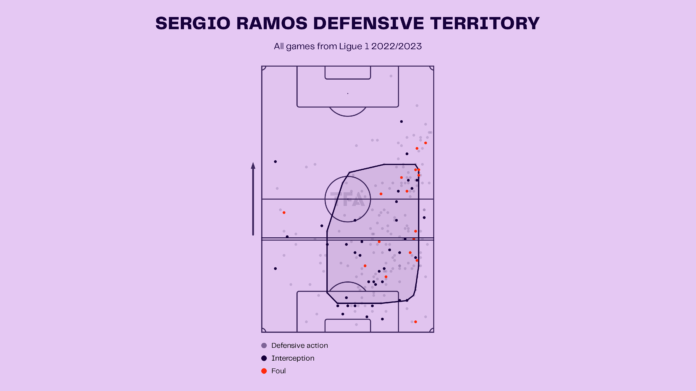 Sergio Ramos, the Spaniard who plays as a centre-back for Ligue 1 club Paris Saint-Germain and the Spain national team. Known for his aggressive play, ball retrieval ability, and prolific goal-scoring abilities, he is widely regarded as one of the greatest defenders of all time, having formerly played for Real Madrid for sixteen seasons, winning four UEFA Champions League titles with the Spanish giants. After an illustrious career in the Spanish capital club, Sergio Ramos made his move to the French capital in 2021 and is currently playing his second season for the Parisians. He finished his first season having made 12 appearances for PSG and managed to score two goals for the French outfit. He has been putting up impressive displays in the PSG backline and still looks like a force to be reckoned with on the pitch.

As a defender, Sergio Ramos has conceded 13 goals and kept eight clean sheets in 17 matches in the Ligue 1 2022/2023 season. That means when Ramos is on the pitch, his team concedes a goal every 106 minutes. He is playing his second season for the Parisians and has been a crucial part of PSG’s backline alongside club captain Marquinhos. His experience will come in handy for PSG deep into the season. Below are his stats from the current season in Ligue 1 for PSG. 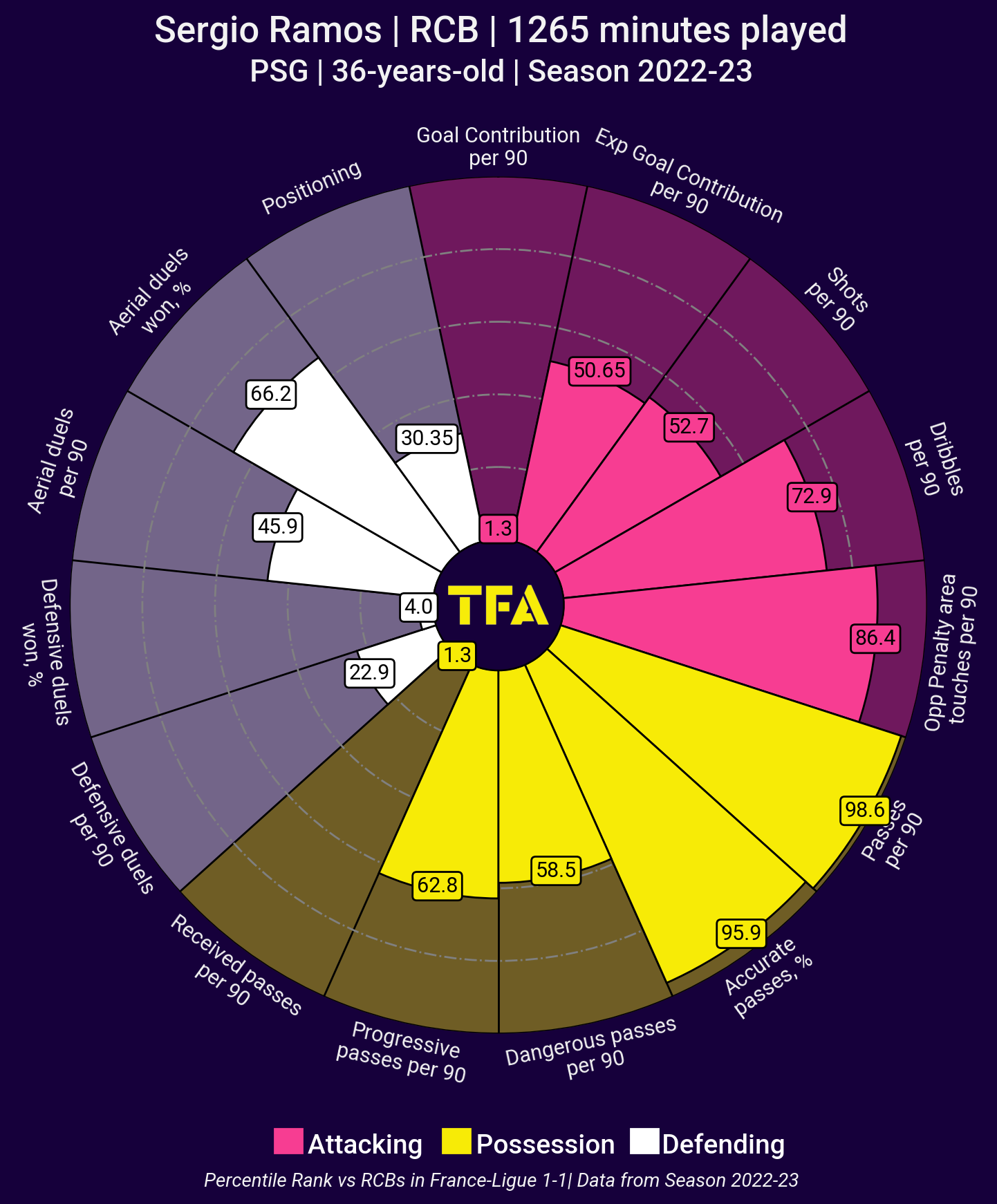 The above viz shows the percentile rank in comparison to the other defenders in Ligue 1. Sergio Ramos’ possession stats are good for a defender. He is ranked highly for pass accuracy and passes per match. The player’s ability to defend has been decent. He is ranked high for shots and dribbles and takes 0.43 attempts on goal per 90. He has also maintained fair attacking stats for a central defender and ranks well in terms of getting touches in the opponent’s penalty area. 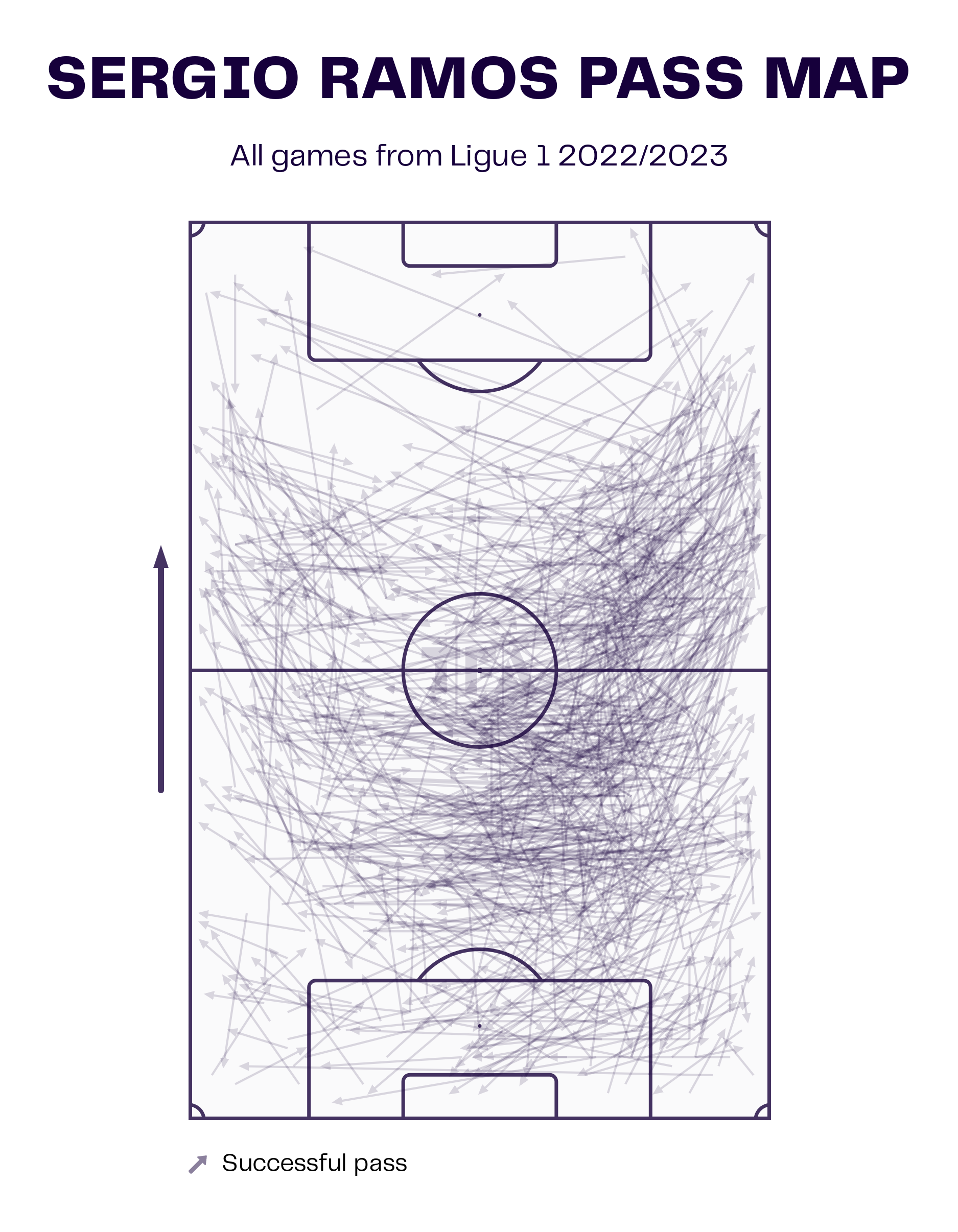 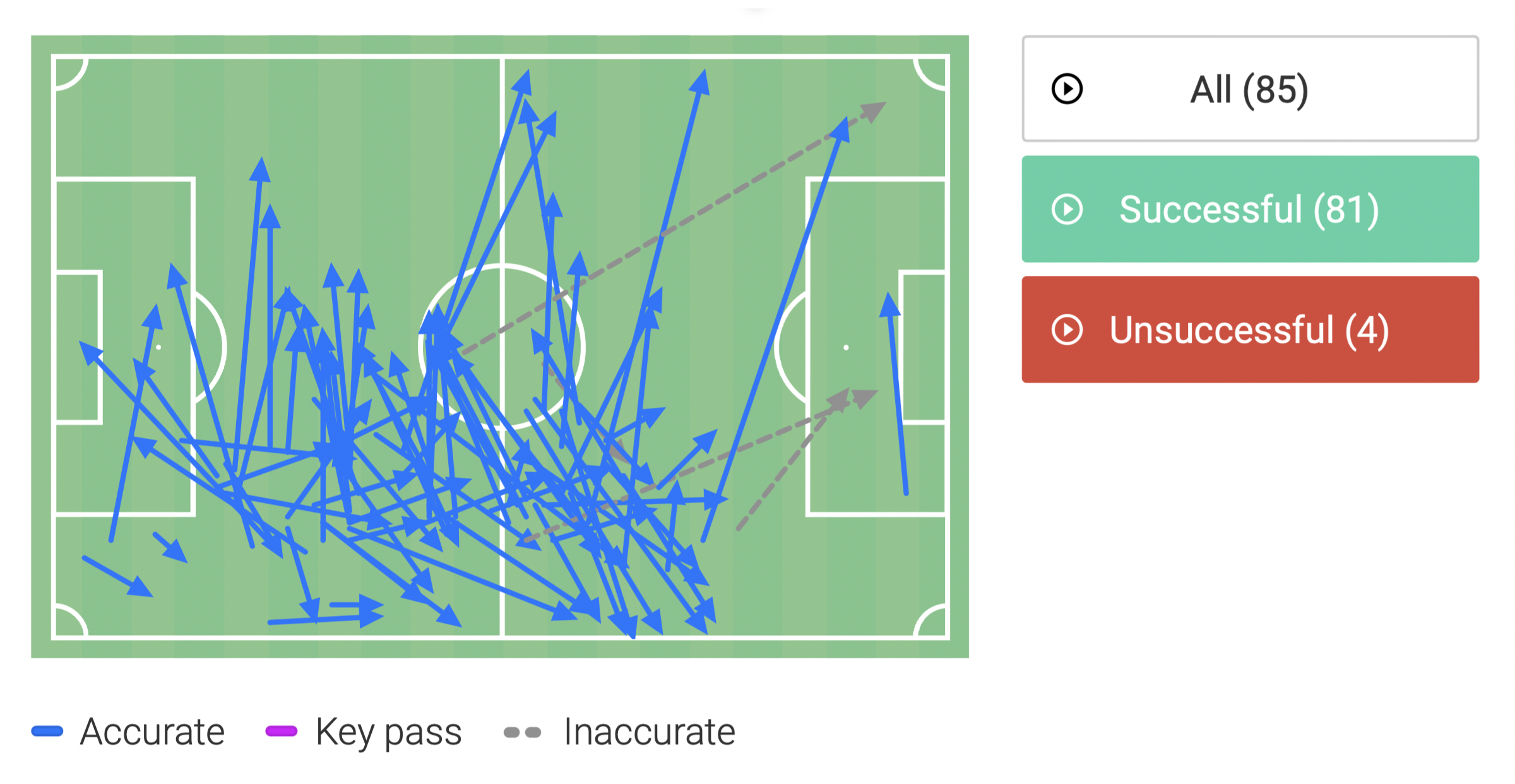 Ramos plays as a right centre-back and uses the entire right side of the pitch in order to advance the ball. Looking at his passing aspect of the game, Ramos passes the ball roughly 76 times during a game with a pass completion rate of 95.3%. He also plays 8.8 passes to the final third each game, which leads to a significant threat for the opponents. He has zero assists so far this season and makes 0.8 passes into the penalty area on average.

Against Reims, Ramos made 81 successful passes out of 85 attempted, out of which 14 were made into the final third. Most of his action takes place in order to move the ball around the backline and switch play from one full-back to another. 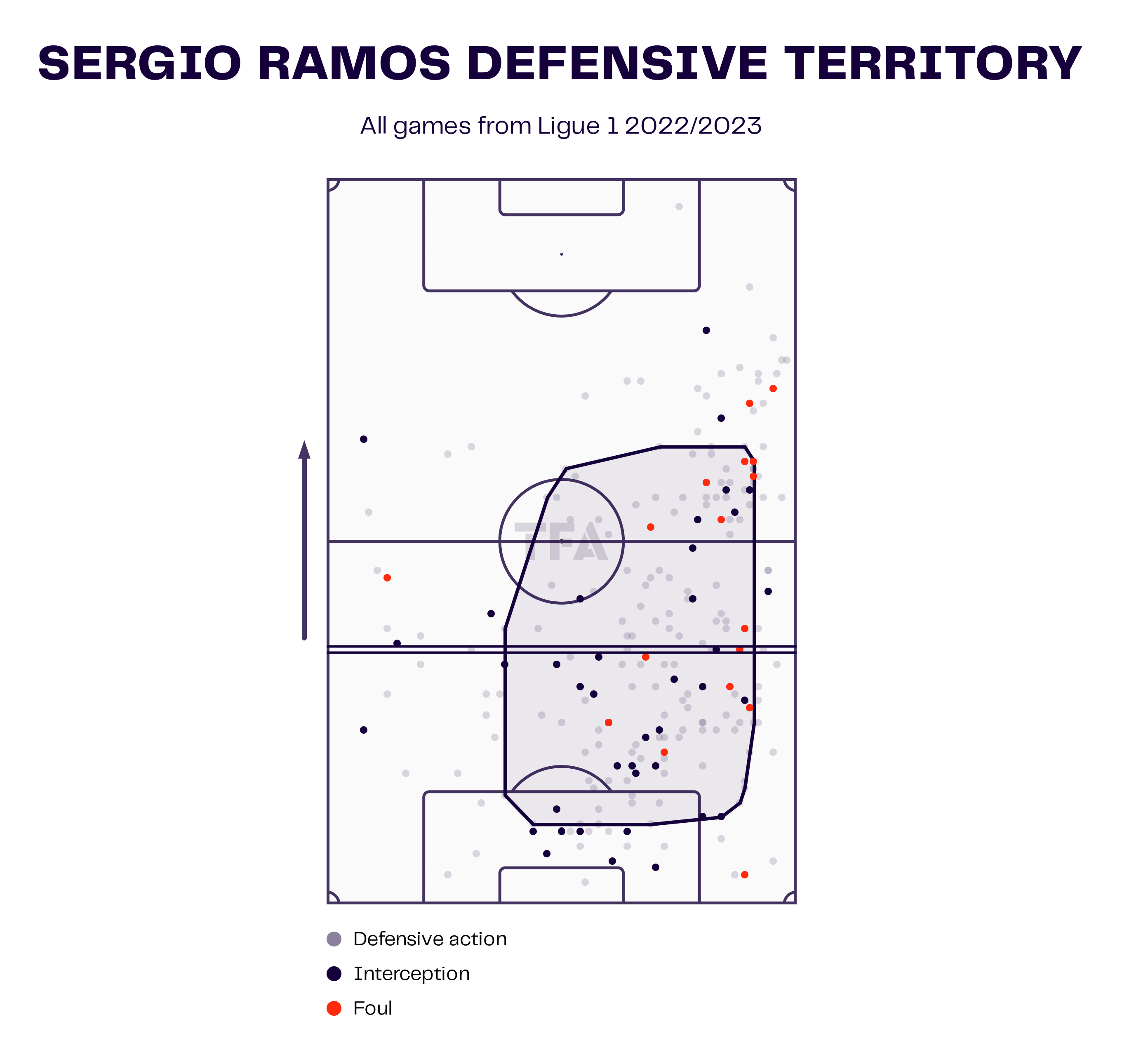 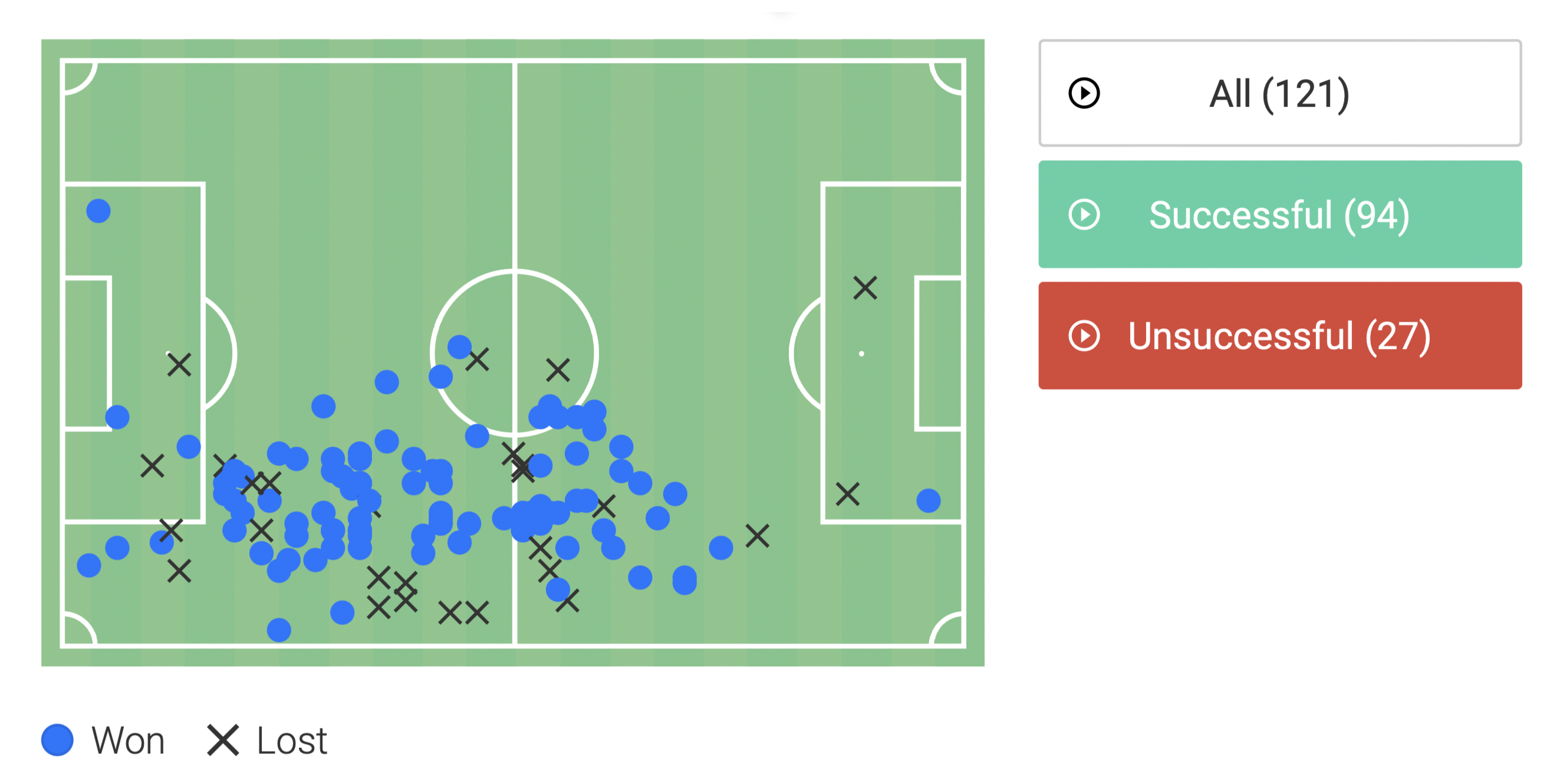 The above viz shows the defensive territory of the player. It indicates that the player is involved in a lot of defensive action in the defensive and middle thirds of the field. Ramos makes 3.9 interceptions per 90 with a win rate of 68.8% in defensive duels. Additionally, he has a win rate of 58.2% for aerial duels won. Ramos gives up 1.05 fouls per 90, and most of his action takes place on the right flank as the PSG full-backs push forward.

He made 121 total actions on the pitch in their one-nil-away defeat to Reims last match. Out of these, 94 actions were successful, which included 11 defensive and three aerial duels. He was one of the players involved in the defensive lapse that took place in the build-up to the Reims’ goal scored by their skipper Hamari Traore playing in left-back. The same can be seen in the viz, as Traore caused lots of problems in that game against PSG and Ramos was for the most part unsuccessful against Hamari.

Recoveries up the pitch 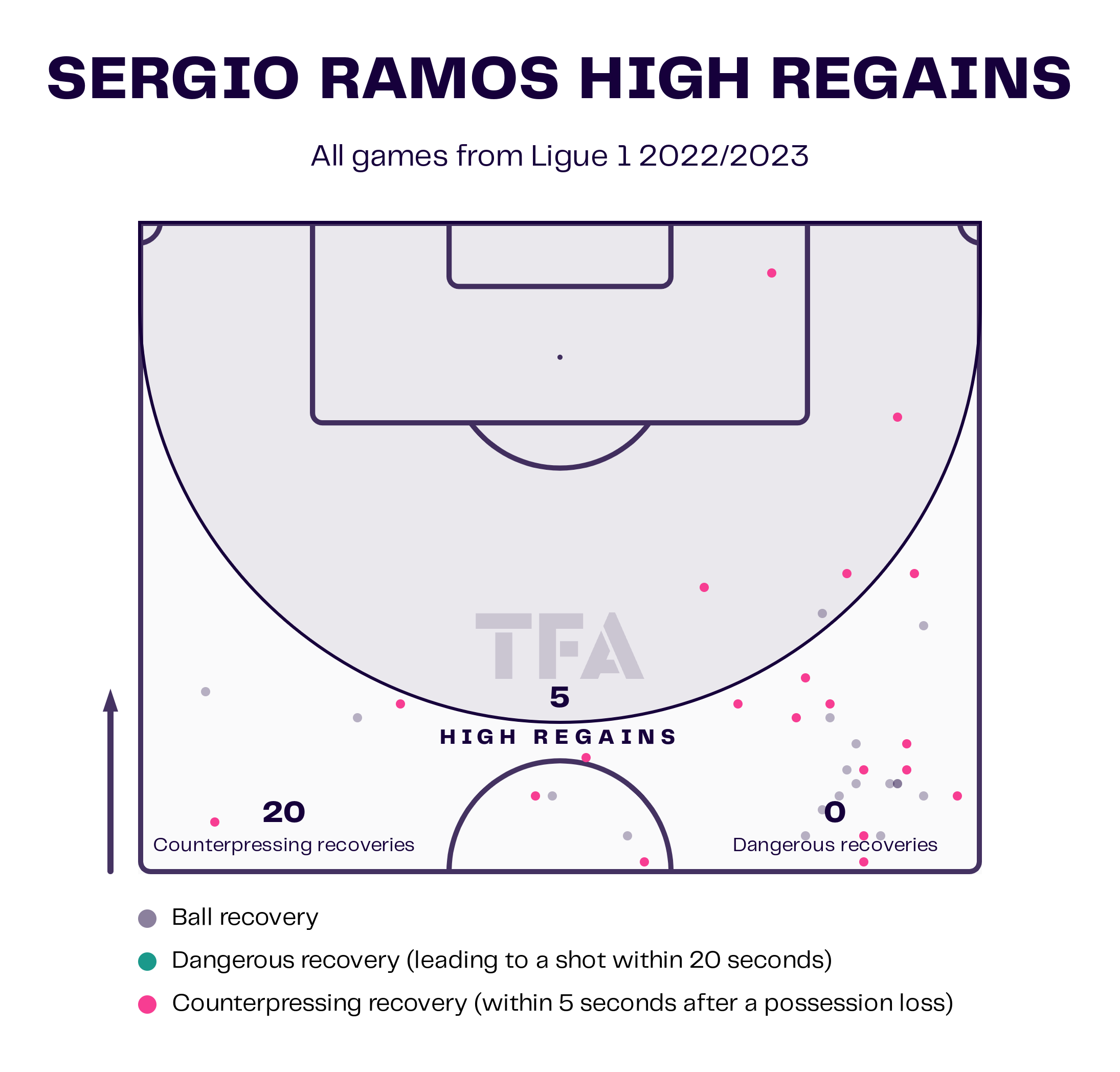 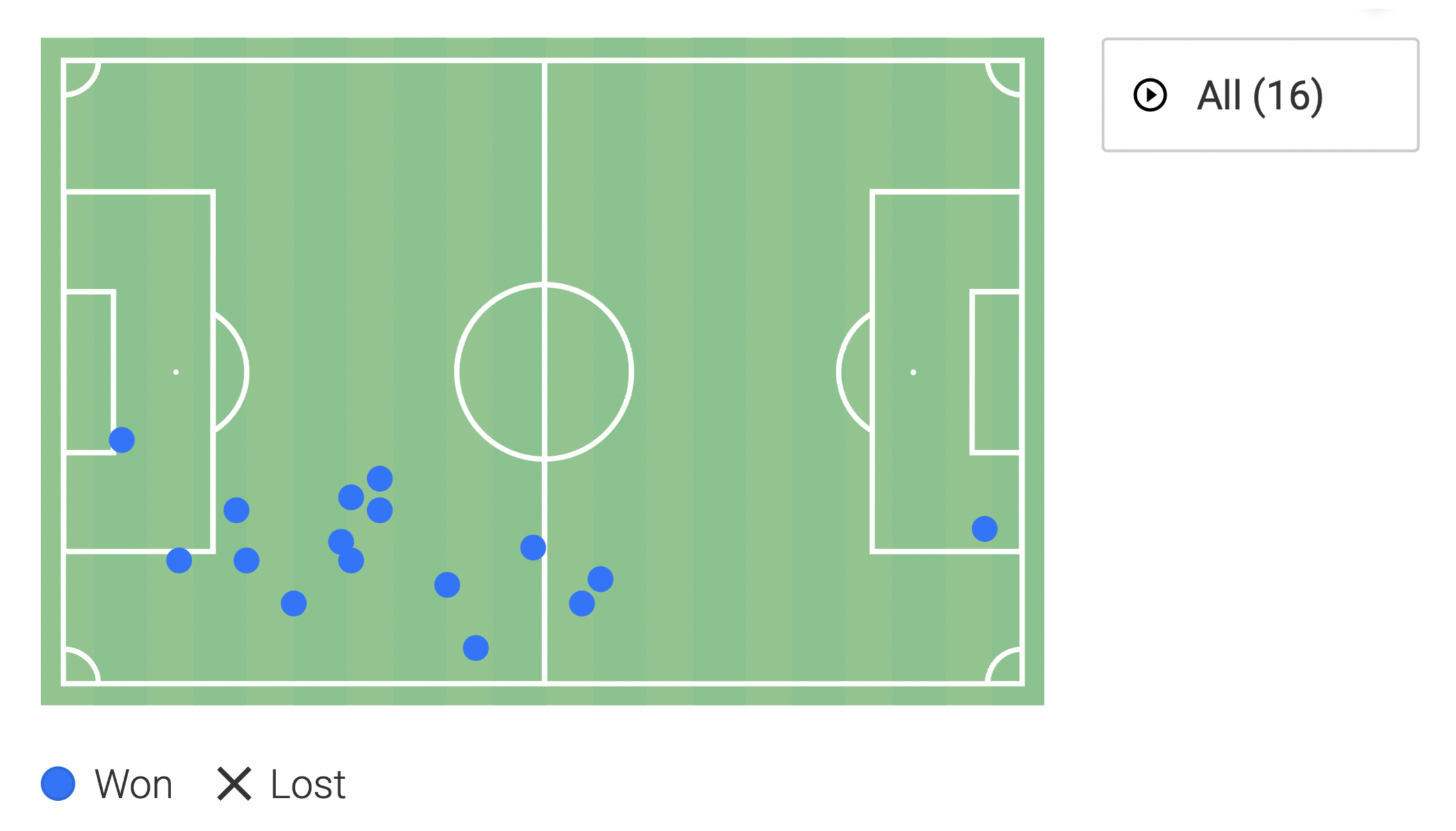 Overall, Sergio Ramos has enjoyed his second season playing in France, especially after overcoming his setbacks due to injuries. He has helped the team keep eight clean sheets and has faced two losses in the league. Sergio Ramos has not scored any goals so far in the Ligue 1 2022-2023 season, and it is yet to be seen if he provides some goals, although he most recently scored a striker’s goal in a friendly against Riyadh All-Stars. Sergio Ramos will look to add more trophies to his cabinet with PSG this season as PSG fight for Ligue 1 as well as look to win the Champions League.

Under the microscope: Why Reims are looking stagnant in the second...

Under the microscope: How Jonathan Clauss has impressed since joining Marseille...