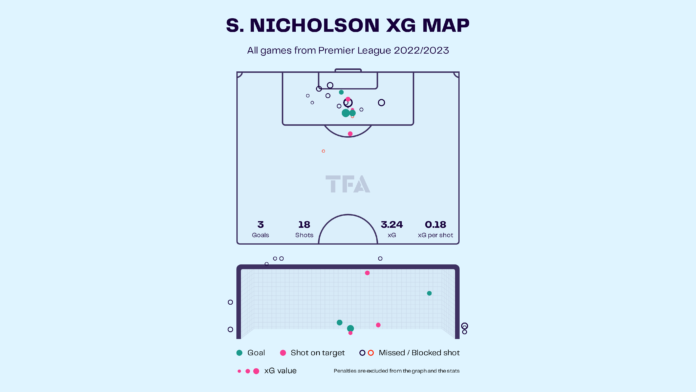 A forward for both the Jamaican national team and Spartak Moscow in the Russian Premier League, Shamar Amaro Nicholson is a professional footballer from Jamaica. Numerous European teams are showing interest in him, one of which is FC Nantes of Ligue 1. The Jamaican international has played 13 times this year for the Russian team. Shamar has 30 total appearances and 10 goals for his country. He is now in good shape and dependable in terms of attack, making him a candidate to consider for many teams. Any cross into the box should be directed at Nicholson because of his strength in the air. Below are some stats that show why Shamar is a lethal attacking option for his team. 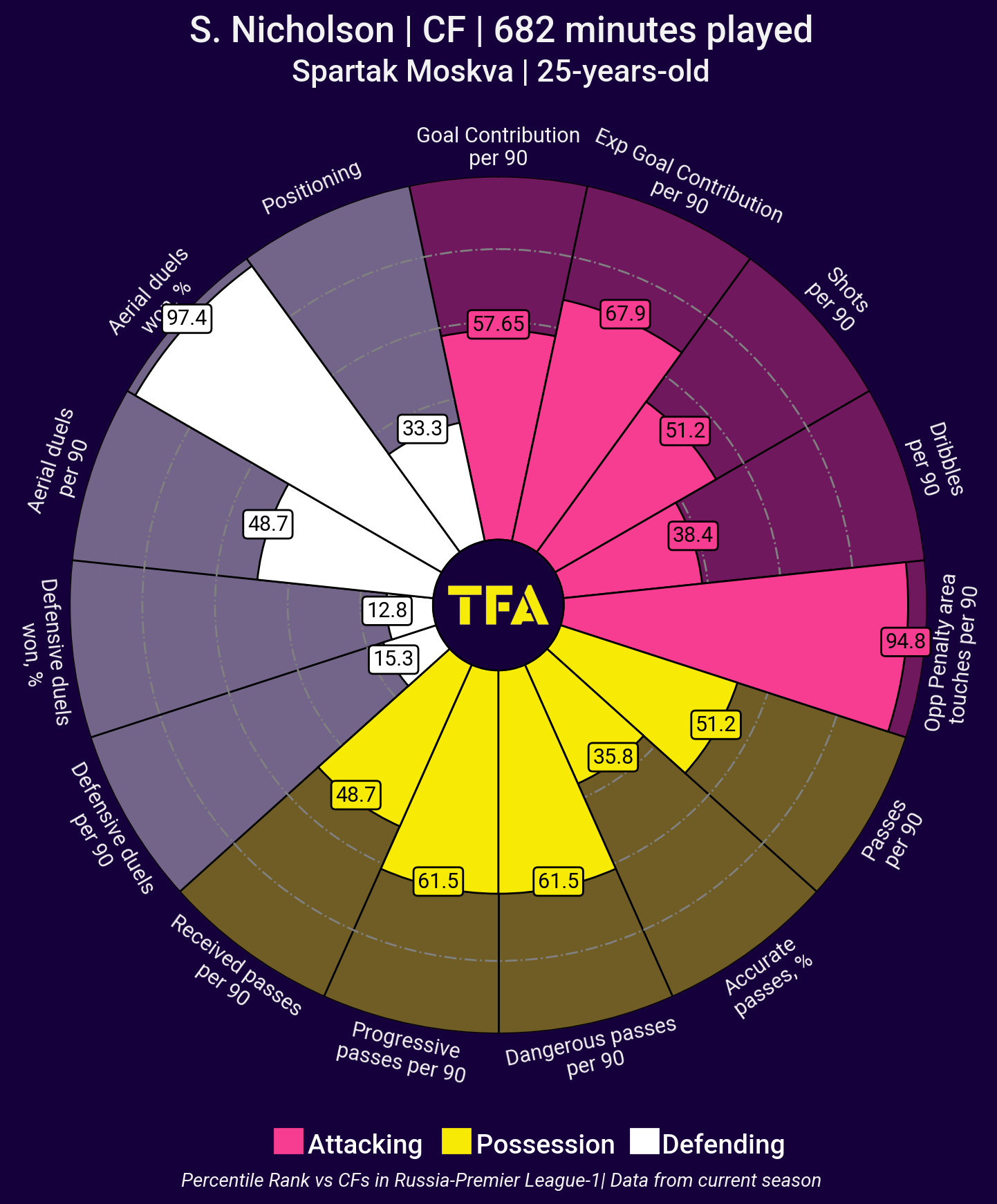 The above viz shows the percentile rank in comparison to the other centre forward in the Russian first division. Shamar Nicholson’s attacking stats have been crucial for Spartak in terms of threatening the opposition’s defence. He is the best in the league when it comes to winning aerial duels and taking touches in the opposition’s penalty area. Winning aerial duels means he is good in the air and can convert crosses into headers. 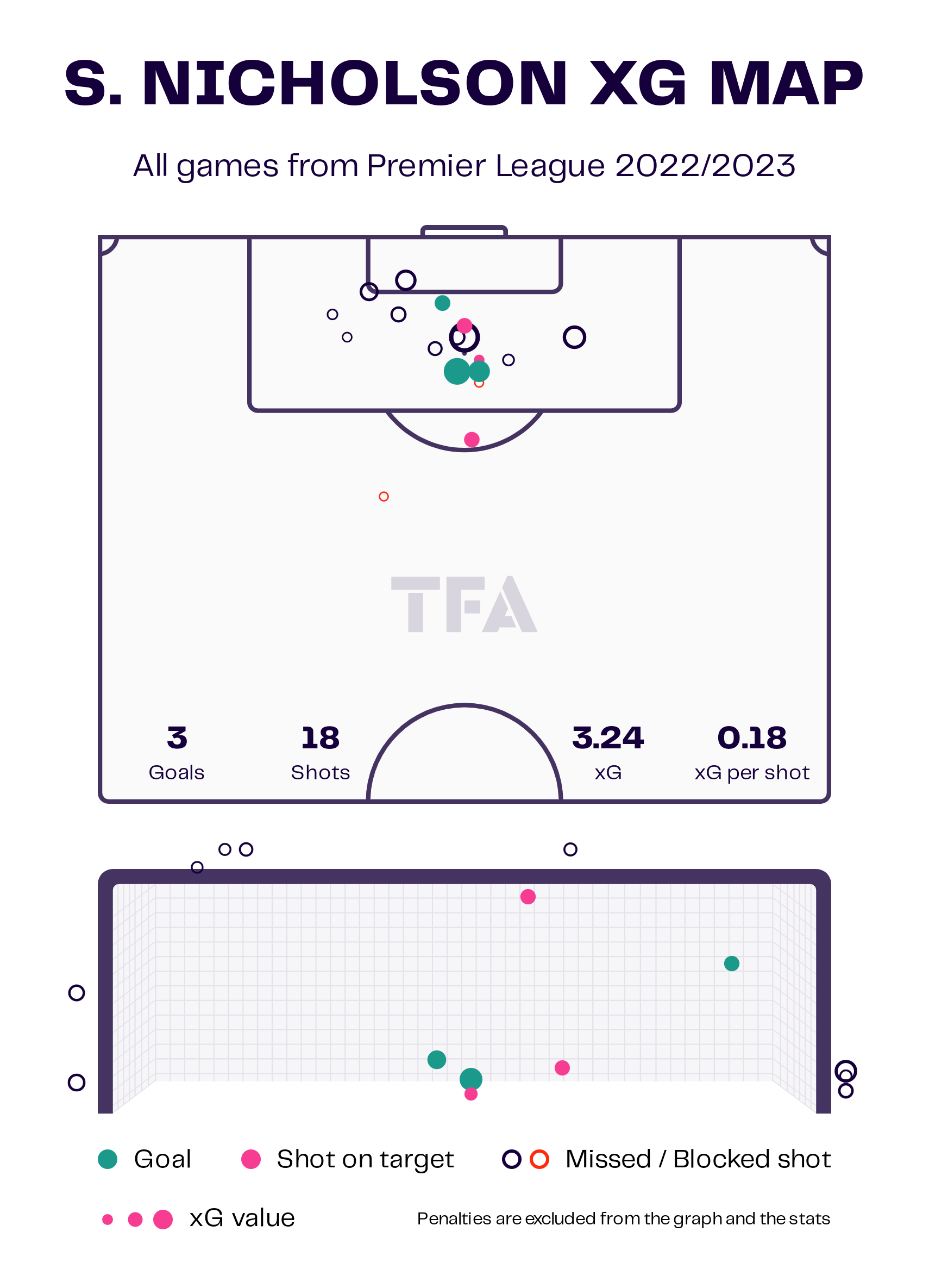 In the Russian Premier League 2022/23, Shamar Nicholson has played 13 matches. They have ten shots on target from a total of 18 shots and have scored three goals (3.24 xG). All of his goals have come from inside the box. Most of the shot attempts have been made from around the penalty spot. Many of his missed and blocked shots are also attempted from inside the box. This shows that Shamar maintains his position in the box as much as possible. 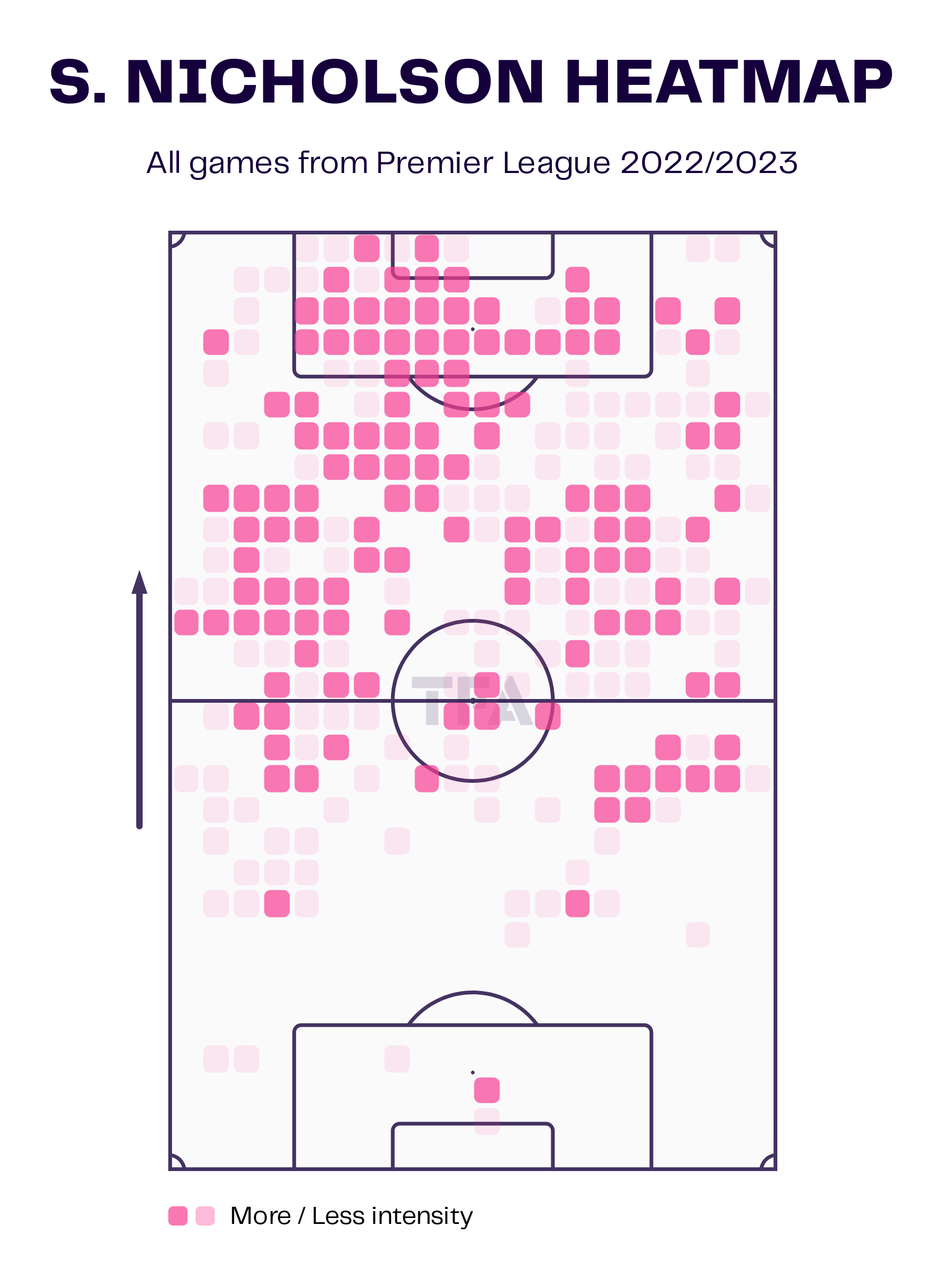 The above viz depicts Shamar Nicholson’s heatmap for the 2022–23 Russian First Division. It can be observed that Shamar covers most of the final third. Additionally, he displays a lot of intensity in the final third inside the opponent’s box. He performs most of his attacking duties for Spartak in that area. This again shows the attacking threat Shamar provides for his team by constantly making his presence felt in the box.

Lethal in the air 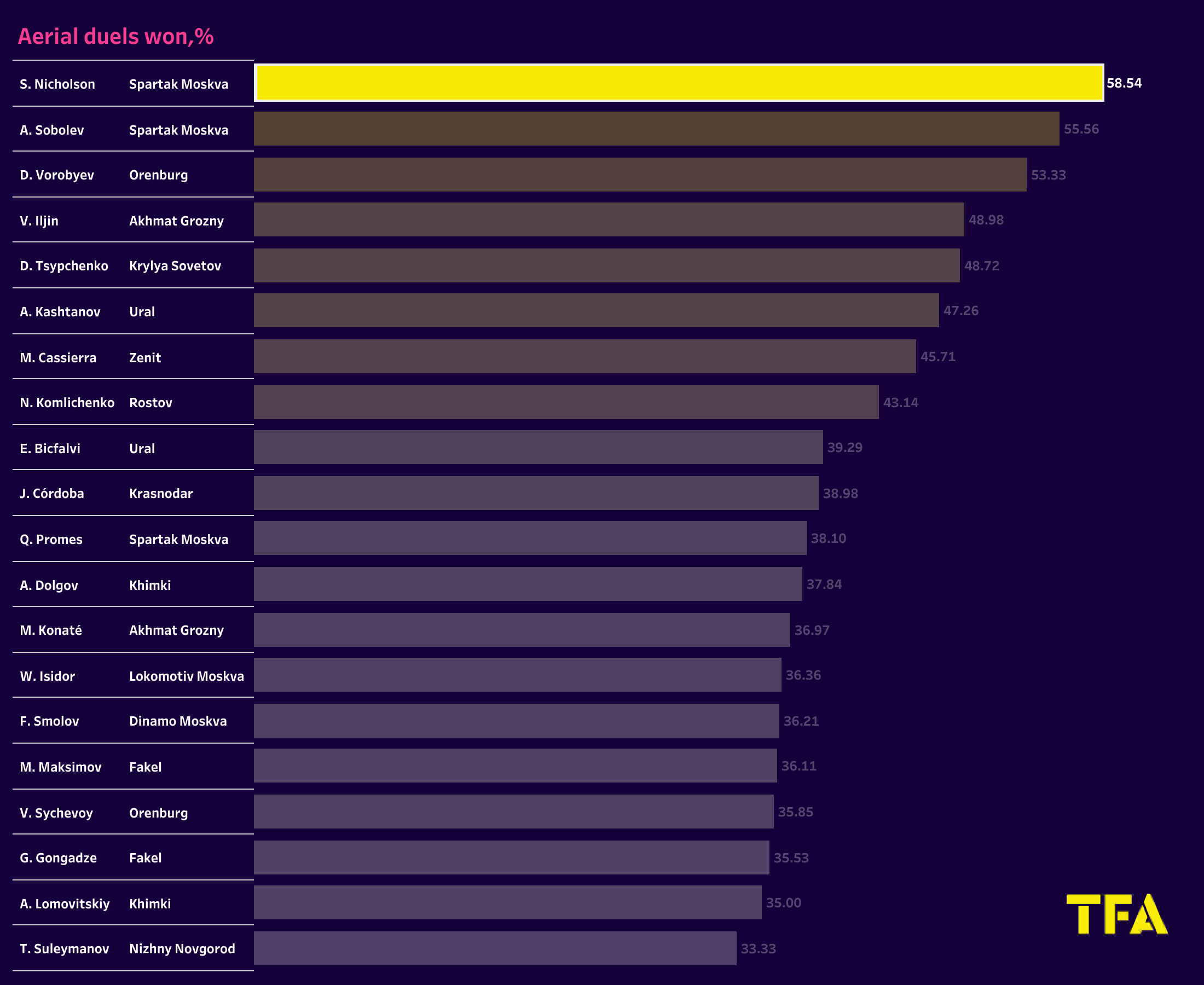 The above viz is a collection of stats showing Shamar Nicholson’s percentage of won aerial duels. The Jamaican is in the best of books, with 58.54 per cent of defensive duels won in the 2022–23 Russian League season. This is an indication of nature’s ability to compete in aerial duels and win. He manages to do so most of the time. Being a centre forward, this comes in handy. Nicholson ensures that no cross coming in is wasted and manages to make an attempt at goal as often as possible. 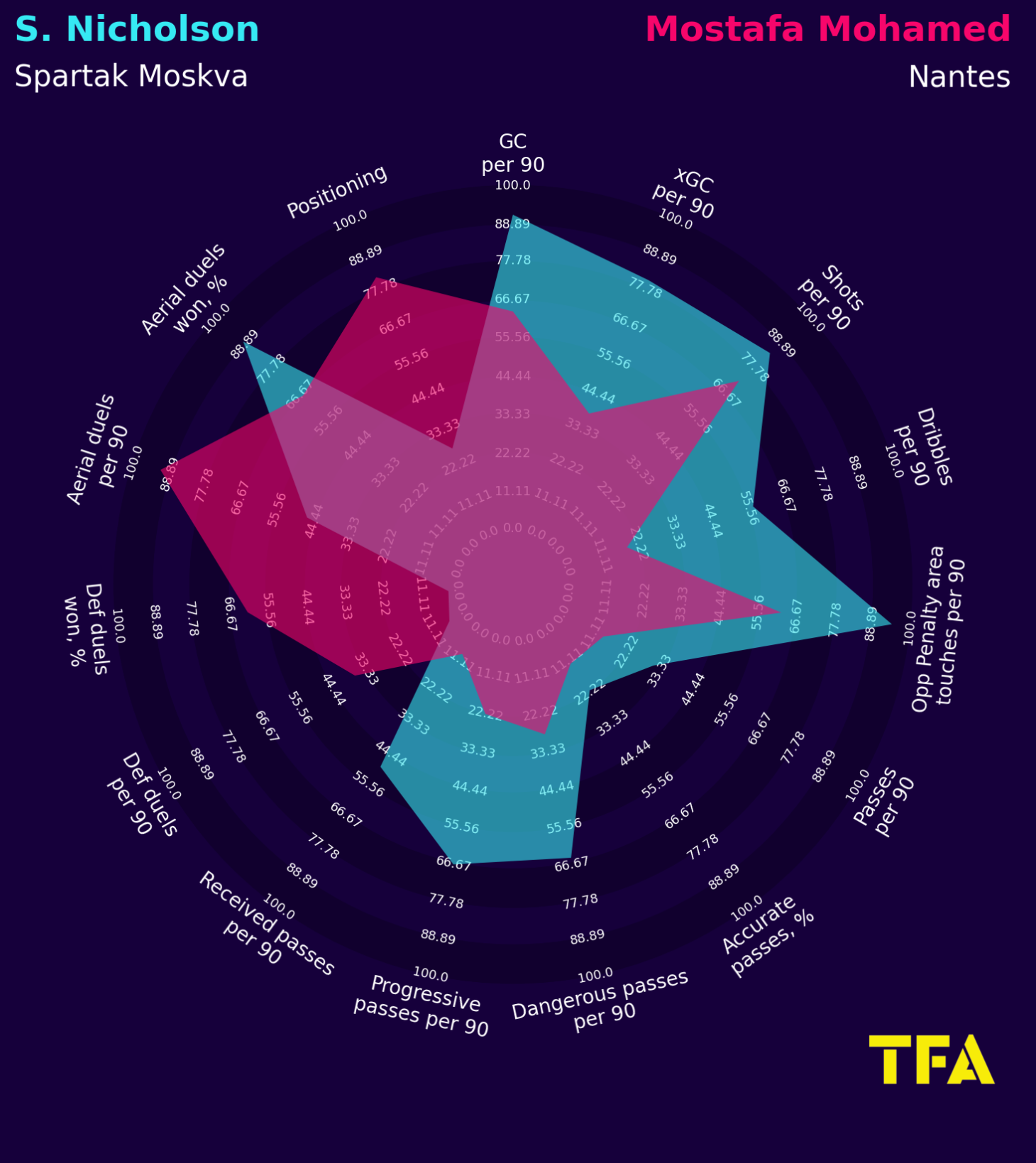 The above viz is a comparison between Shamar Nicholson and Mostafa Mohamed of Nantes. In the French Ligue 1 season 2022/23, Mostafa Mohamed has played eight matches (plus seven as a sub). They have seven shots on target from a total of 16 and have scored four goals (2.42 xG). Mostafa Mohamed averages ten passes per match with a pass completion rate of 64% and has two assists. It can be observed from the above viz that Shamar has better stats in terms of xG per 90 and dribbles per 90. There is also quite a difference in terms of goal contributions and shots per 90. Shamar is ahead in terms of Ariel duels won per 90. Both players have similar numbers in terms of defensive duels per 90. Shamar Nicholson is also ahead of Mostafa when it comes to passing and touches in the opposition’s penalty area.

Shamar Nicholson has great on-field skills and overall metrics, so Nantes will undoubtedly want to hire him. He exhibits great quality in the box, and this will only get better over time. His attacking threat in the air can be a plus in the French League, especially for a club like Nantes. It will be fascinating to see if Nantes makes a move to hire Shamar Nicholson any time soon. He is a valuable asset and a wise investment for any team.