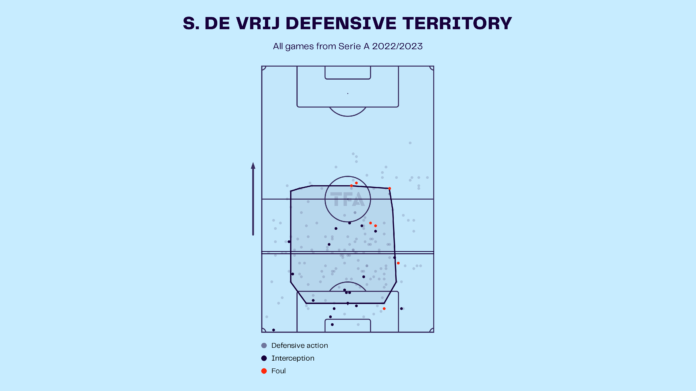 Stefan de Vrij is a Dutch professional footballer who plays as a centre-back for Serie A club Inter Milan and the Netherlands national team. In the Italian Serie A 2022/23, Stefan de Vrij has played 12 matches, and in the UEFA Champions League 2022/23, Stefan de Vrij has played three matches, plus one as a sub. Marseille are preparing for the highly regarded centre-back’s transfer. After a humiliating exit from the UEFA Champions League, Marseille are looking to compete for the Ligue 1 championship while trailing league leaders Paris Saint-Germain by 11 points. As a result, they are searching for a top-tier defender. They have conceded 14 goals in Ligue 1 and finished last in their UEFA Champions League group, having conceded eight goals.

Stefan De Vrij is known to be a tough tackler and combative defender who’ll take one on the face and carry on playing. He’s equally good with his ball on his feet and off it. Marseille will be interested in securing his services in defence. Below are some stats depicting Stefan De Vrij’s performances this season. 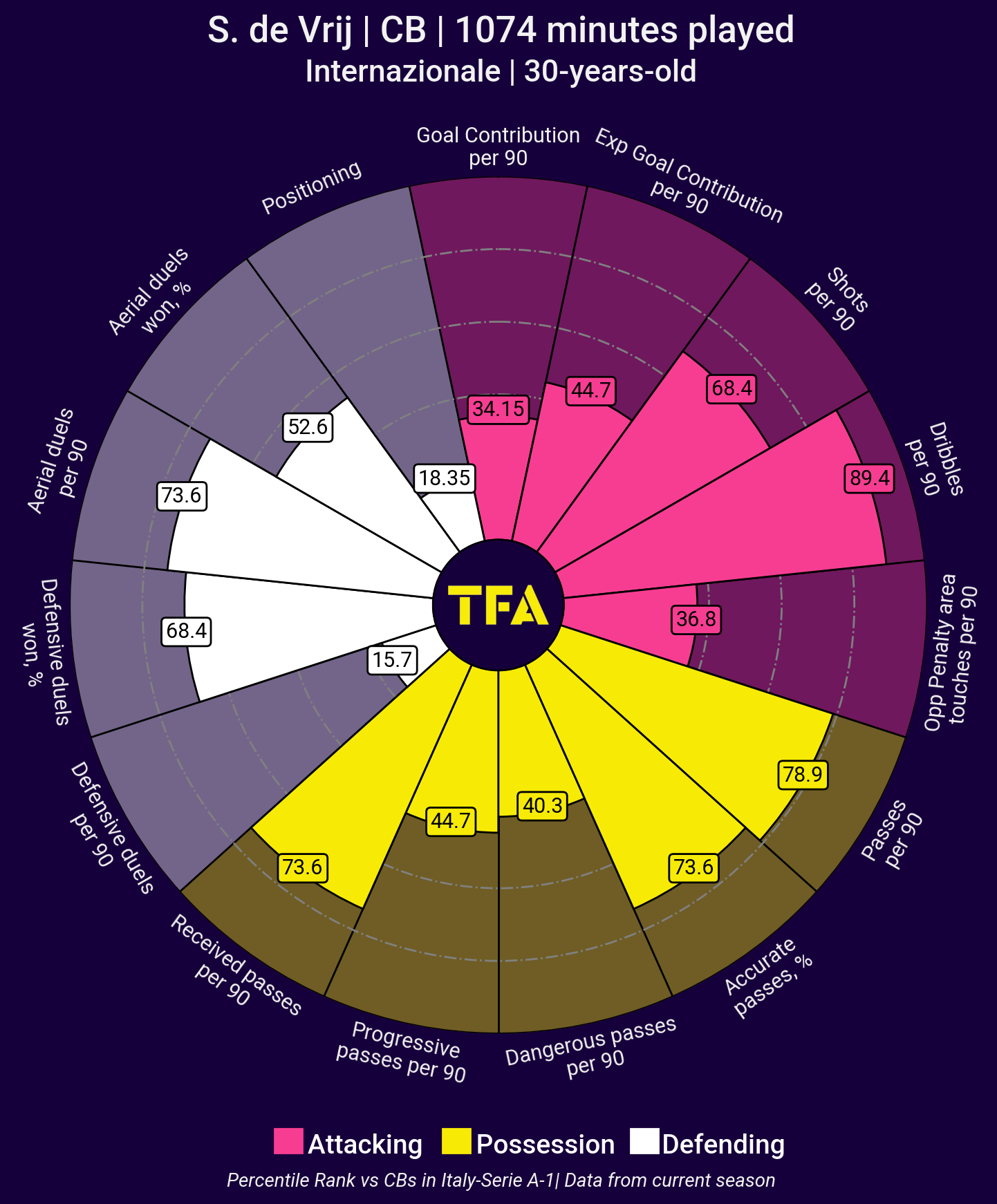 The above viz shows the percentile rank in comparison to the other centre-backs in Serie A. De Vrij’s offensive capabilities have been significant for Inter Milan. He is ranked highly for dribbles and shots per 90 minutes. He is ranked high for accurate passes and passes per 90, and this has been a crucial advantage for the player and his team. Defensively, he has fair numbers compared to other centre-backs in Serie A. He ranks fairly in terms of aerial and defensive duels won. 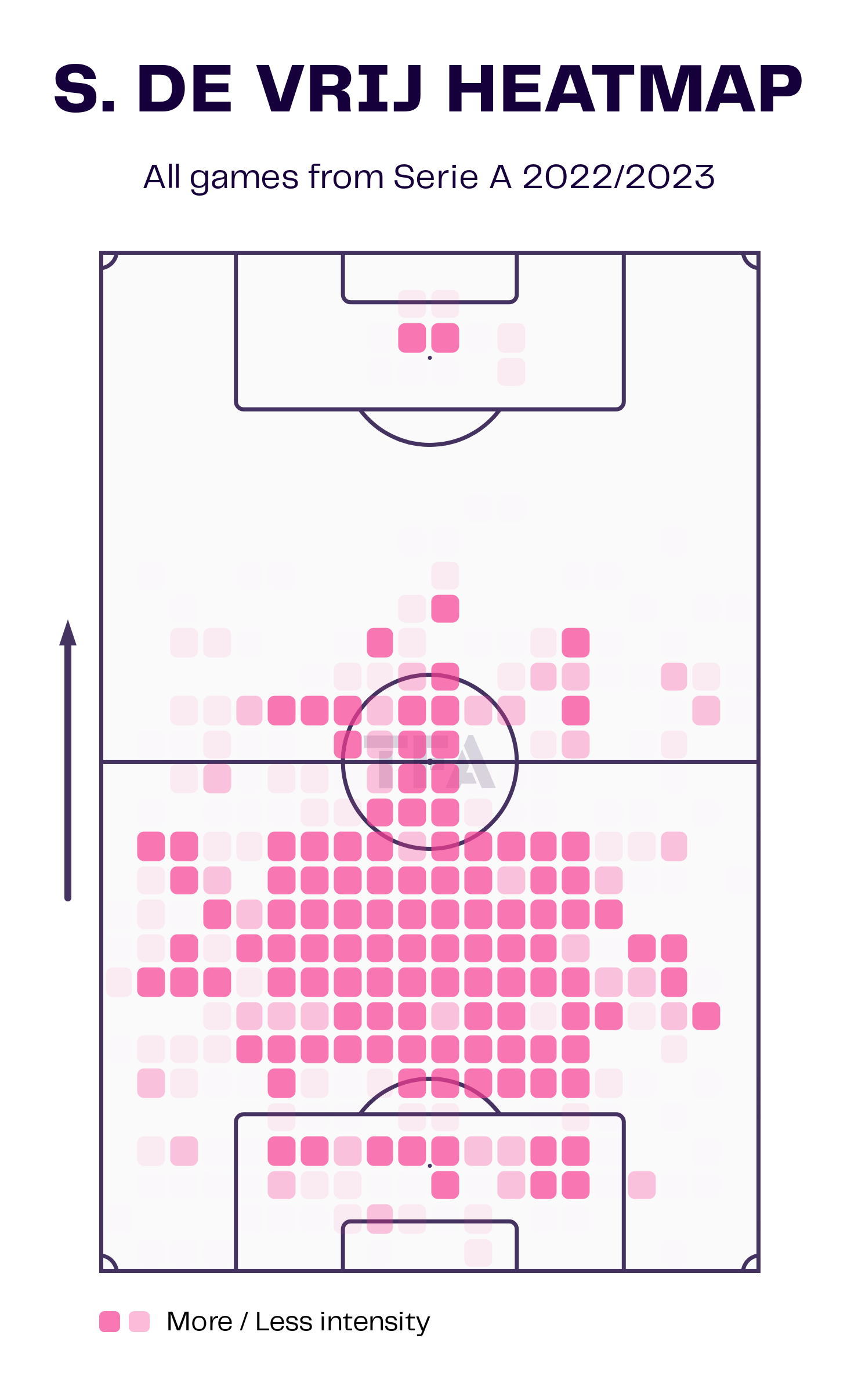 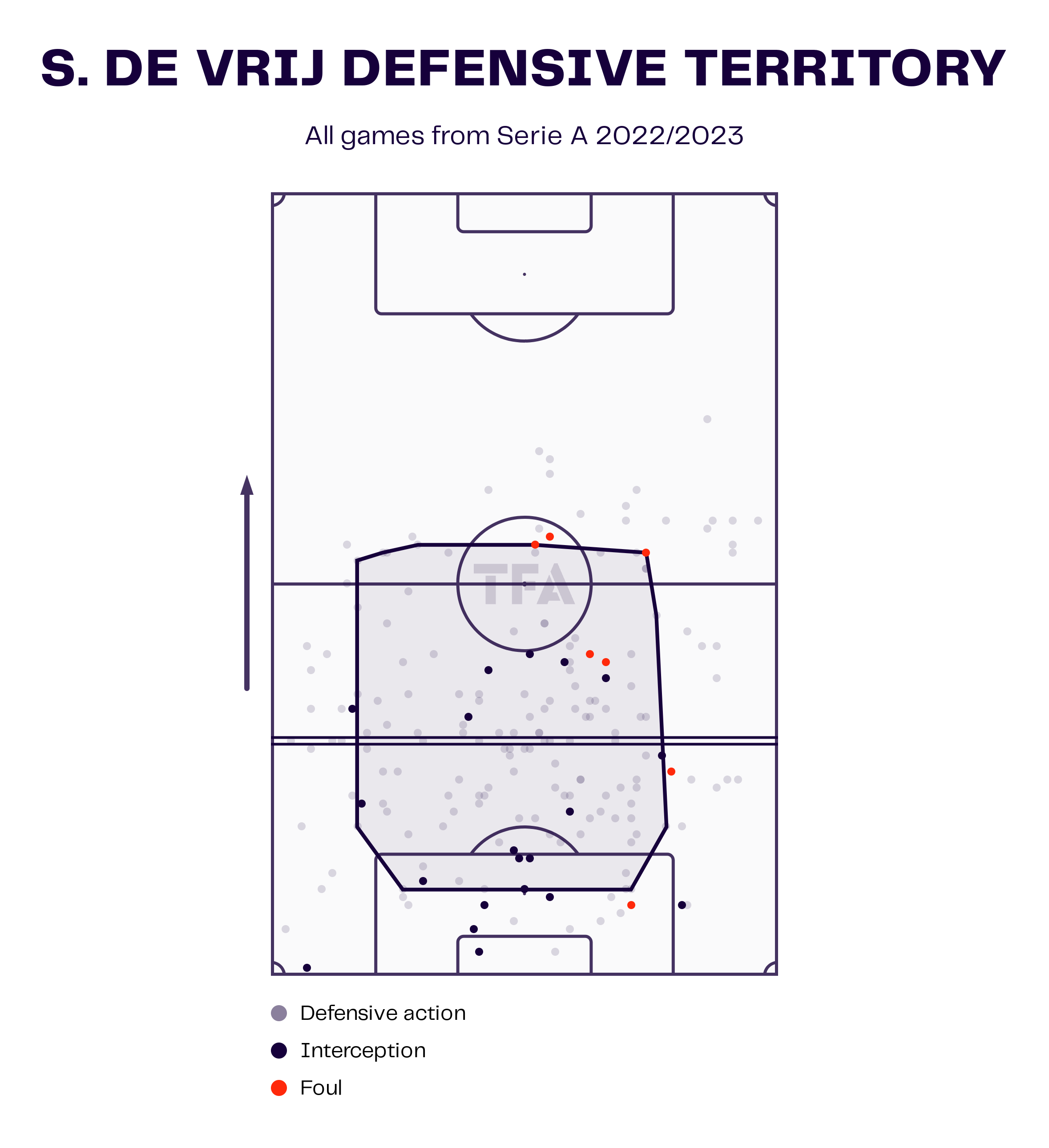 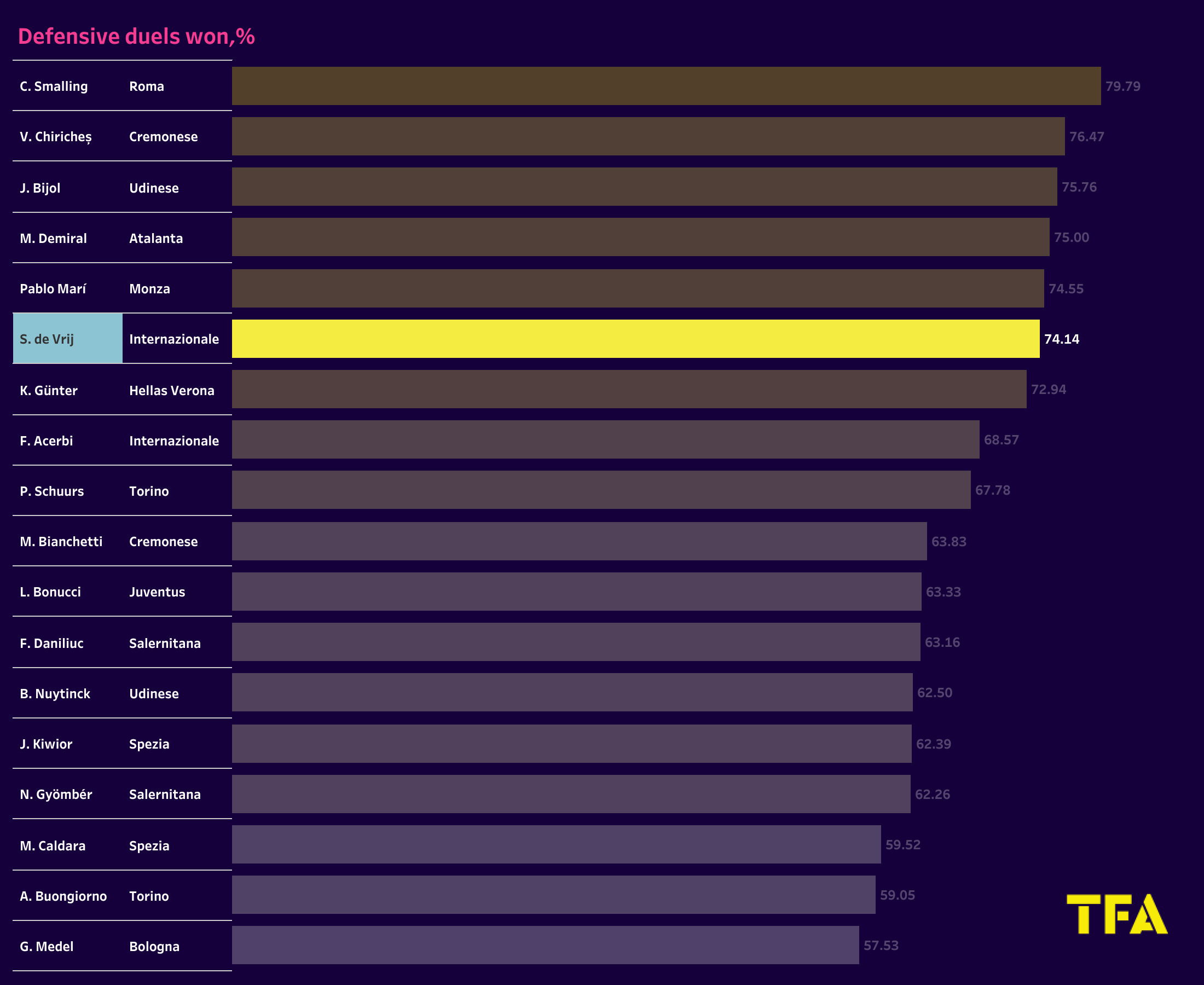 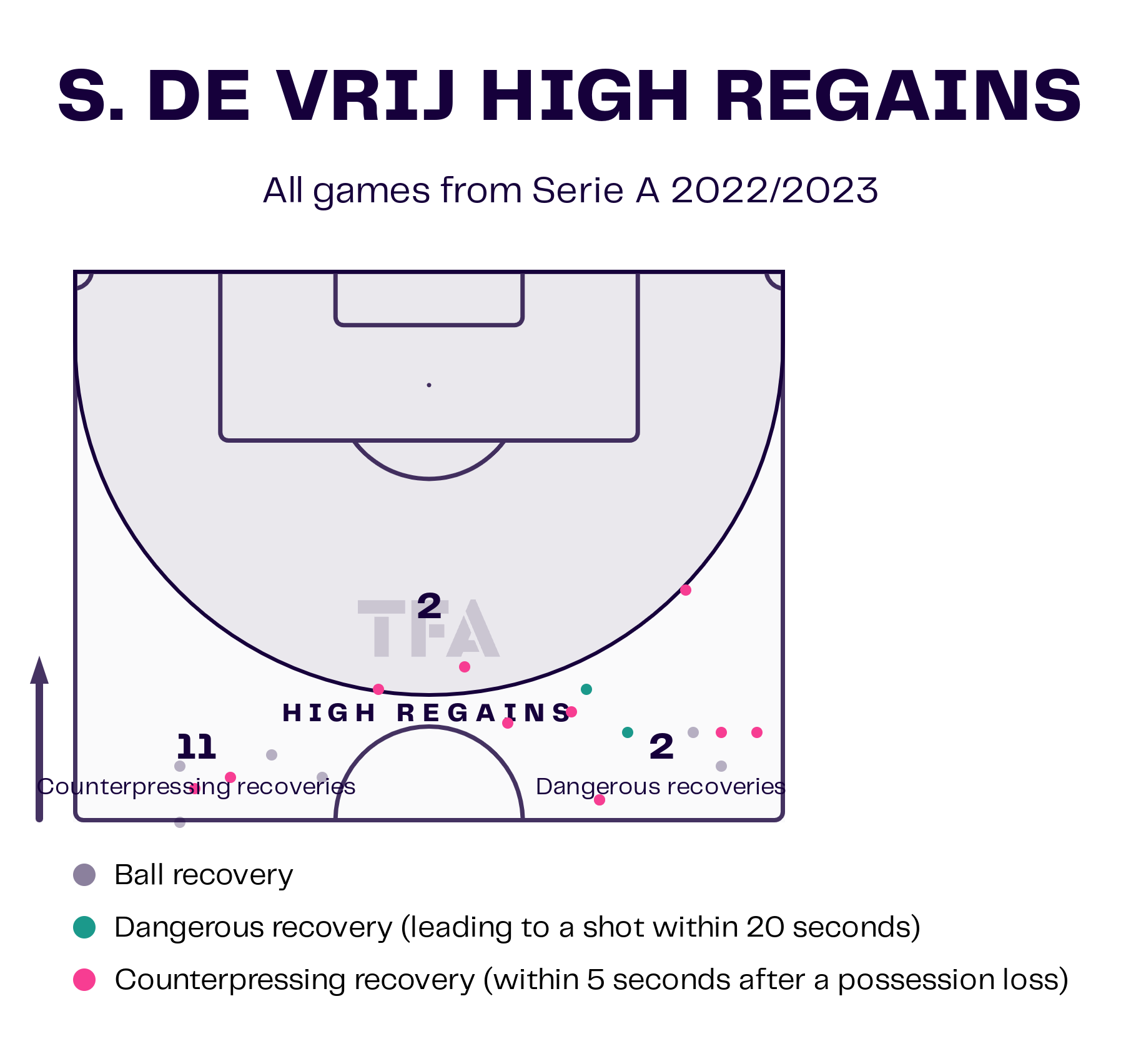 Stefan De Vrij makes occasional movements in the opposition’s half in order to put high pressure on the opposition’s midfield and final third. The above viz represents various high regains made by De Vrij for Inter Milan in the 2022–23 Serie A season. It can be seen that he has made two high regains, 11 counter-pressing recoveries, and two dangerous recoveries. Additionally, the player attempts 0.42 shots per 90, with a shot accuracy of 40% for attempted shots. Overall, he is a player with a good ability to press forward as well as halt the opposition from transitioning into an attack. 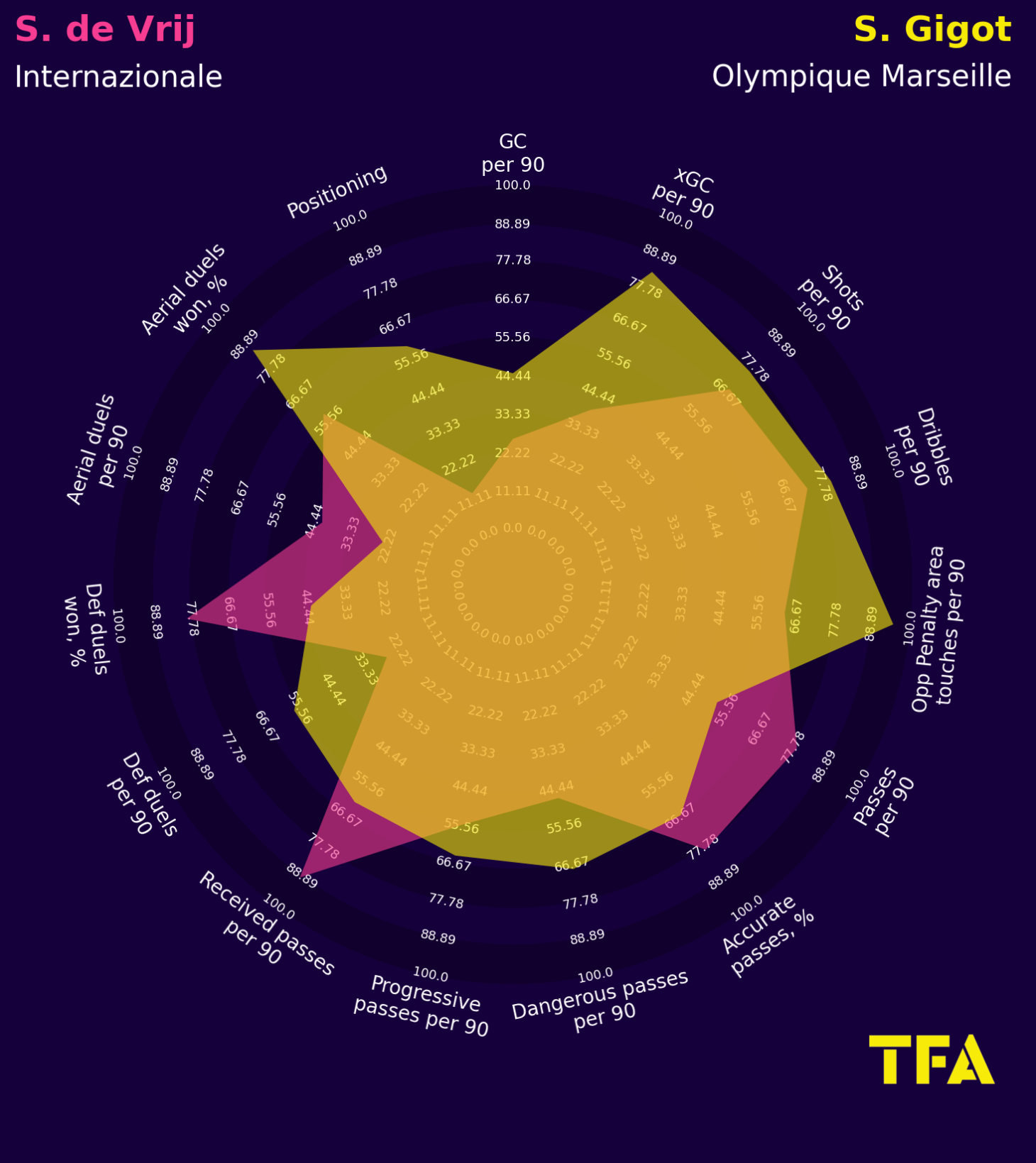 The above viz is a comparison between Stefan De Vrij and Samuel Gigot for the matches played for their teams, Inter Milan and Marseille, respectively. De Vrij has done well in defence and has better numbers in terms of defensive duels won. Gigot, on the other hand, has fared far better in terms of winning aerial duels. Stefan has impressive passing abilities and has made more accurate passes. Both players are the same age, but De Vrij has made a total of 27 UCL appearances as compared to Samuel Gigot, who has made just five.

Overall, Stefan De Vrij is an experienced centre-back with plenty of defensive attributes who can lead the back line in matches. His European experience is something Marseille appears to lack, based on their most recent UCL outing. It will be interesting to see if De Vrij joins hands with the French side given that his experience will definitely be a strong addition to Marseille’s defence.

Under the microscope: How Jeremie Bela has fared on his return...