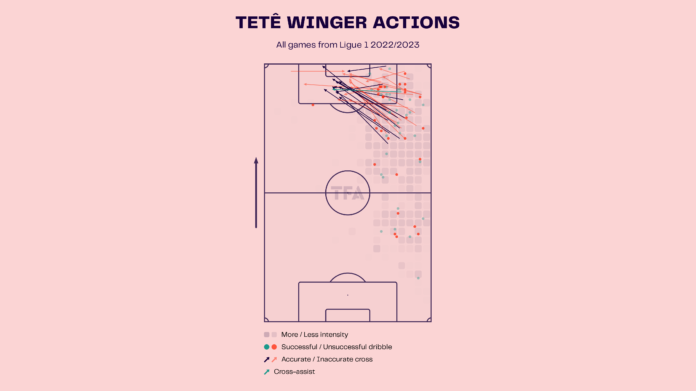 Mateus Cardoso Lemos Martins, commonly known as Tete, is a Brazilian professional footballer who plays as an attacking midfielder for Ligue 1 club Lyon, on loan from Ukrainian Premier League club Shakhtar Donetsk. He plays on the right wing for Lyon and has performed brilliantly at the age of 22 years. He has made 17 appearances for Lyon in the current season and helped the team secure a crucial attacking advantage on the field. Given his young age, Brazilian descent, and current form, Tete seems like nothing less than another extremely talented player from the country who is here to reach new heights. It remains to be seen whether he achieves high ranks in the national team, but for now, he is playing well in Lyon colours. Let’s now look at some of his stats from the current season.

Efficiency in front of goal 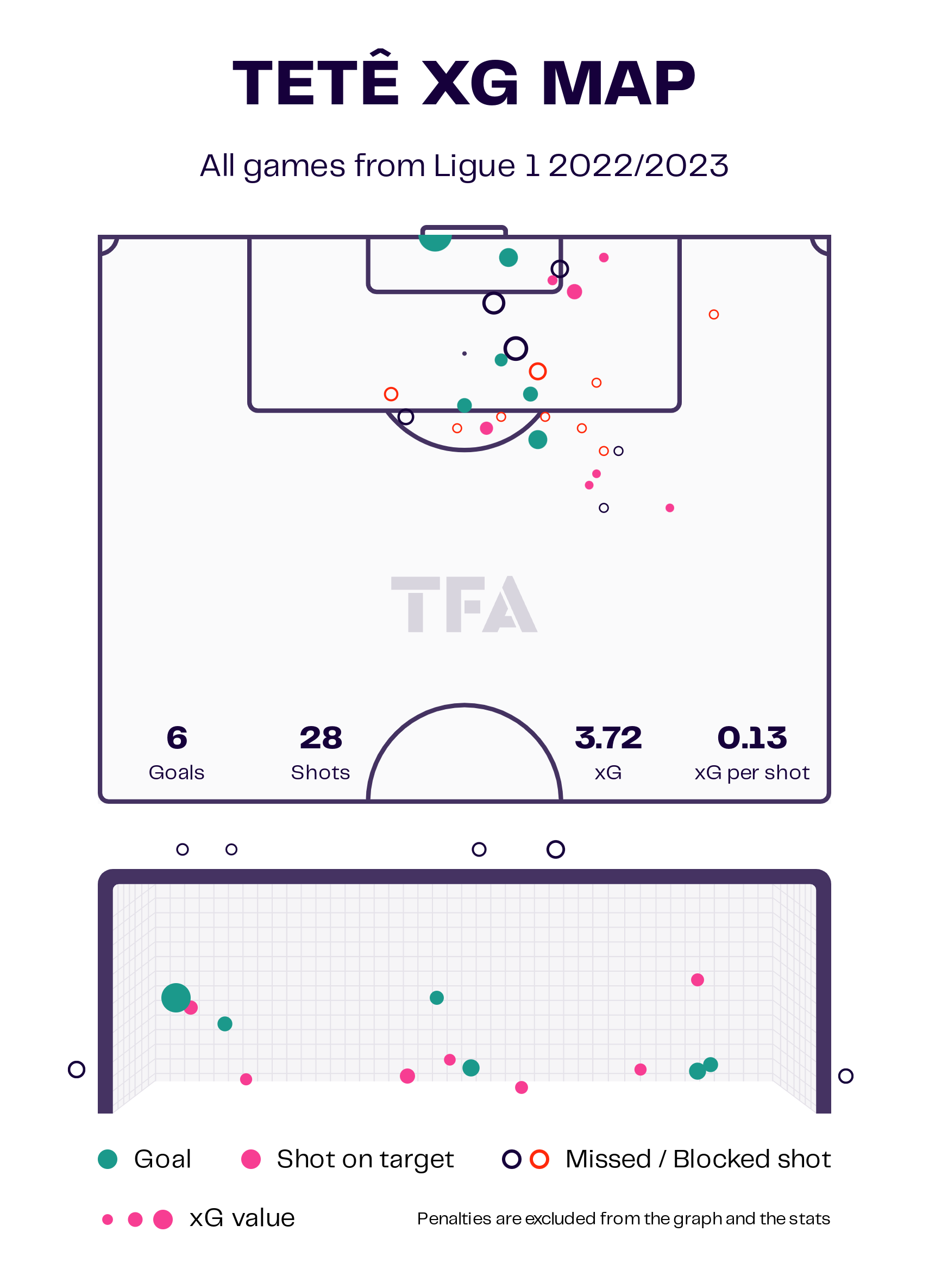 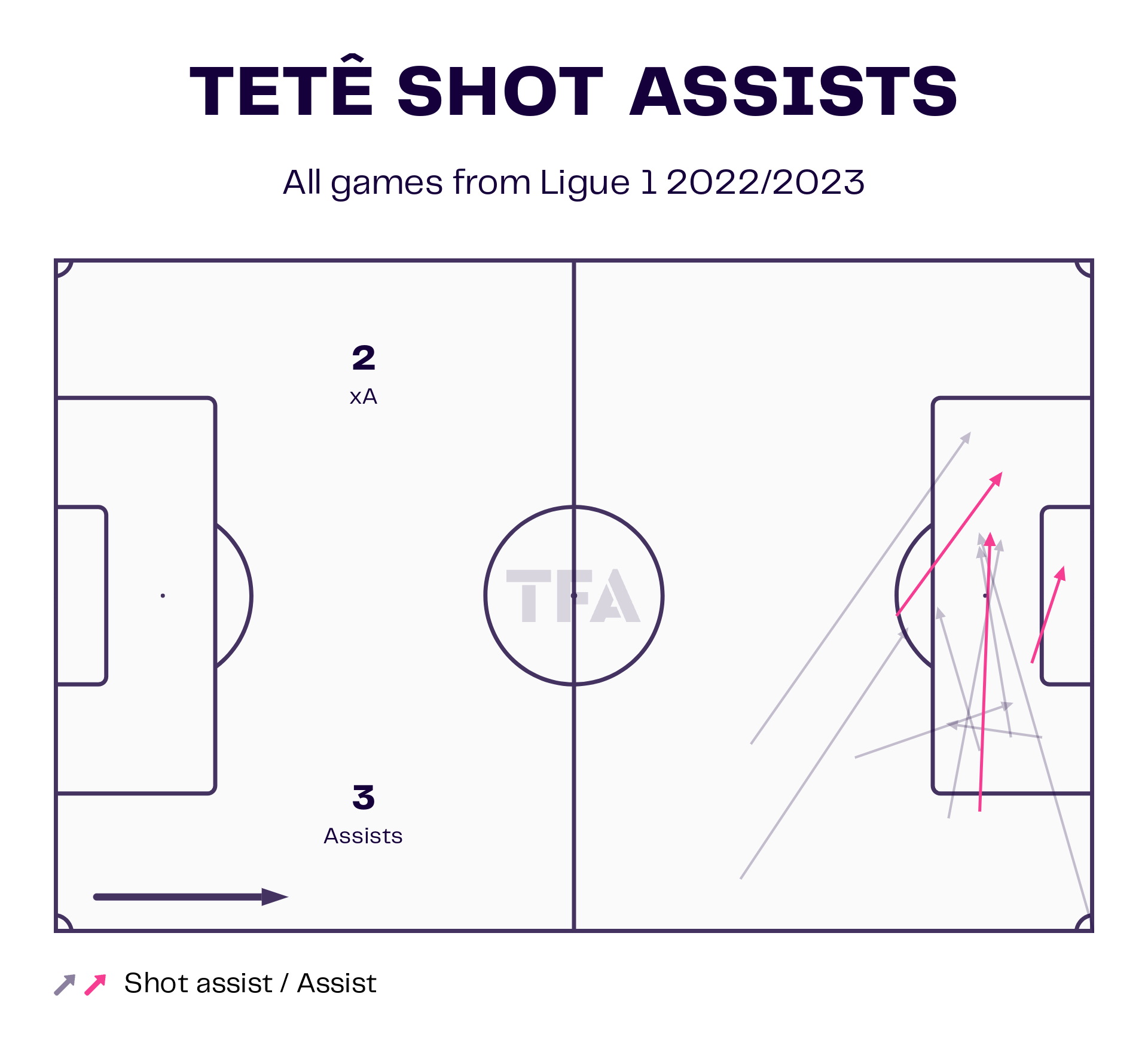 In the 2022–23 French Ligue 1 season, Tete played 14 matches (plus three as a sub). He has 13 shots on target from a total of 28 and has scored six goals (3.72 xG). The Brazilian averages 27 passes per match with a pass completion rate of 82% and has one three for Lyon this season. He likes to take shots from long range and has scored one goal from outside the box. Overall, he has made up for the rest with short-range efforts. He takes 2.18 shots per 90 minutes, with 46% shot accuracy. Tete in the current season has an xA of 2 for his three assists and averages 0.23 assists per 90. Most of his action came from the right side of the pitch, and he has provided assists from that region.

Brilliant on the wing 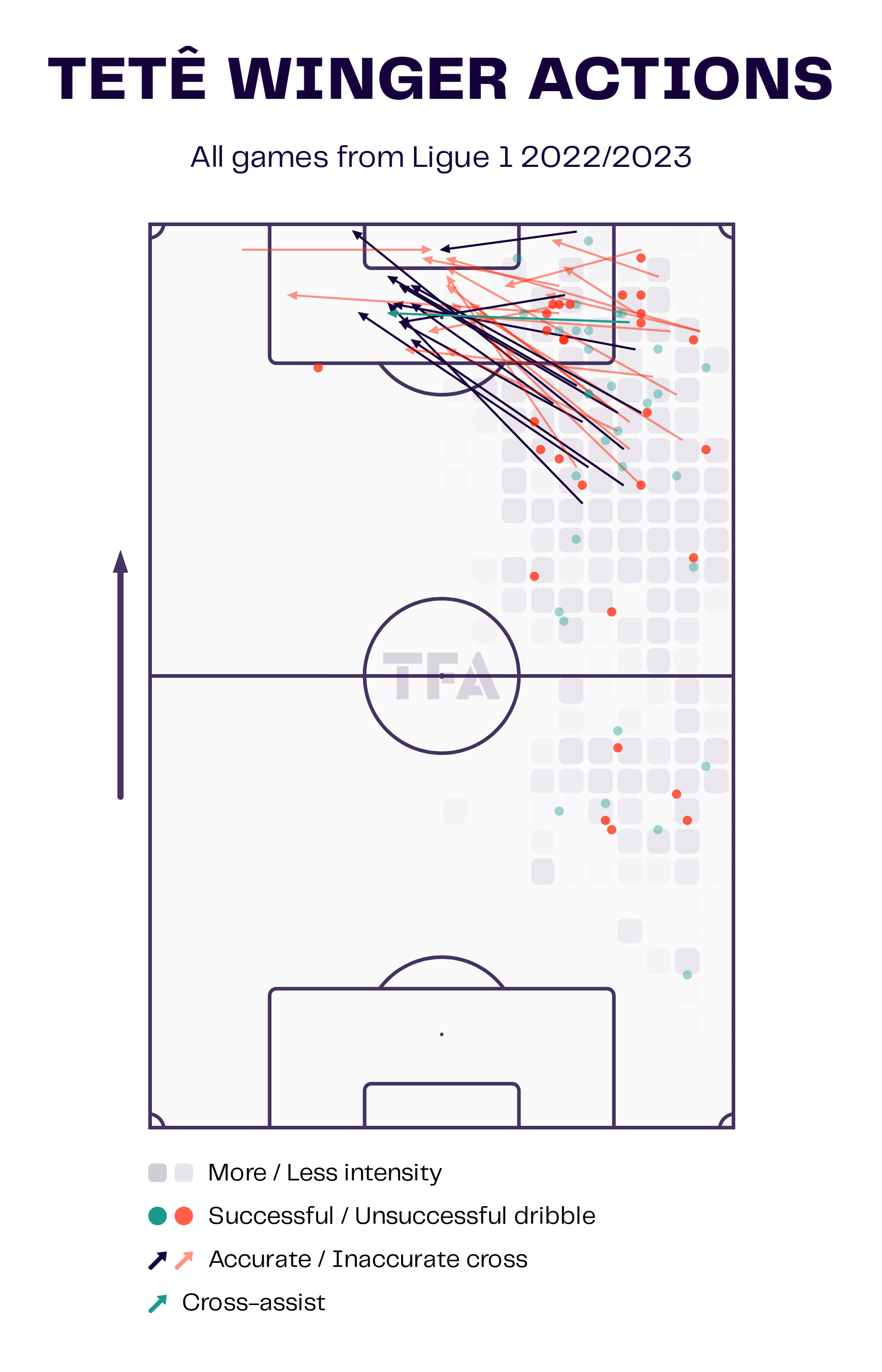 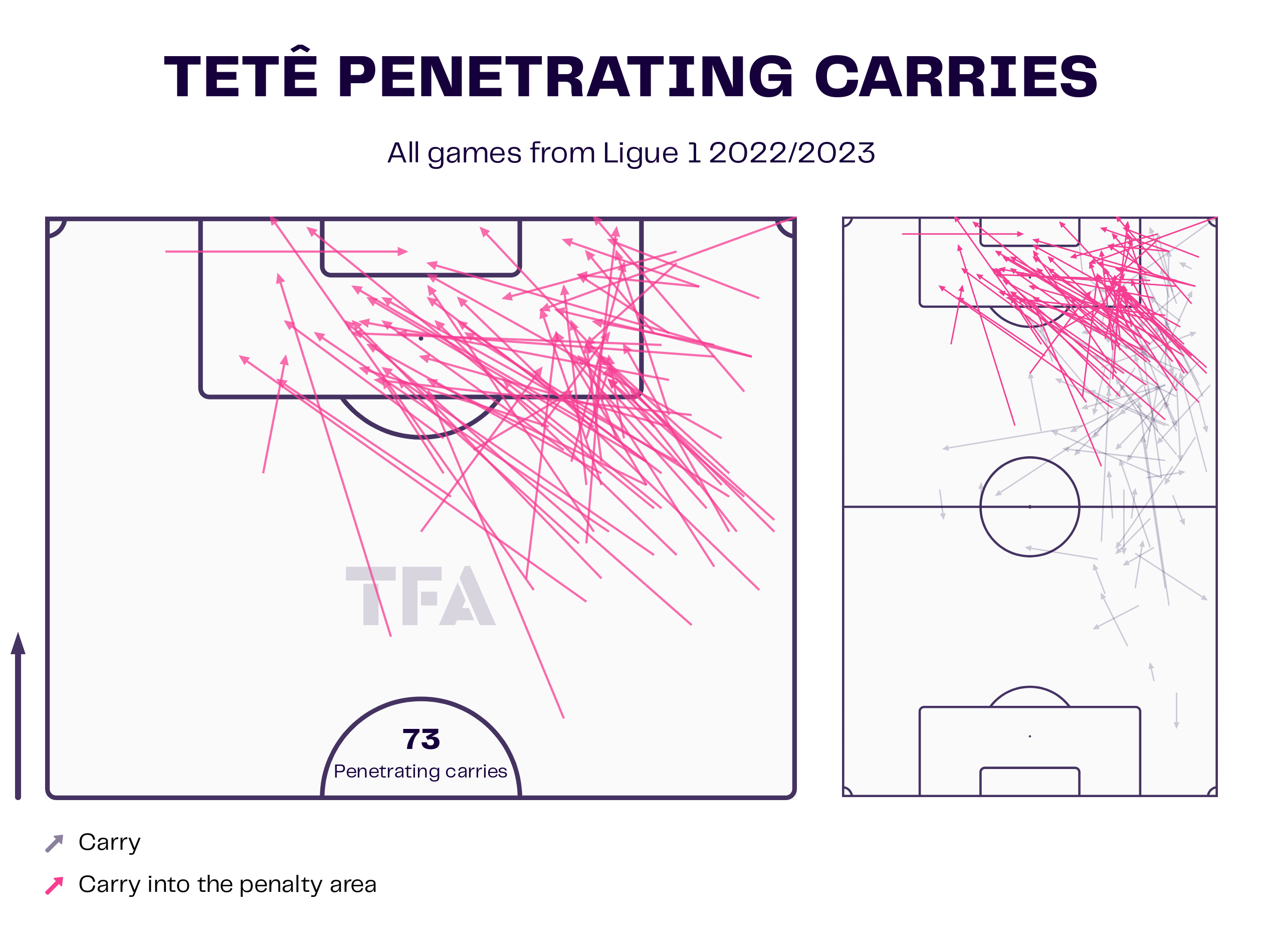 The above viz depicts the player’s winger actions during the 2022/23 Ligue 1 season. Tete attempts to dribble in the middle as well as in the final third. The number of successful dribbles is decent in his own half and goes on to increase in the final third. There are many attempts to cut inside from the flanks on the right wing. Additionally, he makes 2.96 crosses on average per 90 with a 34% success rate. In terms of dribbles, the man from Brazil completes 4.7 dribbles per 90 with a success rate of 50%. He has made a total of 73 penetrating carries into the penalty box. The player has an average of 3.27 touches in the penalty area per 90. 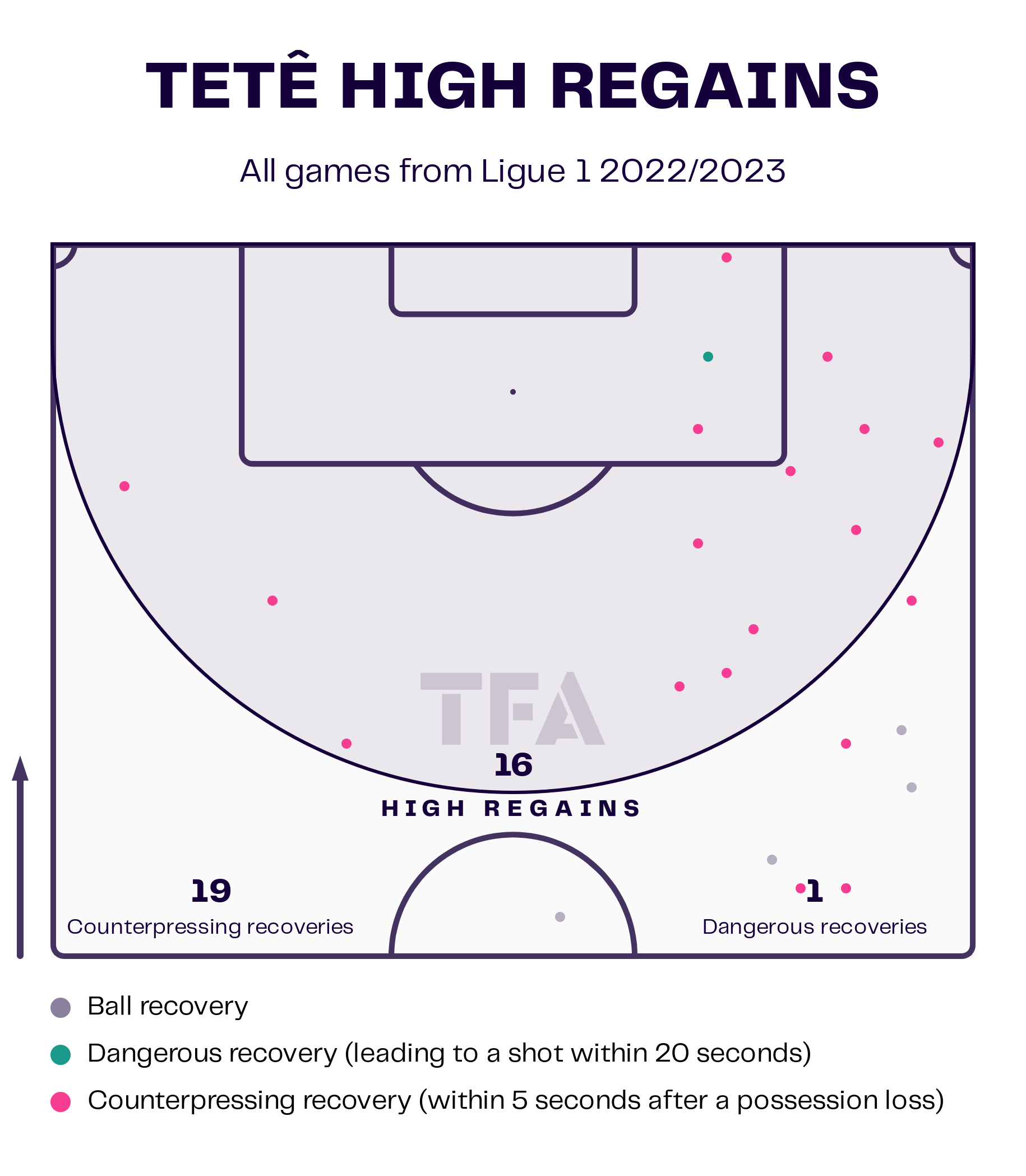 In terms of pressure up the pitch, he moves up and down the flank and has a good work rate. He has made interceptions in his own half as well as near the final third. He has 20.8 duels per 90, with a success rate of 51%. He makes 2.4 interceptions per 90 minutes, compared to 3.82 recoveries in the opposition half. As depicted above, Tete has made more than 15 recoveries and high regains this season, next to a dangerous recovery. Out of his 19 counter-pressing recoveries, 16 have taken place in the right wing. 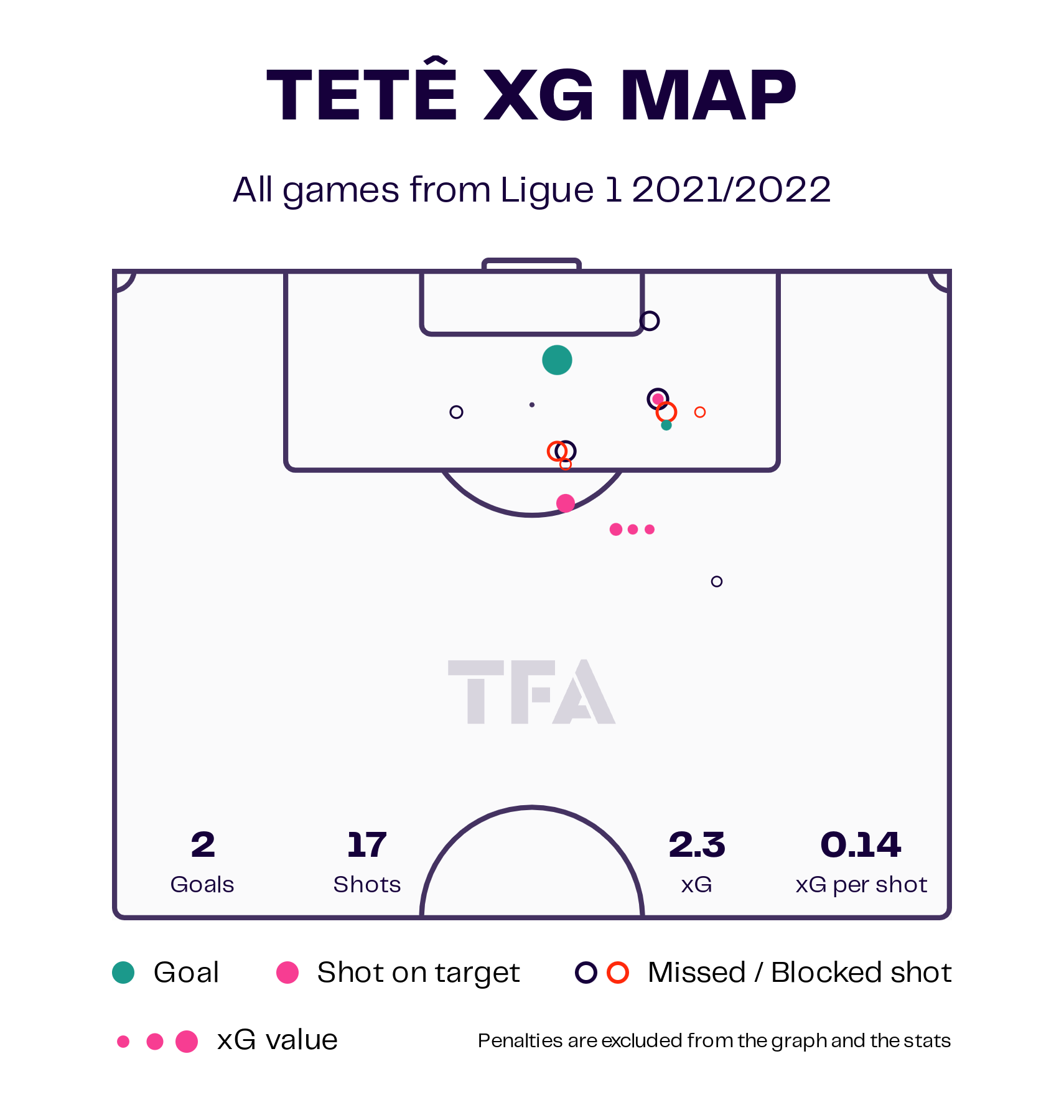 The above viz is an xG map for Tete from the 21/22 Ligue 1 season for Lyon. Overall, the Brazilian played nine matches for Lyon last season. He managed to score two goals from 17 shots. He finished with a positive xG of 2.3, averaging 0.14 xG per shot. He took 2.4 shots per 90, with 42% accuracy. He has already improved his performance in front of goal from last season and has been a crucial presence on the pitch for Lyon this season.

Overall, the Brazilian has had a good season for Lyon so far. He has the ability to generate an attacking threat from the wings and perform offensive and defensive duties from the flanks. He is also impressive in front of the goal and performs well in terms of creating an attacking threat on the pitch. He will look to rack up more goals and assists and help his team move up the ranks.

Under the microscope: Why Ben Yedder has been a prolific goalscorer...