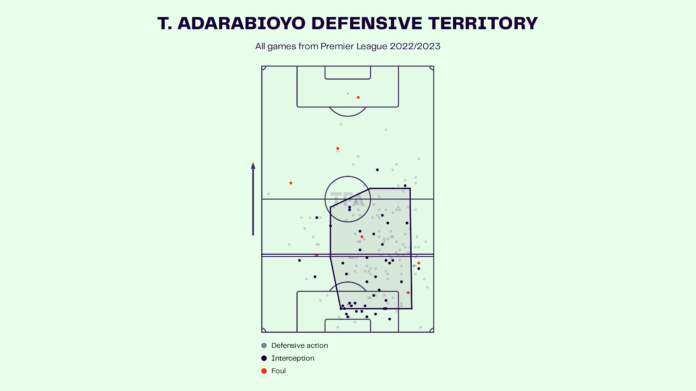 Tosin Adarabioyo is an English professional footballer who plays as a centre-back for Premier League club Fulham. Adarabioyo started his professional career with Manchester City, where, after progressing through the club’s youth ranks, he made his senior debut in 2016. In October 2020, with a year remaining on his contract, Adarabioyo ended his 18-year association with Manchester City when he joined Premier League rivals Fulham on a permanent deal.

This season, Adarabioyo has made 14 Premier League appearances and is part of a Fulham side. His performance on the pitch has been impressive, and several top European clubs are following the English defender, including Ligue 1 side, Monaco, who are currently in the market for a centre-back. Let’s look at some of his stats for Fulham in the current season.

Overall performance for Fulham this season 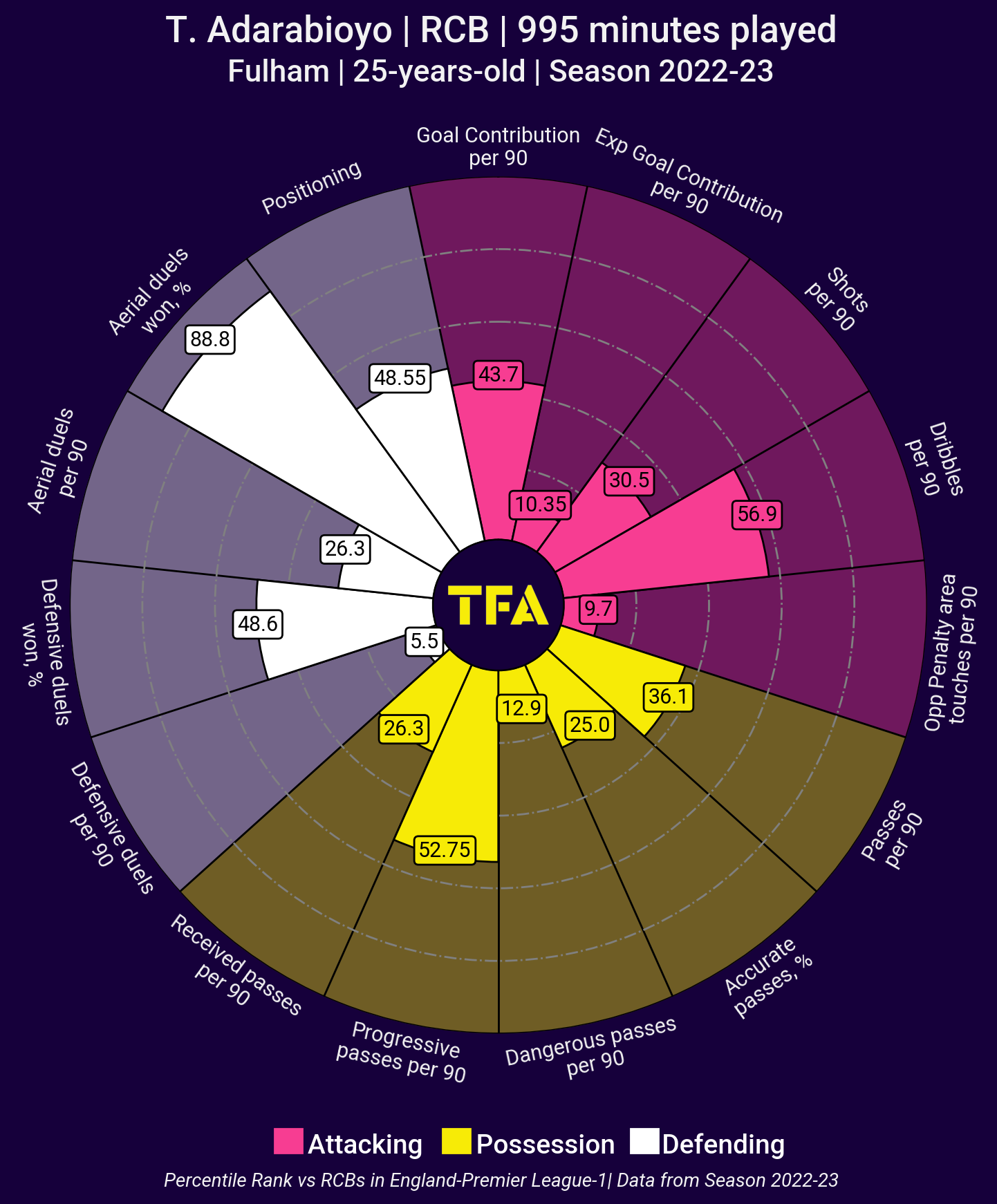 The above viz shows the percentile rank in comparison to the other centre-backs in the Premier League. Tosin is ranked highly for success in the air and winning aerial duels. The Englishman ranks relatively low in terms of success in defensive duels but contests the lowest number of defensive duels in the league compared to other centre-backs. The man from Fulham ranks decently in making progressive passes and attempting a few dribbles here and there. Overall, Tosin Adarabioyo has played 14 matches in the Premier League for Fulham in the 2022–23 season. 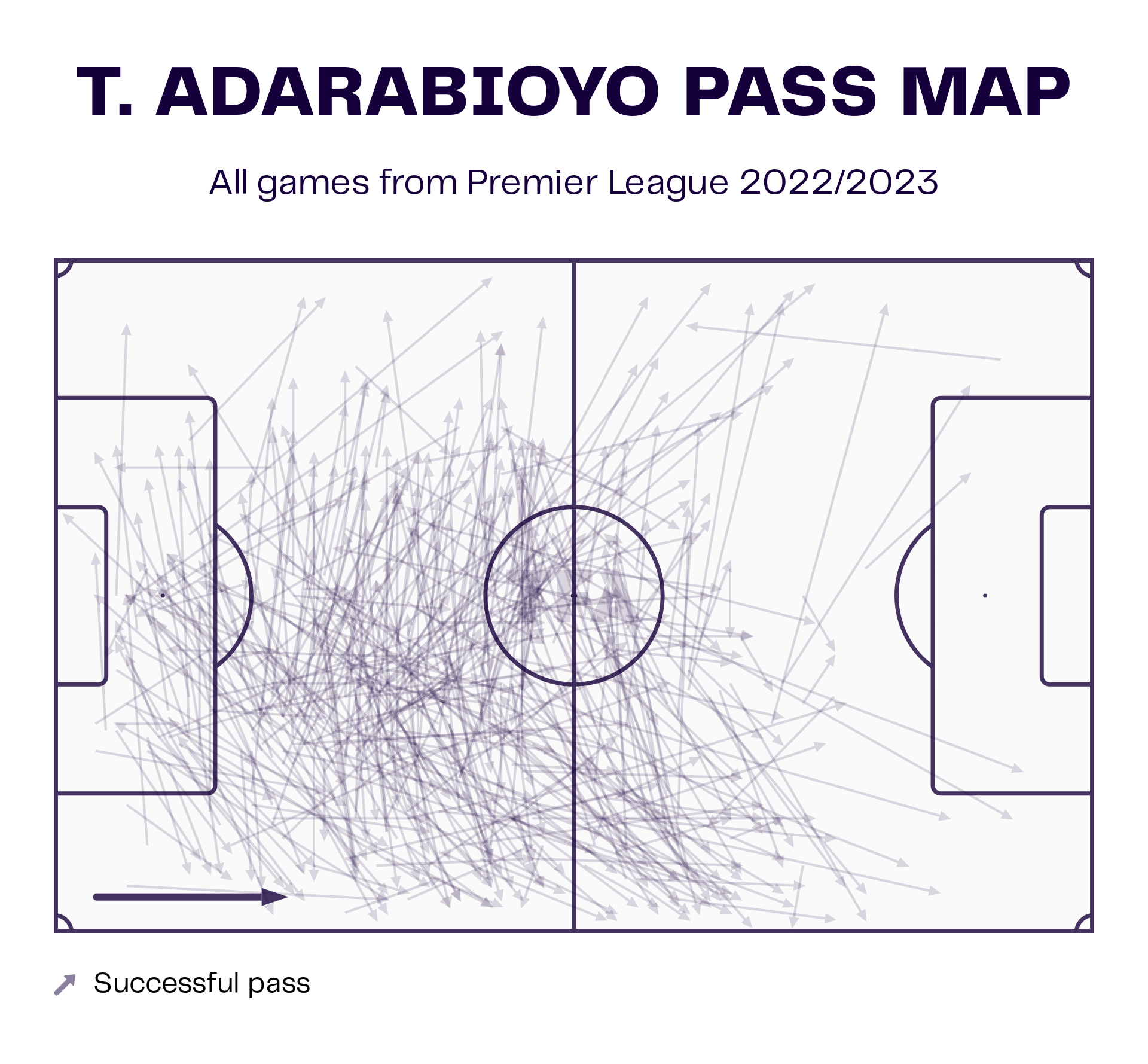 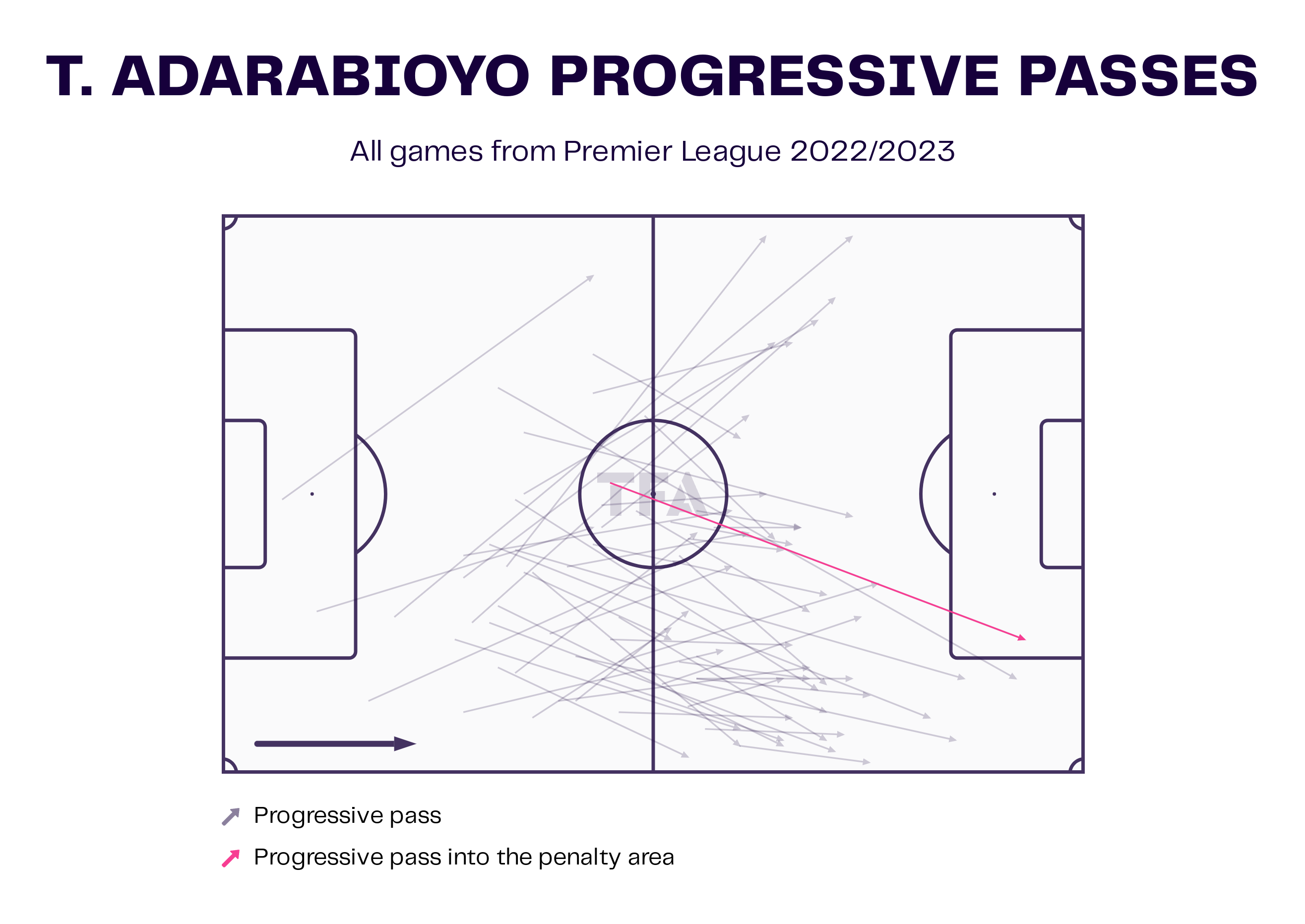 Adarabioyo covers the central defensive area in the defensive and middle thirds for his club. The centre-back shows most of his intensity on Fulham’s right side of the defensive third. Overall, the Englishman makes 40.3 passes on average with 86.2% pass accuracy. He makes 0.89 progressive runs per 90 minutes and mostly prefers to release the ball into the midfield or wider areas, averaging 16.22 forward passes per 90 minutes. Additionally, he manages to make 0.59 passes to the penalty area per 90, having a 25% accuracy.

The Englishman in defence 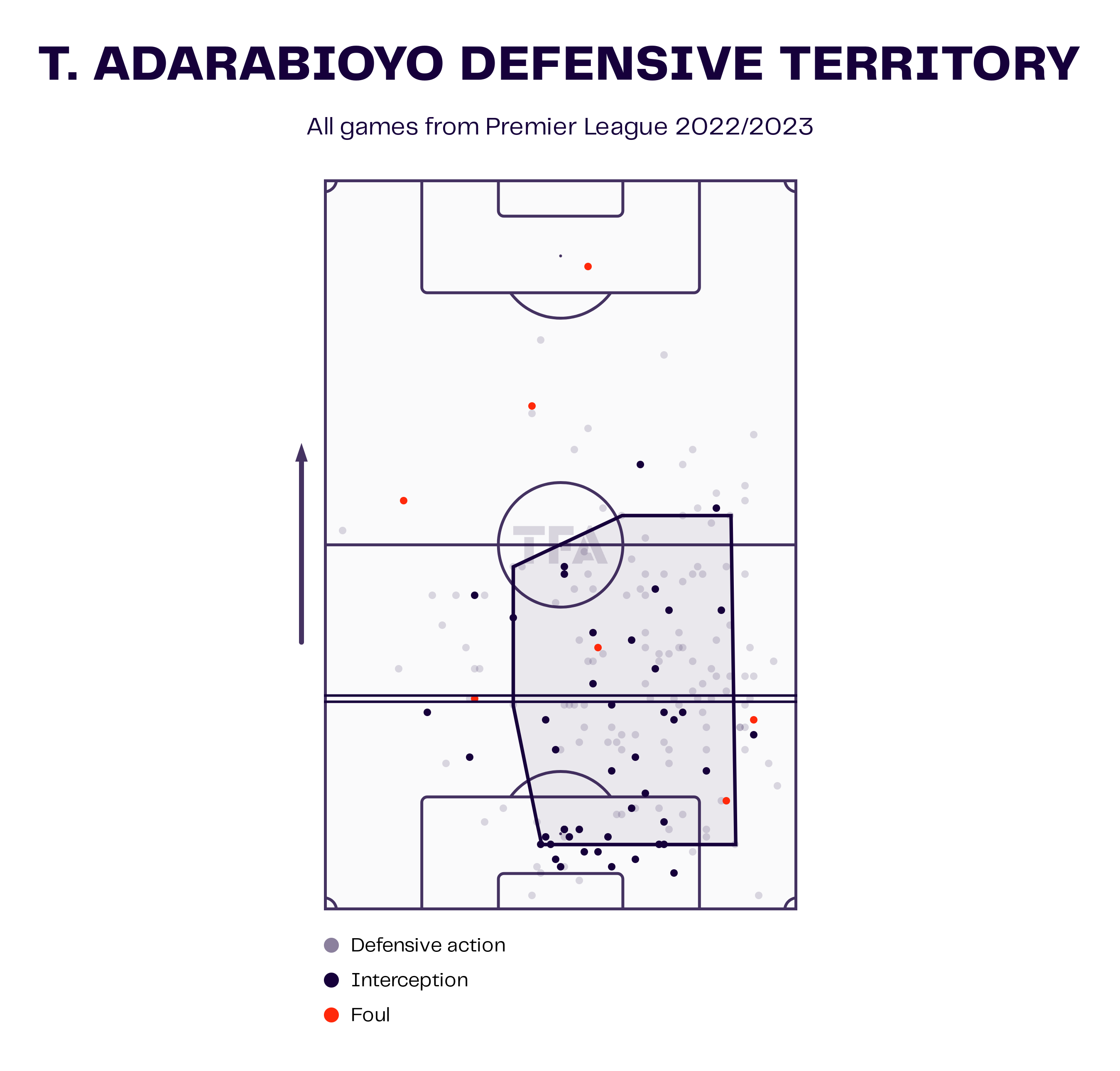 The above viz shows the defensive territory of the Fulham centre-back. Tosin has made more than ten interceptions in the box and has given up zero fouls while doing so. He makes 7.04 interceptions per 90 with a win rate of 67.4% in defensive duels. He is a part of 3.19 defensive and 3.11 aerial duels per match and wins 71% of aerial duels. In the 14 games he has played this season, Tosin has only committed seven fouls. He gives up only 0.52 fouls per 90 and is clinical while defending, making 10.59 successful tackles in the opposition’s half per 90. Most of his interceptions have come in the defensive third and his box. 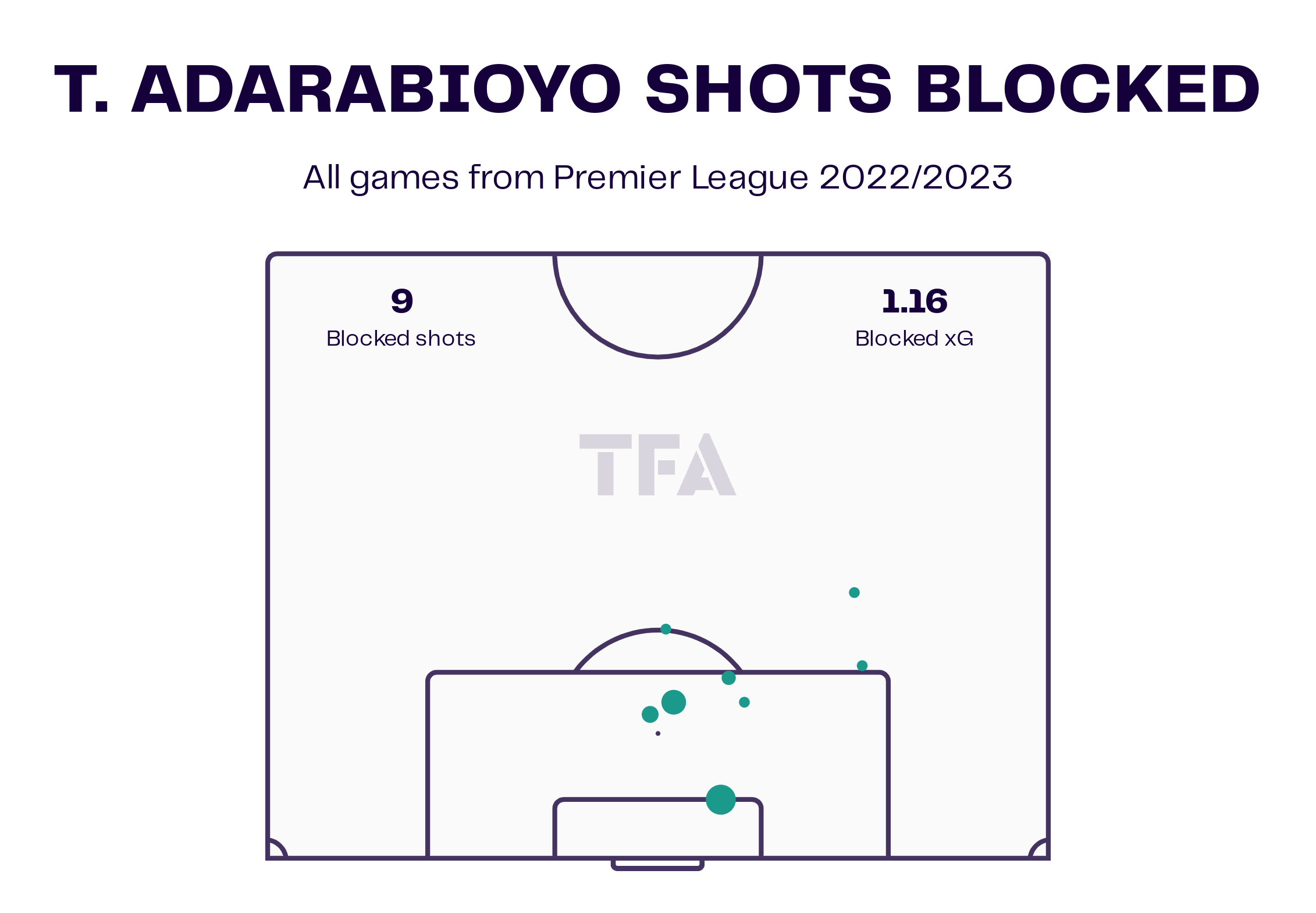 The above viz represents the shots blocked by the player over the current season. He has a shot block xG of 1.16 and has blocked nine shots. Most of his blocks have come from inside the box, but some are also outside the box. He averages 4 clearances per 90 minutes and 0.8 shot blocks per 90 minutes. The Englishman makes maximum tackles in the defensive third, in and around the box. 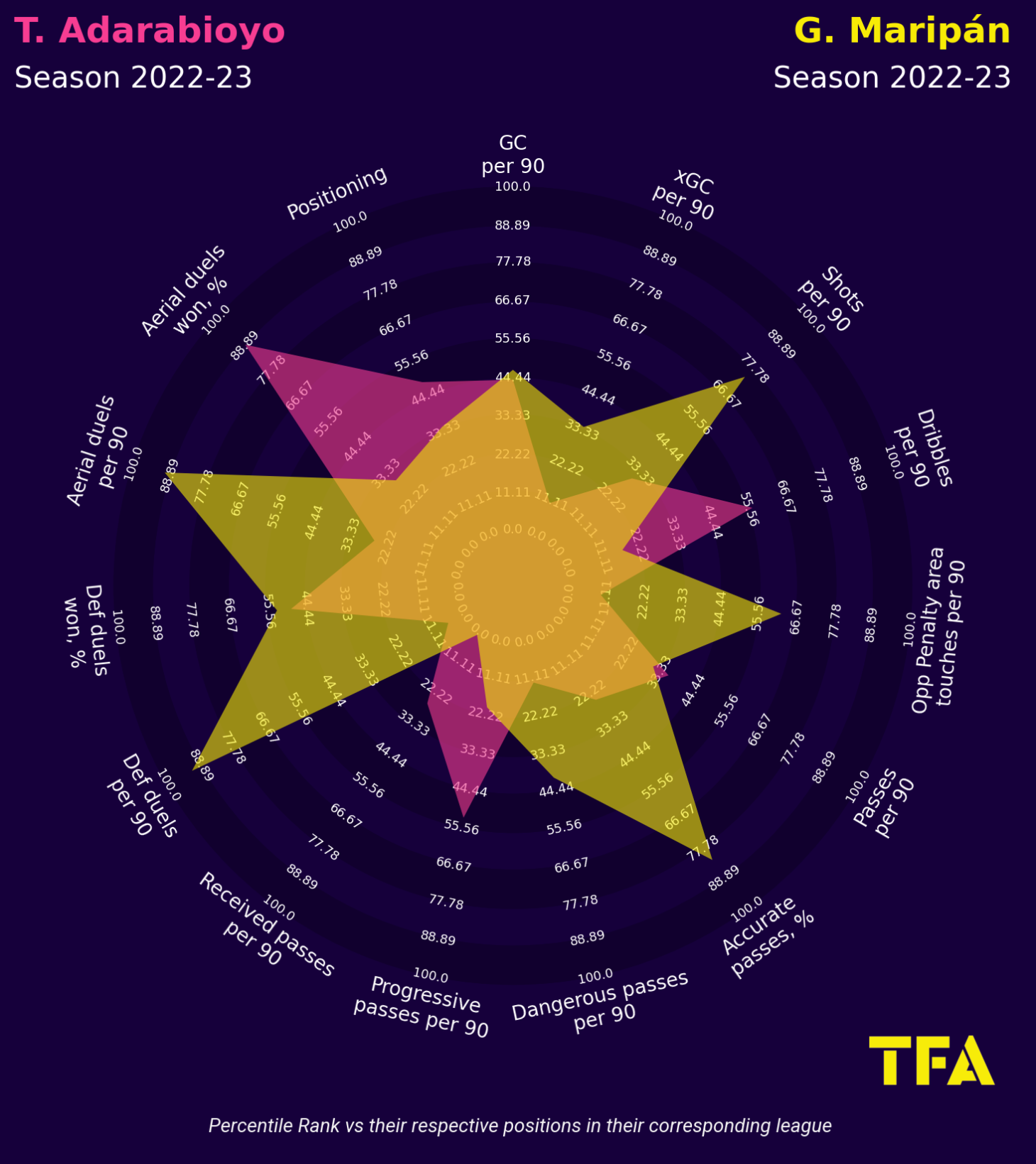 The above viz is a comparison between Tosin Adarabioyo and Maripan for Fulham and Monaco. Tosin has done well in defence and has better numbers in terms of defensive aerial duels won. Maripan, on the other hand, has only a slight advantage in winning defensive duels. Tosin also fares comparatively better in positioning stats and has a good sense of the necessary movements on the pitch.

Overall, Tosin is a player with tonnes of experience under his belt who can provide the necessary help in defence. He has the ability to guide the backline and is a good leader at the back. He is clinical while defending and does not make silly fouls on the pitch. His performance in the Premier League has proven his worth as a player. He is skilled with the ball and knows his way around the field. Adarabioyo could be the player to feature alongside Axel Disasi for the rest of the season, with the Principality side looking to secure Champions League qualification, and Monaco will be pleased to have him on board as soon as possible.