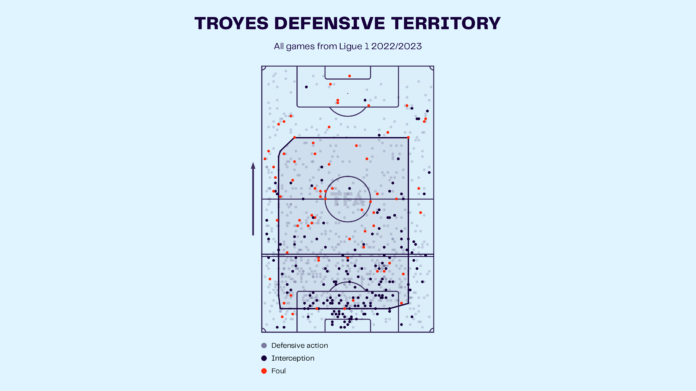 Troyes are having a tough welcome in the French top flight. They were promoted to Ligue 1 just last season. Troyes have just one league win since September and stand 14th in the table after 19 matches, just three points above the relegation zone. This season in Ligue 1, Troyes’s form is poor overall with four wins, six draws, and nine losses. This performance currently places Troyes at 14th out of 20 teams in the Ligue 1 table, winning 21% of matches. Troyes’s home form is poor with the following results: one win, six draws, and two losses, and their away form is considered average, as a result of three wins, zero draws, and seven losses. Troyes has scored a total of 30 goals, having let in ten more this season in Ligue 1. Let’s now look at some stats that capture Troyes’ Ligue 1 2022/23 season in terms of their performance in defence. 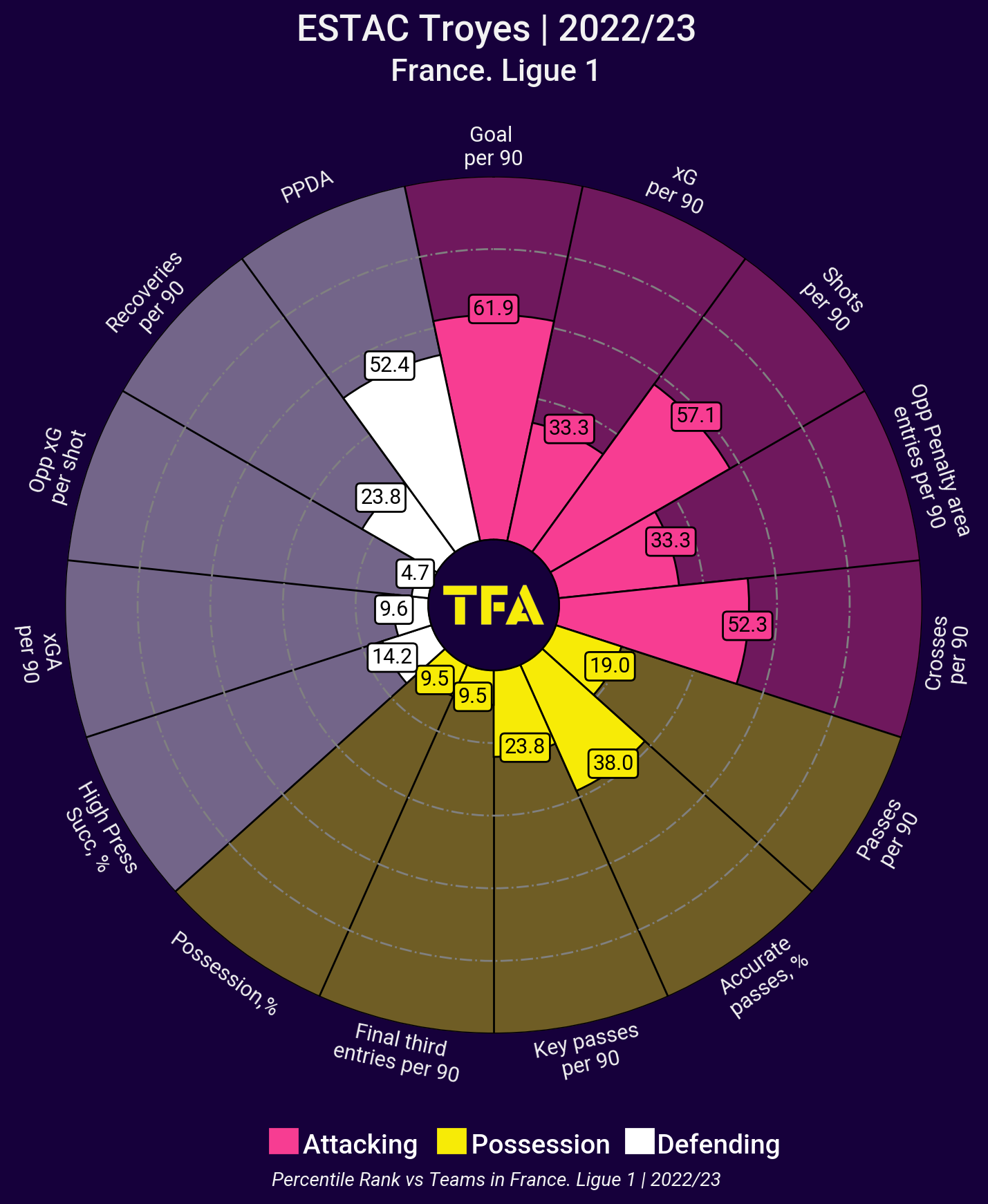 Troyes have had a very upsetting season so far and are fighting to stay out of relegation. They have recently appointed a new manager and are hoping to survive the battle. The above chart shows the percentile rank of Troyes in comparison to other teams in Ligue 1. It can be observed that Troyes have struggled in defence. Their poor form in defence has led them to concede 40 goals in just 19 matches. Troyes are somewhat decent in terms of attacking, performing reasonably with respect to goals and shots per 90. They are poor in terms of possession as well and also lack high pressing success rates. 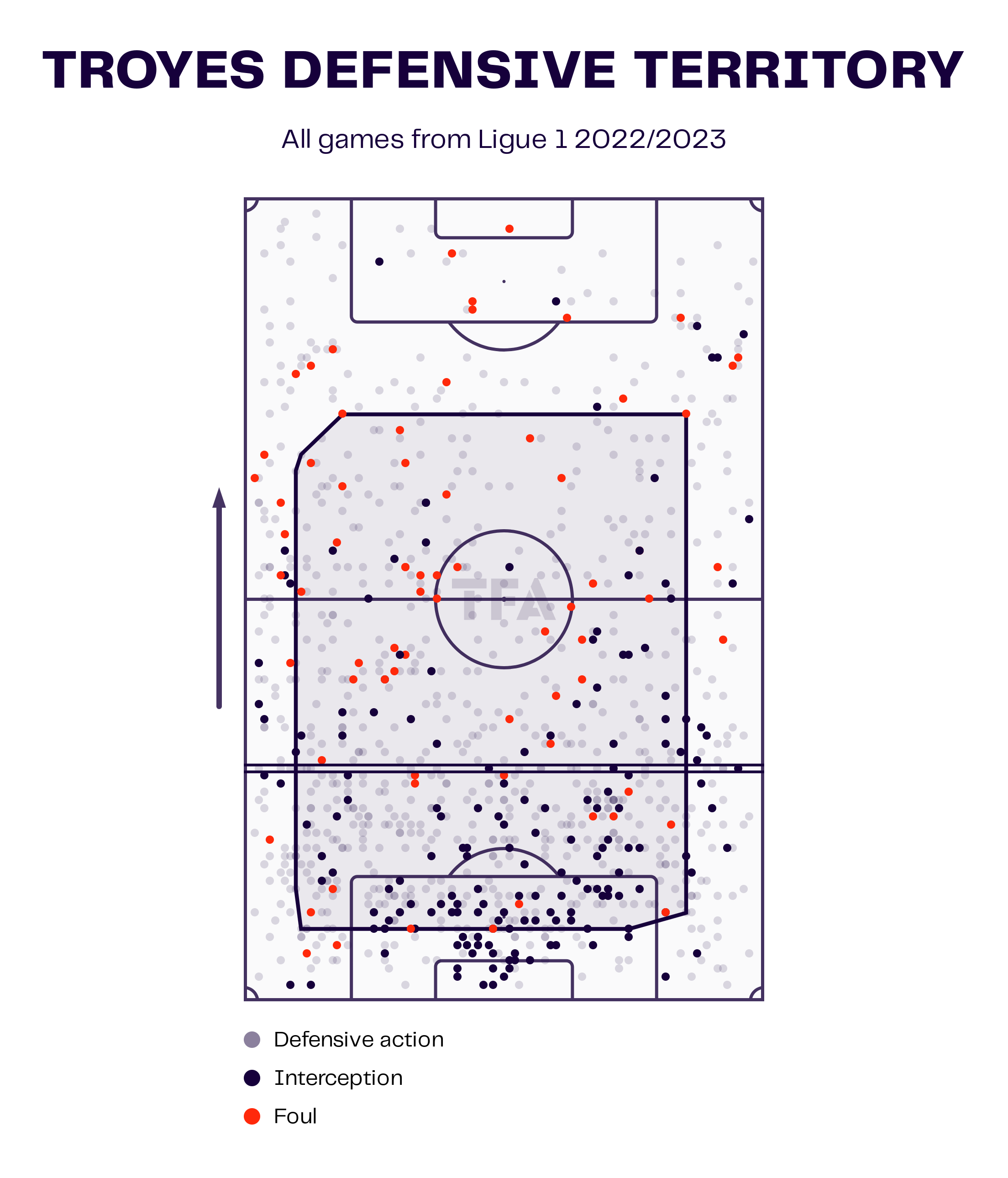 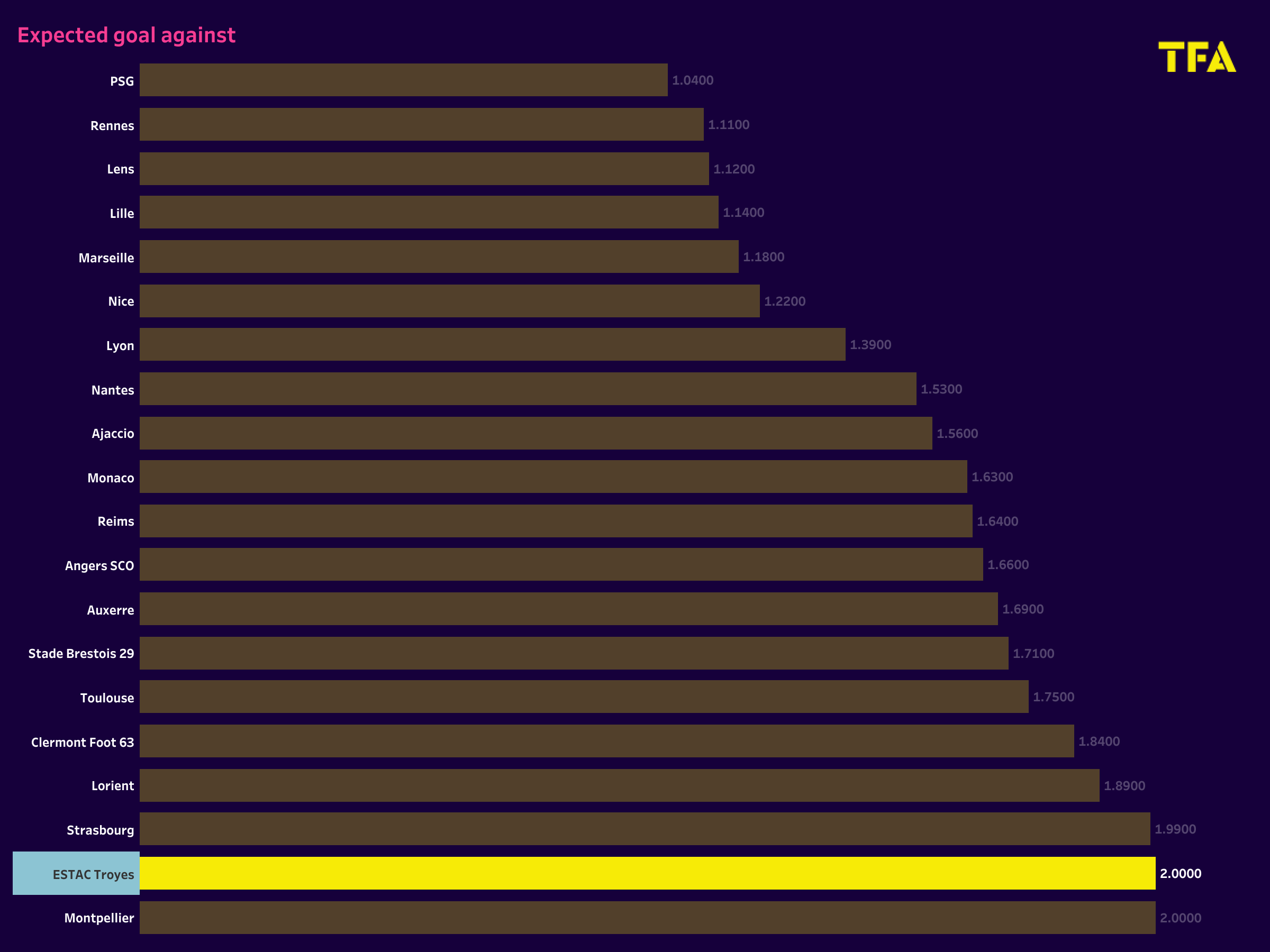 The above viz shows the defensive territory of the team. It indicates that Troyes are involved in a lot of defensive actions in the defensive third, and the team makes 44.32 interceptions per 90. They have committed numerous fouls in their half, including a few in the box, for an average of 10.47 fouls. The team makes 73 recoveries and attempts 189 duels on average, with a win rate of 47.4 percent. Defensively, they possess numbers that are similar to those of their opponents in the current season, but they still have work to do in the department of goals conceded on average, as they let in 2.11 goals as compared to their opponent’s 1.58 goals conceded per 90 minutes. They have ranked among the bottom two clubs in Ligue 1 for expected goals against per 90 minutes, which is a major reason for their poor standing in the table.

Not the best duels 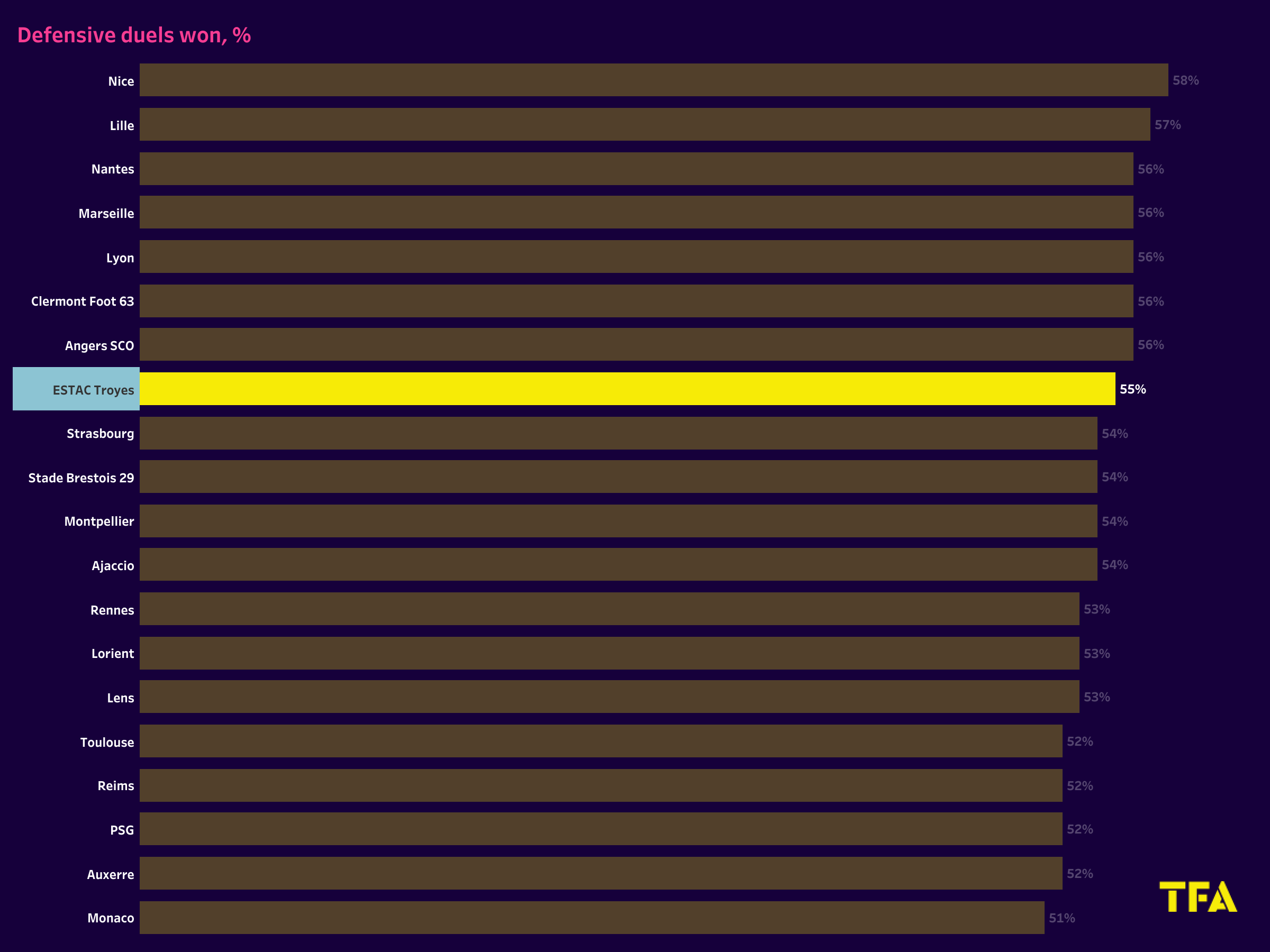 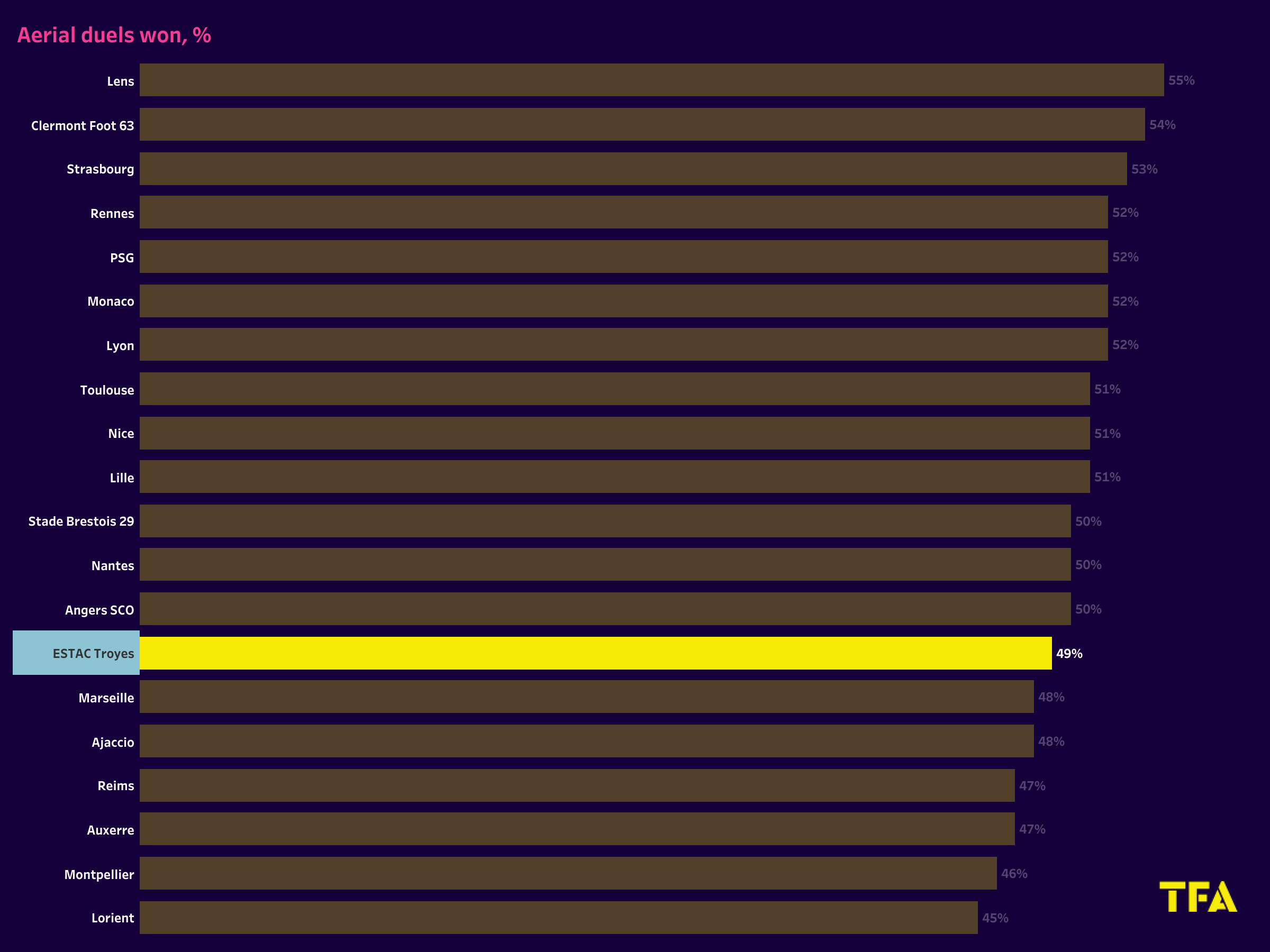 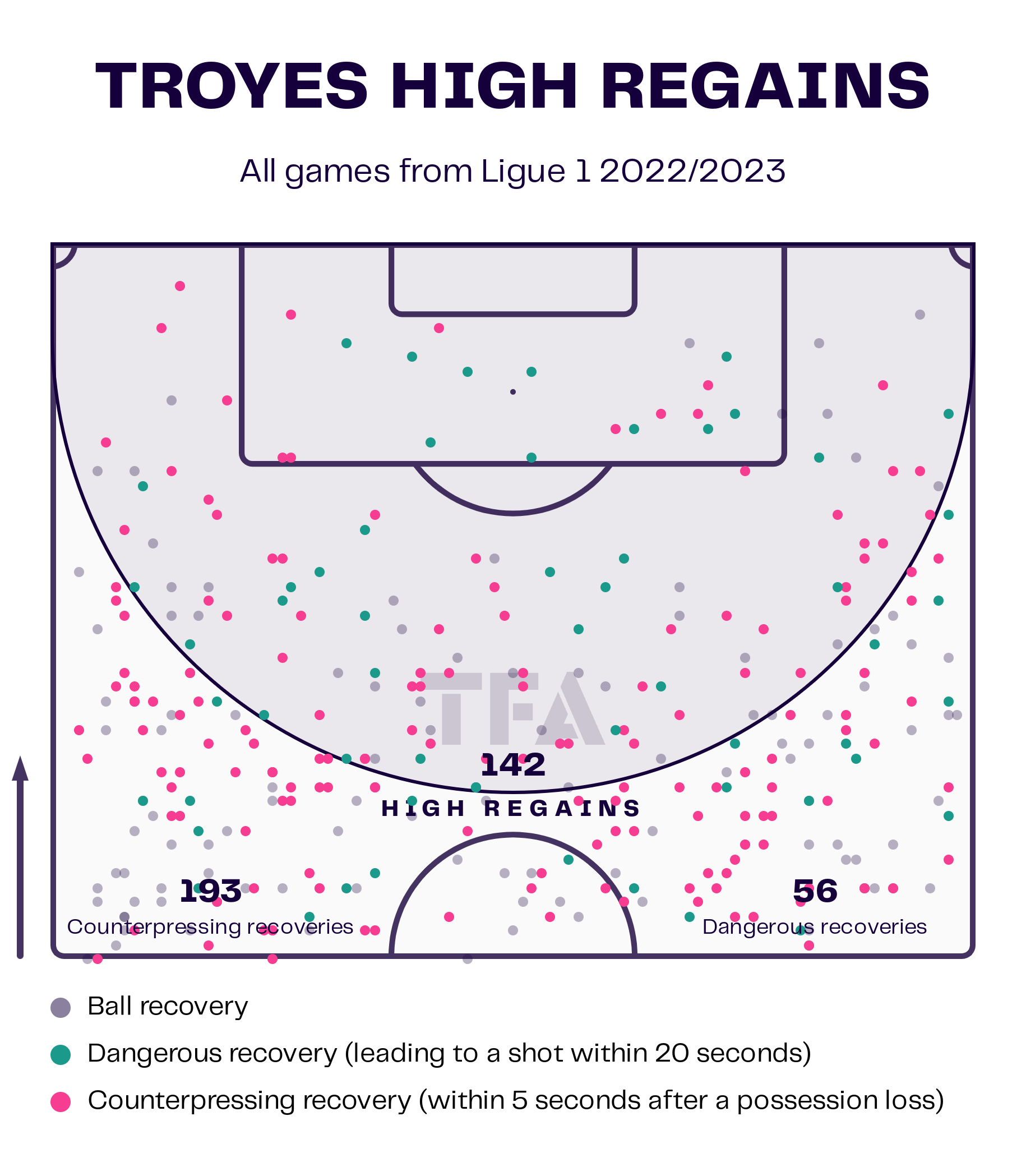 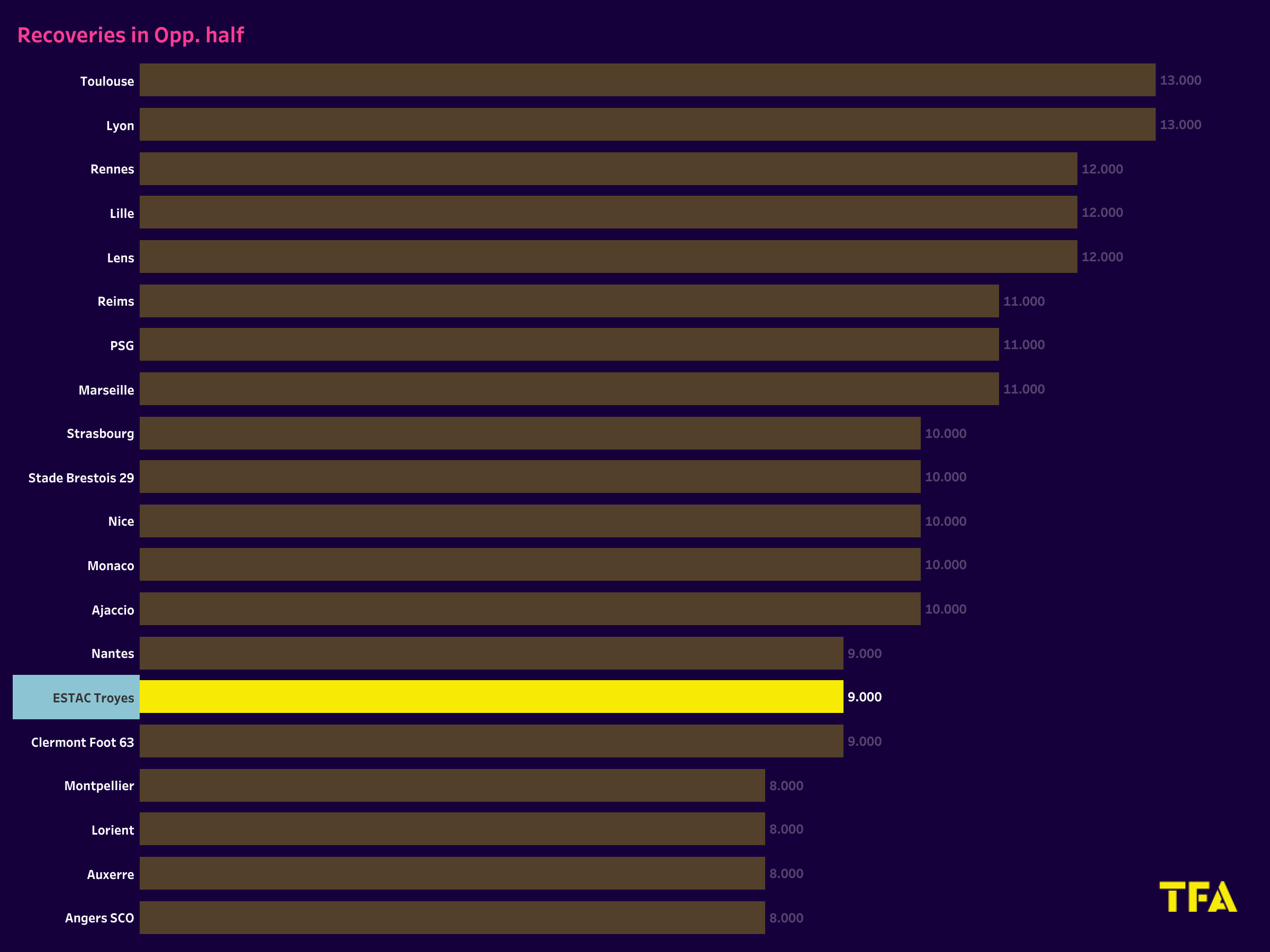 The above viz is a representation of the high regains made by the team in the current season. Troyes have made a total of 193 counter-pressing recoveries within five seconds of losing the ball. They have also made a total of 142 high regains in the final third of the pitch. In addition to that, they have made 56 dangerous recoveries leading to a shot within 20 seconds of getting the ball. Troyes are at the 14.2 percentile for high press success rates in the league, which is very poor. They average 73.63 recoveries this season, out of which only 9.0 are made in the opponents’ half per 90, which is very low in Ligue 1.

Overall, Troyes are having a difficult rise to Ligue 1 and will be hoping to turn their results around by putting up more wins on the board. Troyes will need to work on their defensive gaps and not let in goals so easily if they are to survive in the top flight. They are now in a crucial stage of the season and will need maximum effort to win games henceforth.

Under the microscope: How the Brazilian has fared in his second...