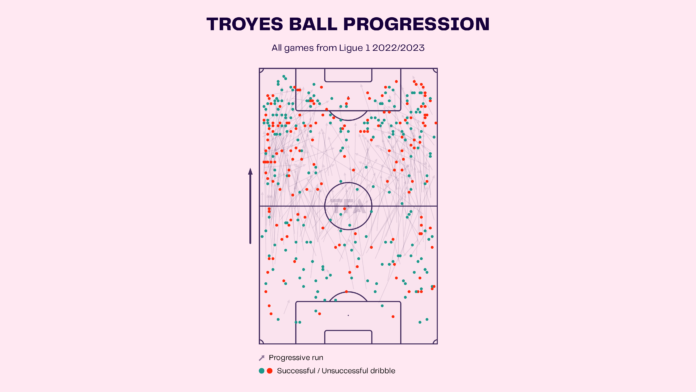 Troyes is a French association football club, based in Troyes, that plays in Ligue 1. They were promoted to the Ligue 1 just last season. Troyes is winless in the league since September and stands 13th in the table after 15 matches, just one point above the relegation zone. Troyes announced the dismissal of coach Bruno Irles from his position as head coach and appointed coach Patrick Kisnorbo in November this year. The decision to oust Irles comes at a time when the fight for survival is even more intense. There are four relegation battles scheduled at the end of the Ligue 1 season. Therefore, reducing the top flight from 20 to 18 clubs. After 15 games, Troyes are just one point ahead of 17th-placed Auxerre and the drop zone. Let’s now look at some stats which capture Troyes’ Ligue 1 2022/23 season. 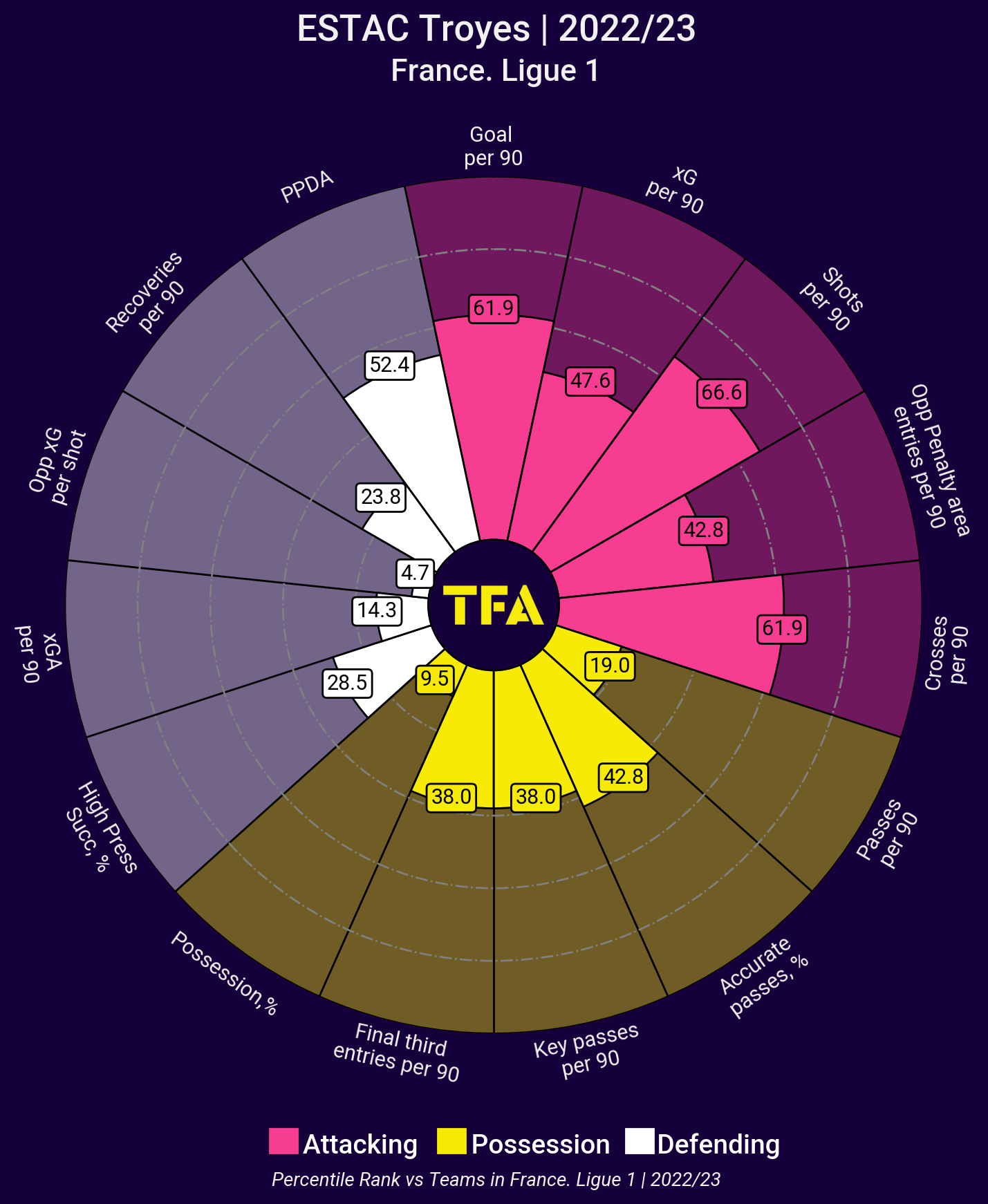 Troyes have had a very upsetting season so far and are fighting to stay out of relegation. They have recently appointed a new manager and are hoping to survive the battle. The above chart shows the percentile rank of Troyes in comparison to other teams in Ligue 1. It can be observed that Troyes have struggled in the defence. Their poor form in defence has led them to concede 31 goals in just 15 matches. Troyes are somewhat decent in terms of attacking, performing reasonably with respect to goals and shots per 90. They are poor in terms of possession as well and also lack high pressing success rates. 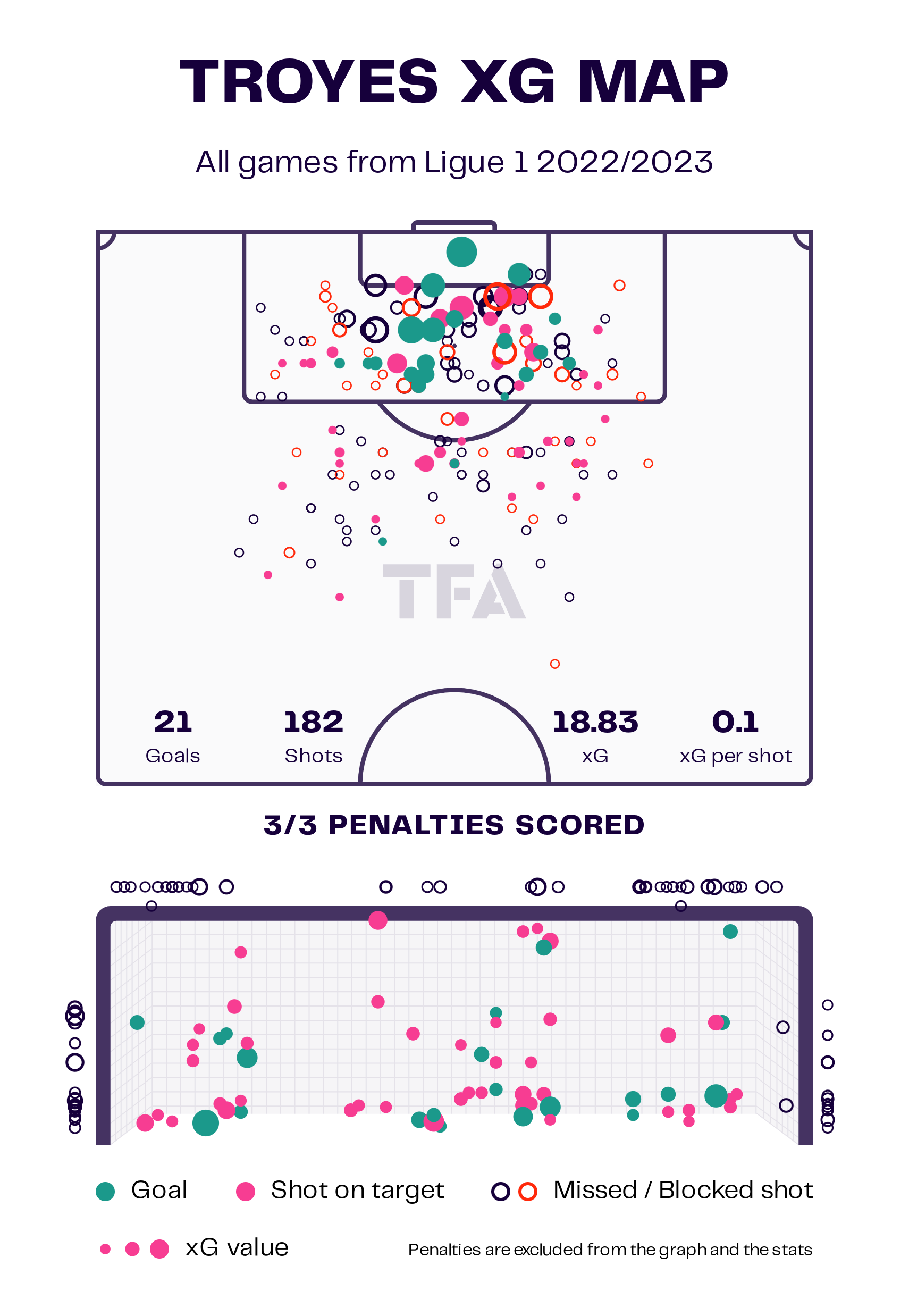 The above viz represents the xG map for Troyes in Ligue 1 2022/23. Troyes are currently in 13th position with 14 points from 15 matches played in Ligue 1. They have won three matches, drawn five, and lost seven. They have scored 26 goals and have an xG of 18.83; they have conceded 31 goals with an xGA of 27.2 (expected goals against). 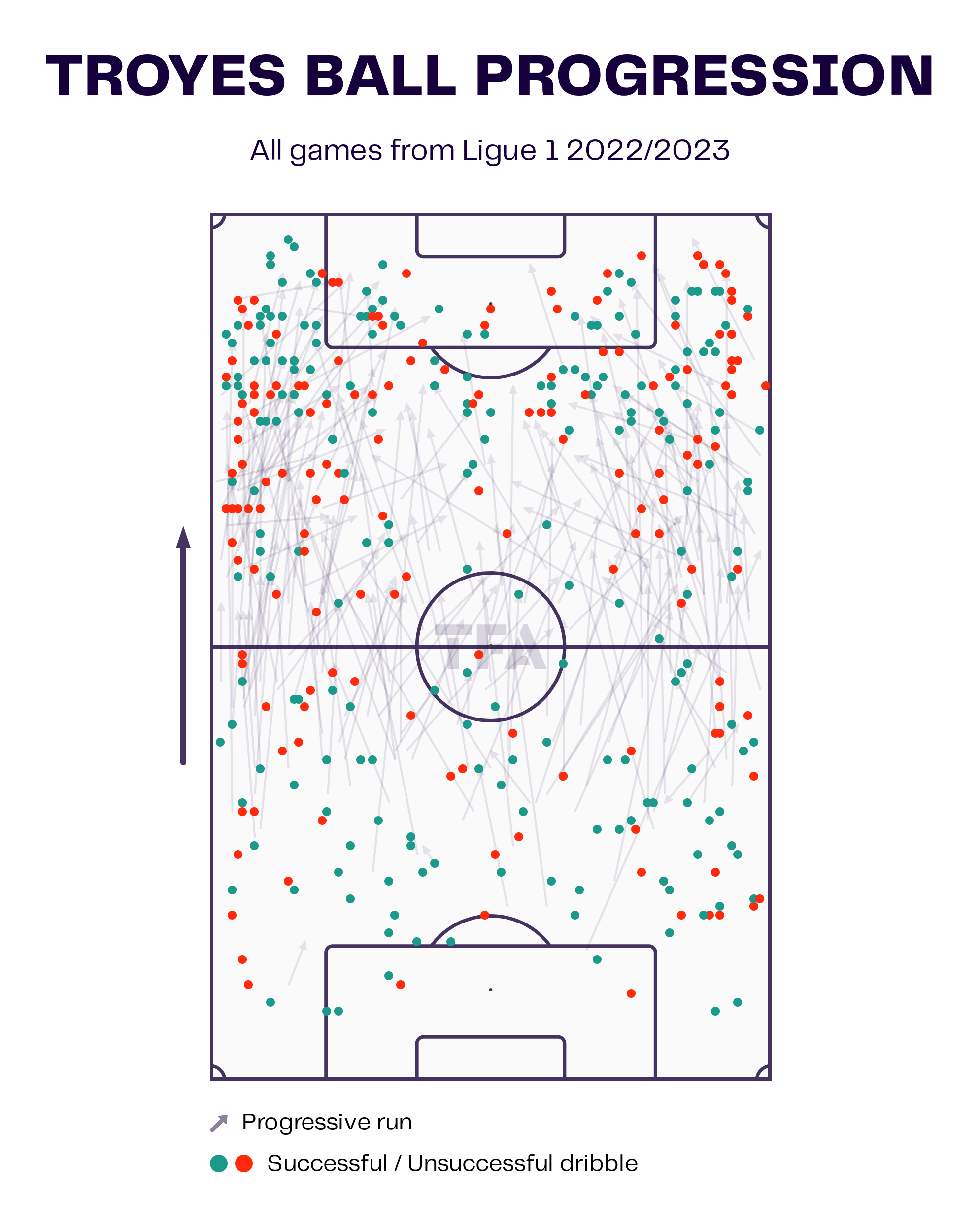 The above viz represents the overall ball progression made by Troyes in the Ligue 1 2022–23 season. It can be observed that there is a cluster of play on the flanks. There are a lot of attempts at dribbles and progressive runs being made from the wings. This also shows the lack of attacking intent from the centre. Troyes have only made 17 attacks through central zones per 90. They are making 37 entries into the final third per 90, which is the fourth-lowest total in the league. 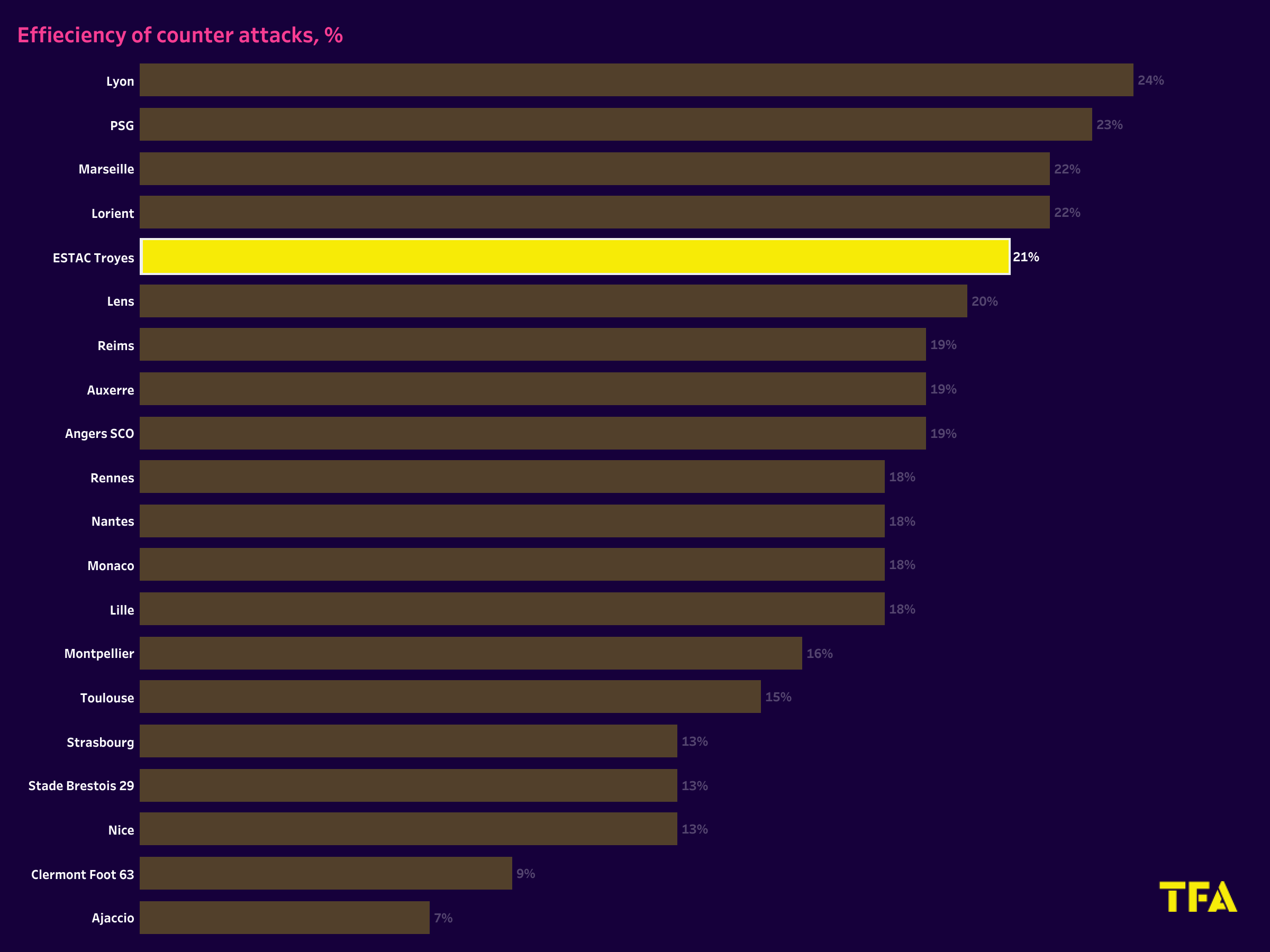 Troyes are able to conjure potent counter-attacks as compared to most other teams in Ligue 1. They possess an efficiency of 21 per cent in terms of counterattacks. Troyes needs to capitalise on this ability in order to gain some momentum in the league this season. Many other teams that are behind Troyes in this statistic are performing well in the league. Therefore, it is necessary for Troyes to improve in order to stay out of the relegation battle. 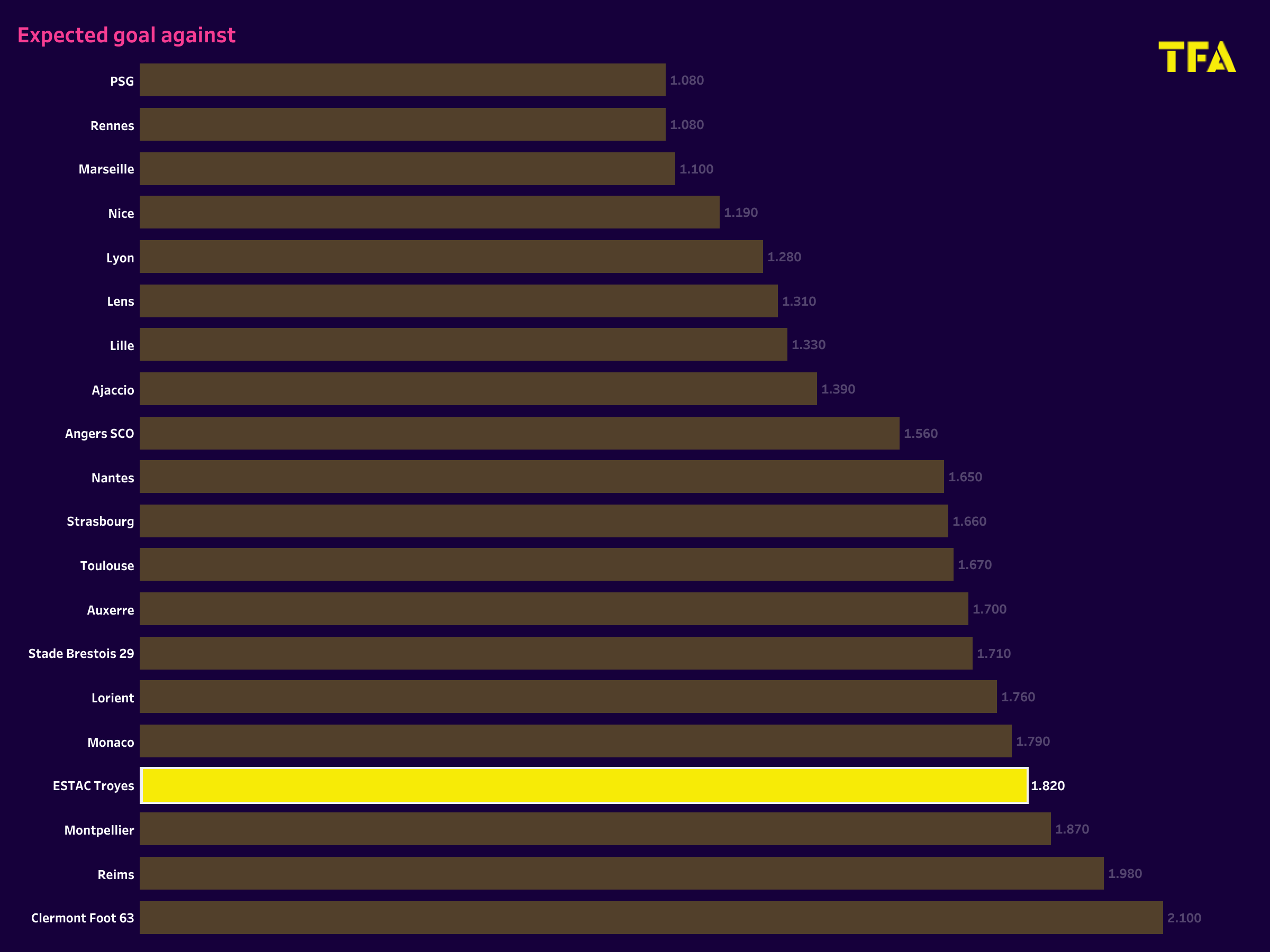 Troyes have a very poor statistic in terms of expected goals against. They clock in at 1.82 expected goals against, which is one of the worst in Ligue 1. All the bottom teams in the above viz are also among the ones battling to stay out of the relegation zone in Ligue 1 in 2022/23. Troyes need to improve and let in fewer goals if they wish to stay in the top flight next season. 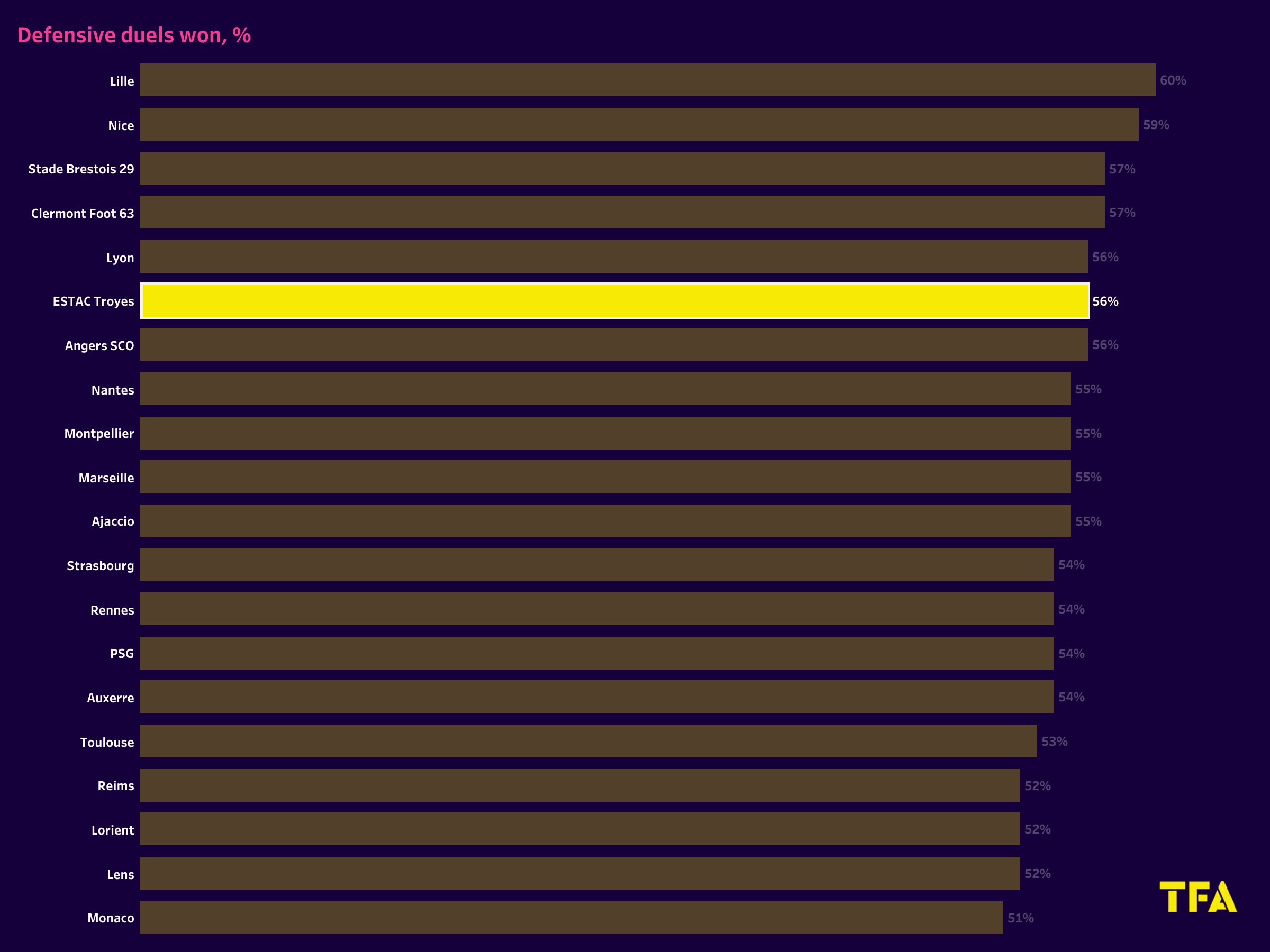 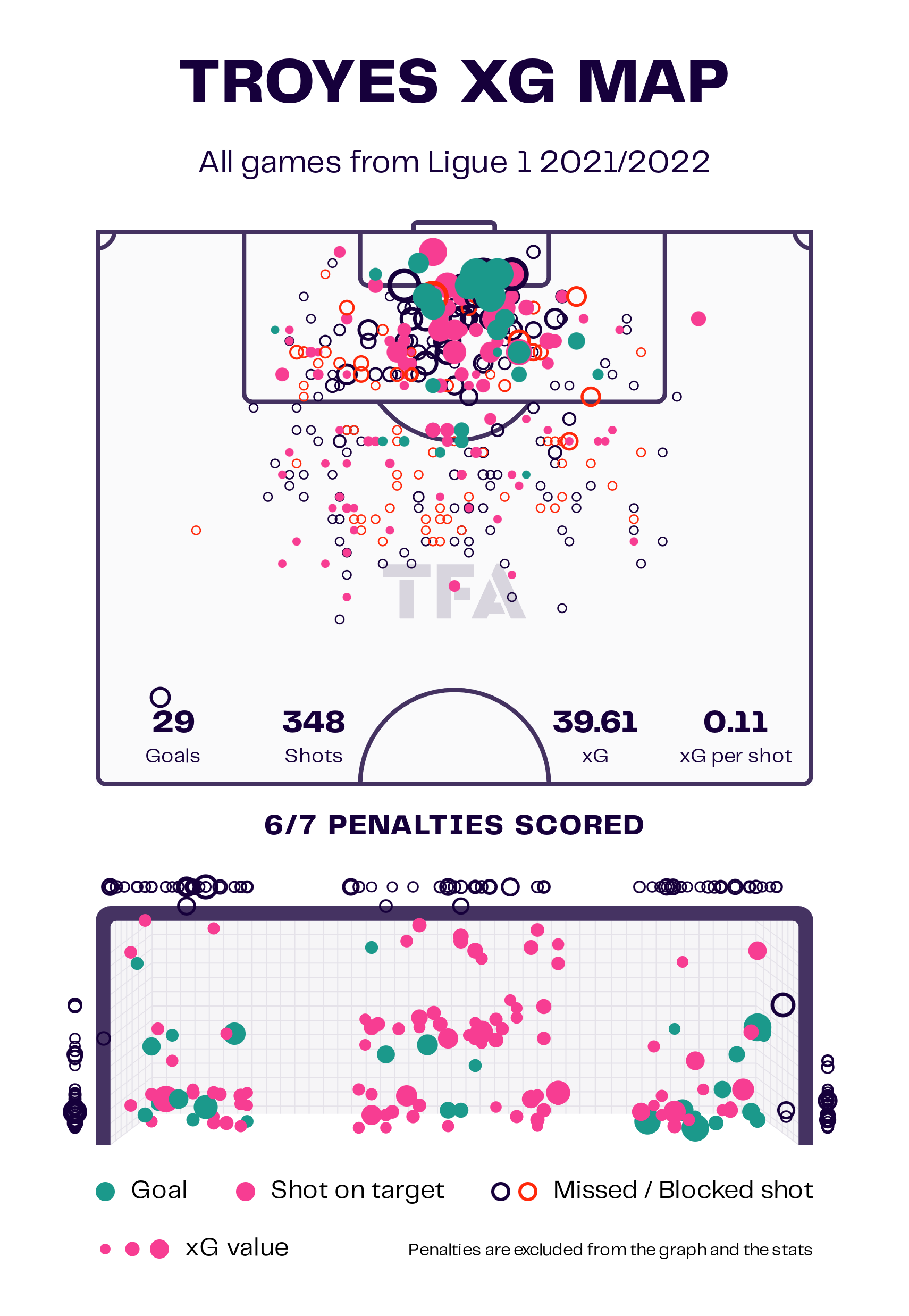 Troyes scored a total of 29 goals in the 2022–23 Ligue 1 season from a total of 348 shots attempted. They ended the season with an xG of 39.61 and an xG per shot of 0.11 for the 2021/22 season. Whereas, for the Ligue 1 2022–23 season, Troyes have scored 26 goals and have an xG of 18.83; they have conceded 31 goals with an xGA of 27.2 (expected goals against). Troyes are already on the path to improving on his performance as compared to last season. Having already scored 26 goals in 15 matches this season, the Troyes have managed to better their expected goals this season as compared to last season. They have also managed to score goals in fewer attempts as compared to last season.

Ligue 1 is a new battlefield for Troyes, and undoubtedly it is a demanding one. Troyes needs to fight until the end to stay out of the relegation zone this season. All the observations made suggest that Troyes need to improve in the majority of areas if they are to continue to play in the French top tier next season.