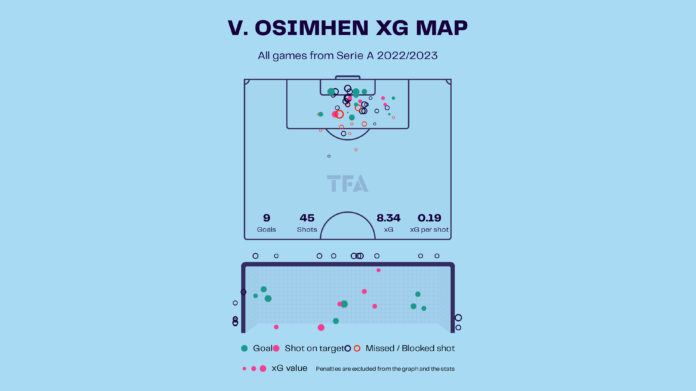 Victor Osimhen, aged 24, has emerged as one of the most lethal finishers in Serie A over the past two campaigns. In 2020, he will join Gli Azzurri from Lille in a deal worth up to €80 million. Since then, the Nigerian has scored 38 goals and laid out 12 assists in 76 appearances across all competitions. A mobile striker blessed with pace and finishing, Osimhen is on the French Giants’ wishlist, and they seek to bring him to Ligue 1. Despite rumours, he decided to remain at the Partenopei and has been crucial to their Serie A title push in the ongoing 2022–23 campaign. The league’s current top scorer and winner of the Serie A Best Young Player award last season has had a very productive 22. PSG are potential suitor for this gem of a player, and below are some stats for the player in Serie A. 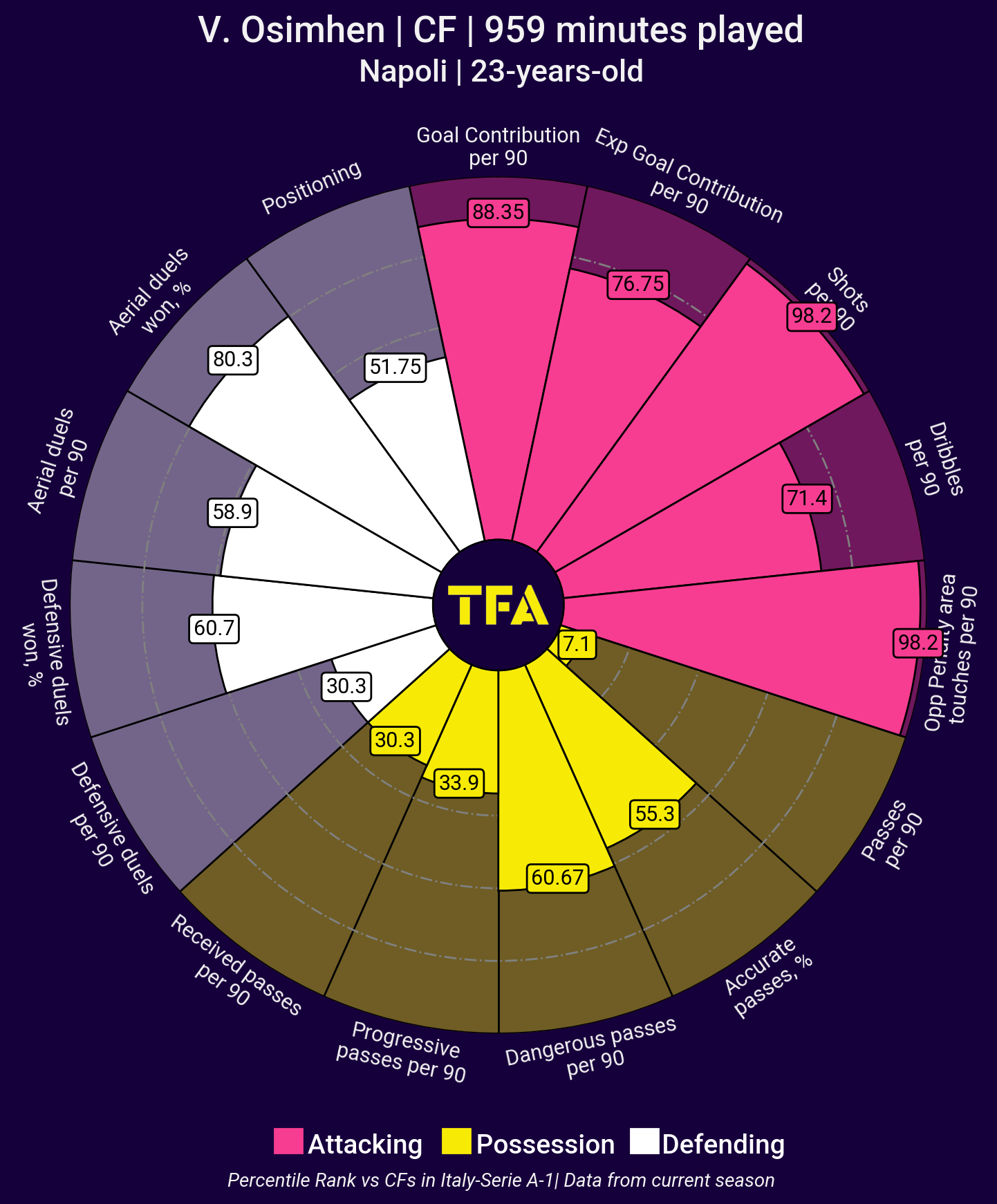 The above viz shows the percentile rank of the player in comparison to other players in Serie A. As the man in form, Osimhen is a big threat in front of goal and ranks among the top for goal contributions, averaging 0.84 goals in the league. He attempts 4.22 shots per 90 and makes 6.48 touches in the penalty area on average, which is the highest in Italy. Overall, he ranks highly in duels and attacking, proving to be an extremely effective resource for the team. 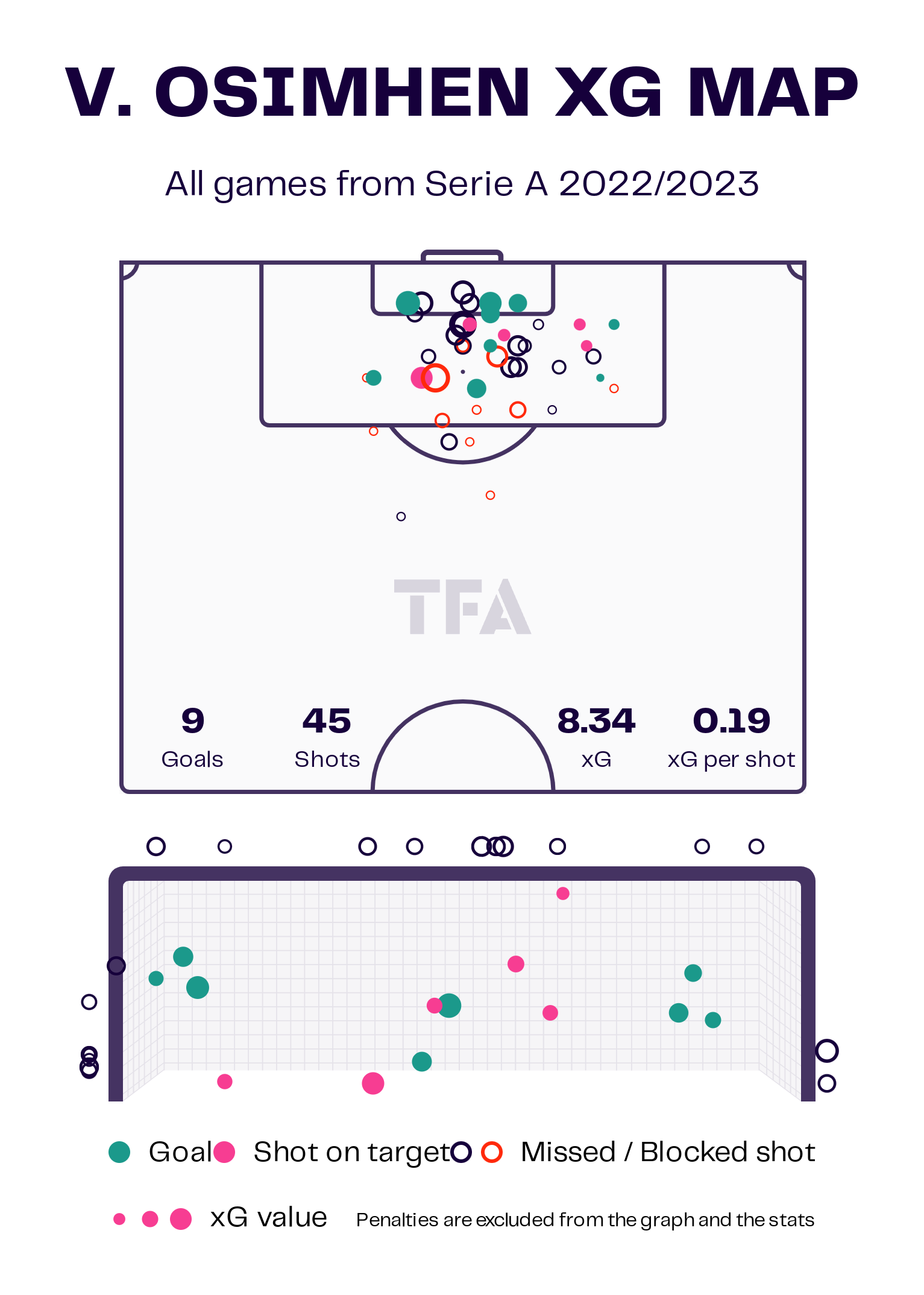 Osimhen is pumping goals for Napoli and is a crucial part of their attack. In the 2022–23 French Ligue 1 season, Victor Osimhen has played 11 matches. He has 15 shots on target from a total of 35 and has scored nine goals (8.64 xG). Victor Osimhen averages 12 passes per match with a pass completion rate of 74% and has two assists. His goals have come from inside the box with frequent long-range efforts. He is the man to watch, and he is certainly on the radar of many European behemoths.

Consistency in front of the goal 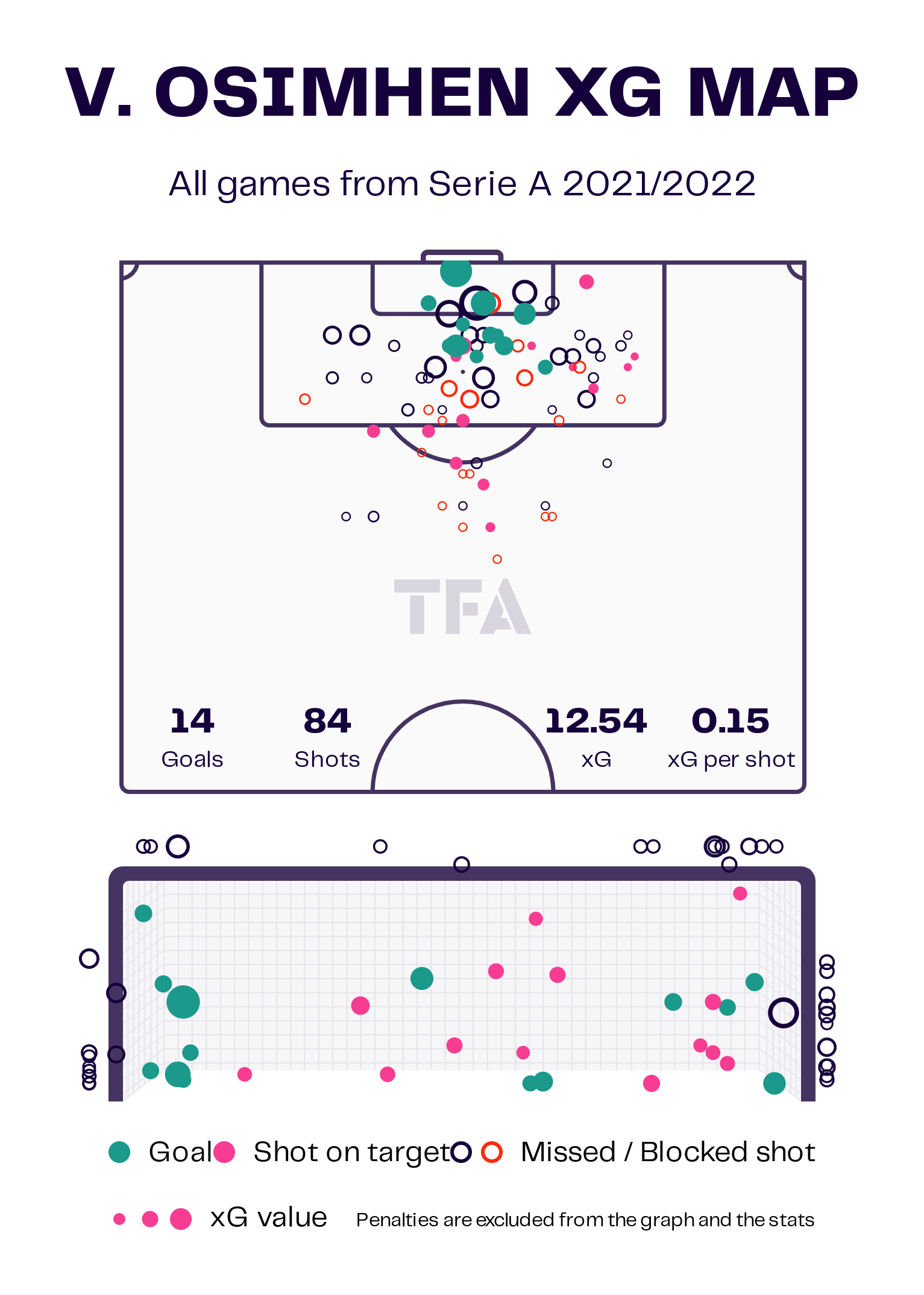 Osimhen has been consistent through the last two seasons, which is one of the reasons behind the recent development of interest in the player from various clubs. In the previous season, he scored a total of 14 goals domestically from 84 shots and had an overall xG of 12.54 for the Serie A 2021/22 season. Victor is already on the path to overtaking his last season’s tally with half of the season yet to be played. His consistent form in front of the goal is attracting plenty of outside attention. 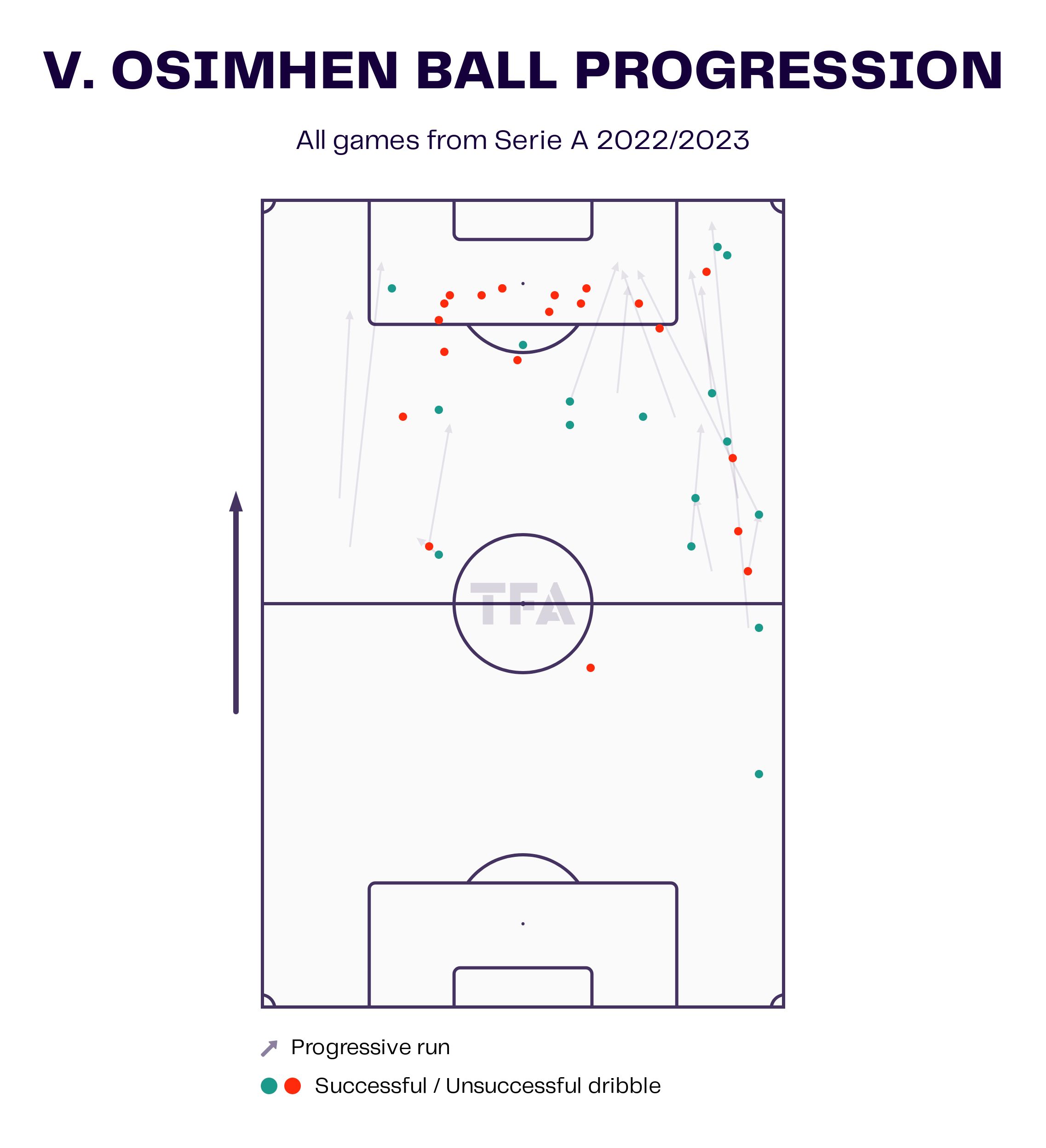 The above viz displays the player’s ball progression map along with successful and unsuccessful dribbles attempted. Osimhen makes 3.47 dribbles with a 43.2% success rate per 90. Most of his attempts have come in the final third, along with a few successful attempts in the middle third. He also makes forward progressive runs as often as 1.31 times per 90 minutes. Osimhen is full of confidence and does not hold back when taking a shot at goal with the ball in his feet. 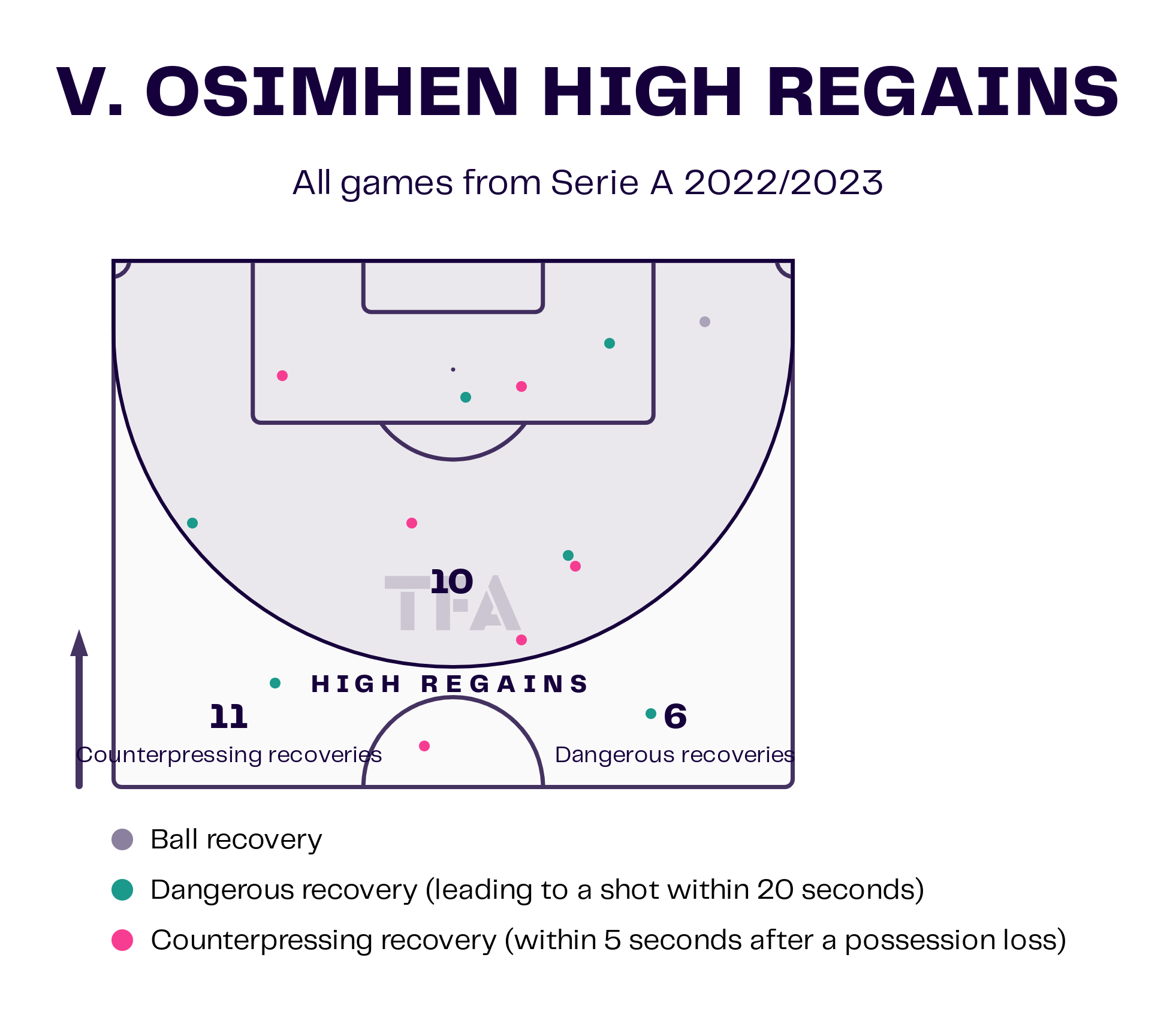 The above viz represents various high regains made by Victor in the 2022–23 season. It can be seen that he has made ten high regains, 11 counter-pressing recoveries, and six dangerous recoveries. He makes 2.53 recoveries in the opponent’s half and 1.41 interceptions per 90. Additionally, he is successful in 56% of the defensive duels contested on average. Napoli are currently on top of Serie A and are playing some of their best football; the team dominates possession and is quick to pounce on the opponents after a loss of possession. Osimhen is skilled at putting pressure on top, and the likes of PSG will surely be ticking boxes knowing these stats.

In place of whom? 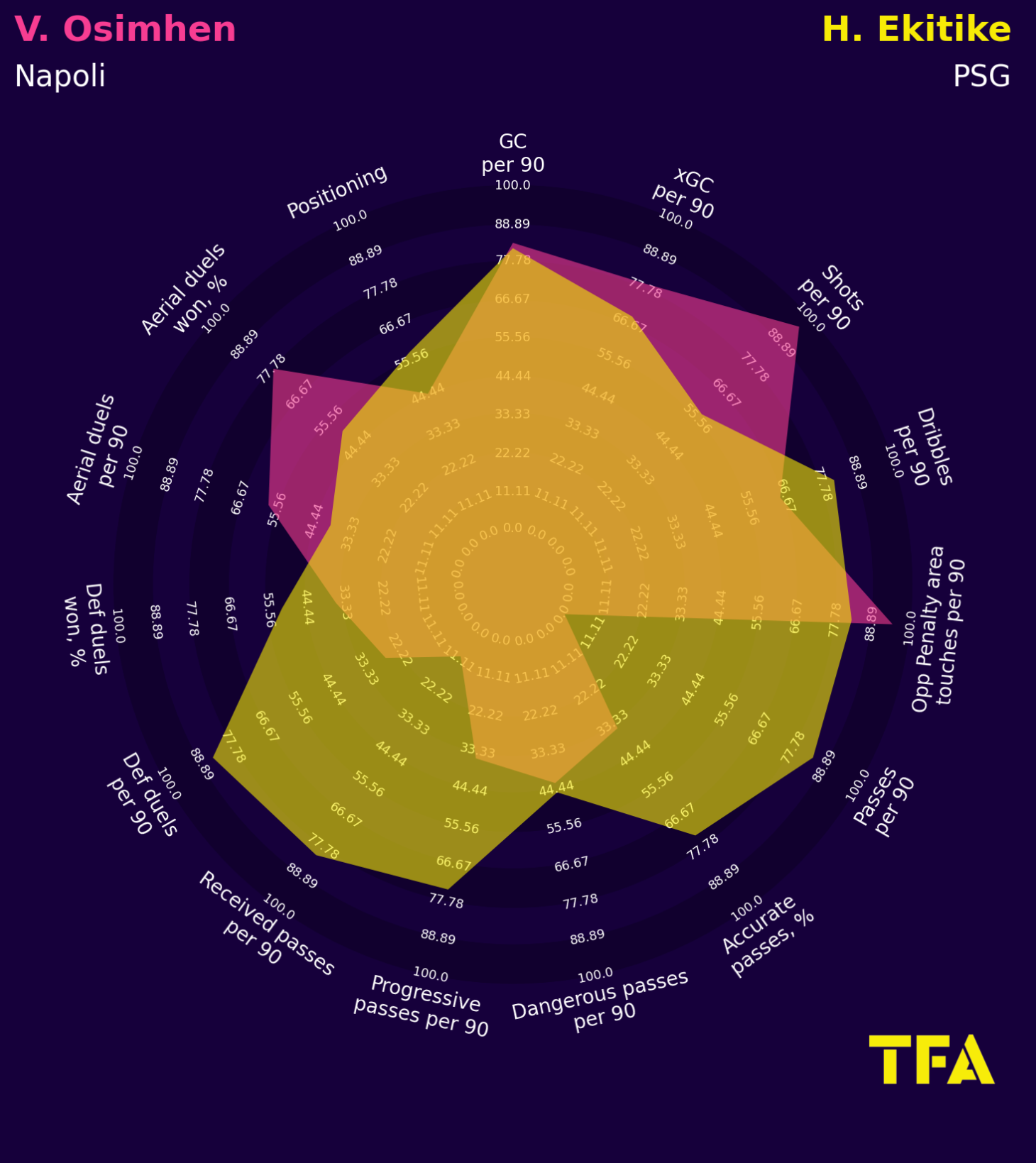 The one player who might be shown the door in case of Osimhen’s arrival would be the recent summer loan signing, Hugo Ekitike, who has a contract until next year. Ekitike has appeared in 11 games this season, scoring two goals and assisting on two others. The above viz is a comparison between the two players, and it can be seen that Osimhen is more suited in terms of attack as compared to Ekitike, who has slightly better numbers in the passing department. Osimhen also fares better in terms of aerial duels won and touches in the opponent’s penalty area per 90.

It will be interesting to see if Osimhen makes the decision to join the French giants in the upcoming future. The player possesses extreme skills in front of the goal and seems to have the rare element of consistency. He brings plenty to the table, and any side he plays will have benefits over the long run.

“It’s a very special moment after a difficult month in January”...