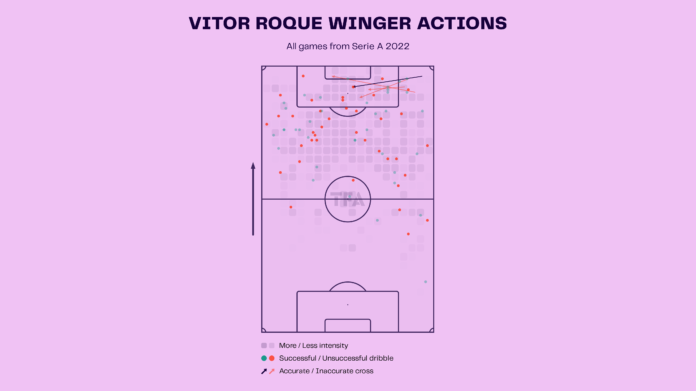 Vitor Roque, 17, is one of the prospects for the future of Brazilian football, along with Endrick. PSG have turned their attention to signing Athletico Paranaense striker Vitor Roque and have already inquired about his transfer availability. For the time being, PSG, Chelsea, Barcelona, and, of course, Real Madrid are all interested in the striking prodigy. Vitor, who is currently playing in the Brazilian League, is being closely monitored by PSG Sport. Vitor Roque is a centre forward for Athletico Paranaense in Brazil, and he is another of the country’s brilliant young talents in recent years. There is a chance that he may join Ligue 1 in the months to come. Let us now look at some stats shown by the young Brazilian. 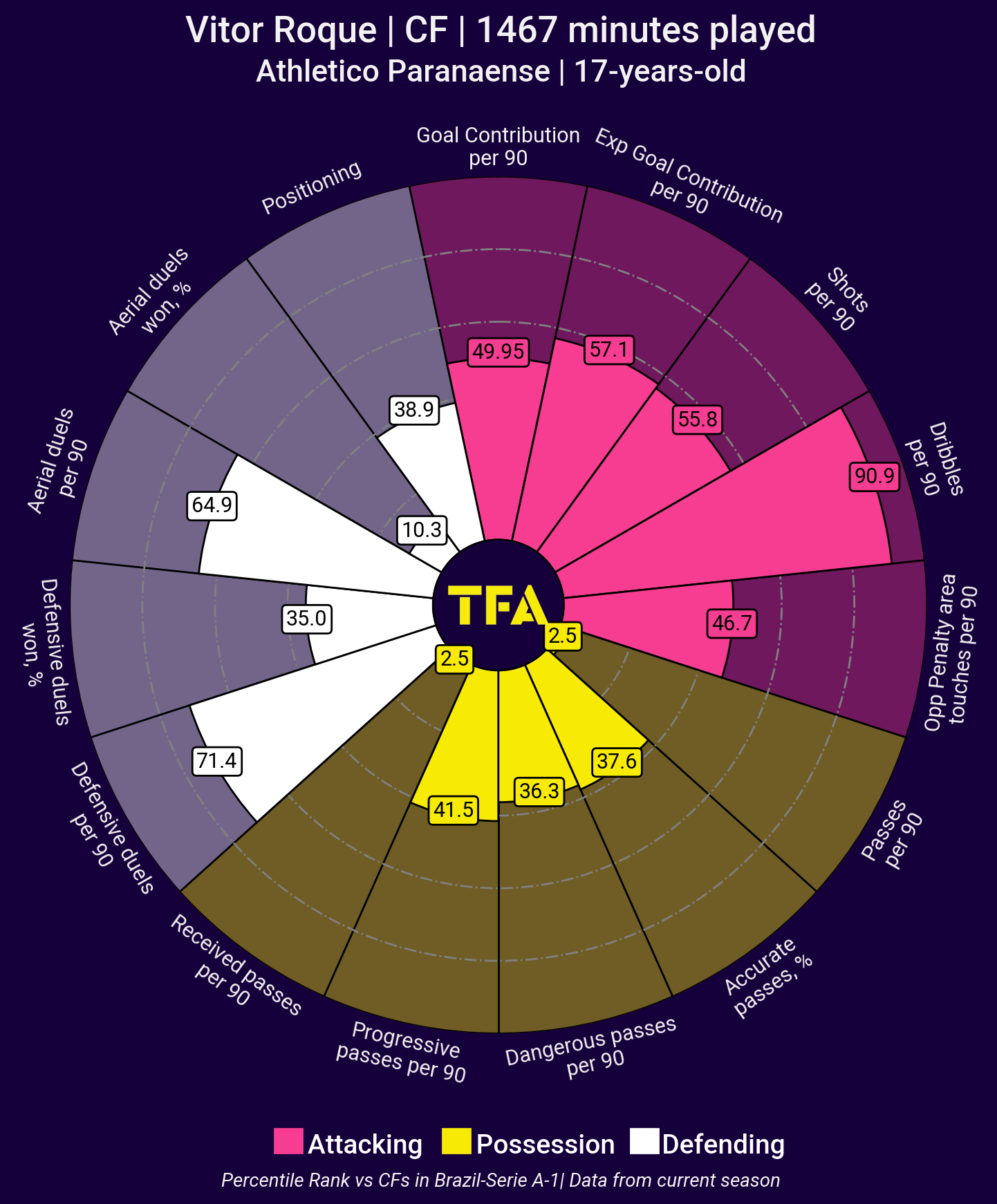 The above viz is a representation of Vitor Roque’s plays for the Brazilian Serie A club Athlético Paranaense. It shows the stats of the player in comparison to the other players featured as centre forwards in the Brazilian Serie A. Vitor Roque played 14 matches (plus 15 as a sub). His dribbling ability is off the charts, at a very high 90.9 percentile for total dribbles per 90. In defence, he has good stats in terms of defensive duels won and aerial duels won per 90 for a 17-year-old centre forward. 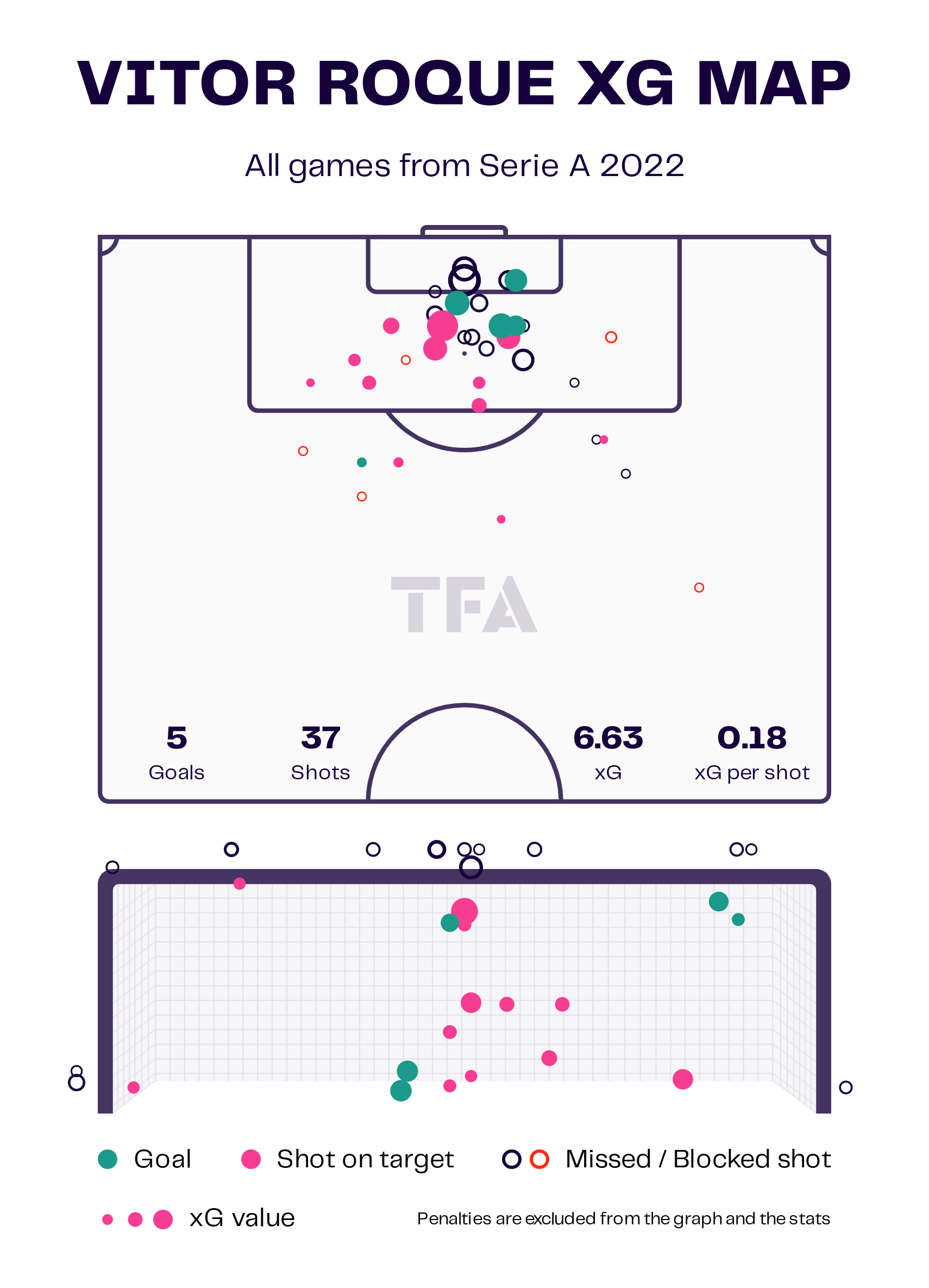 In the Brazilian Serie A season 2022, Vitor Roque played 29 matches in total, having started 14 and subbed on in the rest. They had 17 shots on target from a total of 37 and scored five goals (6.63 xG). Vitor Roque averaged five passes per match with a pass completion rate of 72% and had two assists. Vitor has scored from inside as well as outside the box. He also has shots on goal from outside the box. 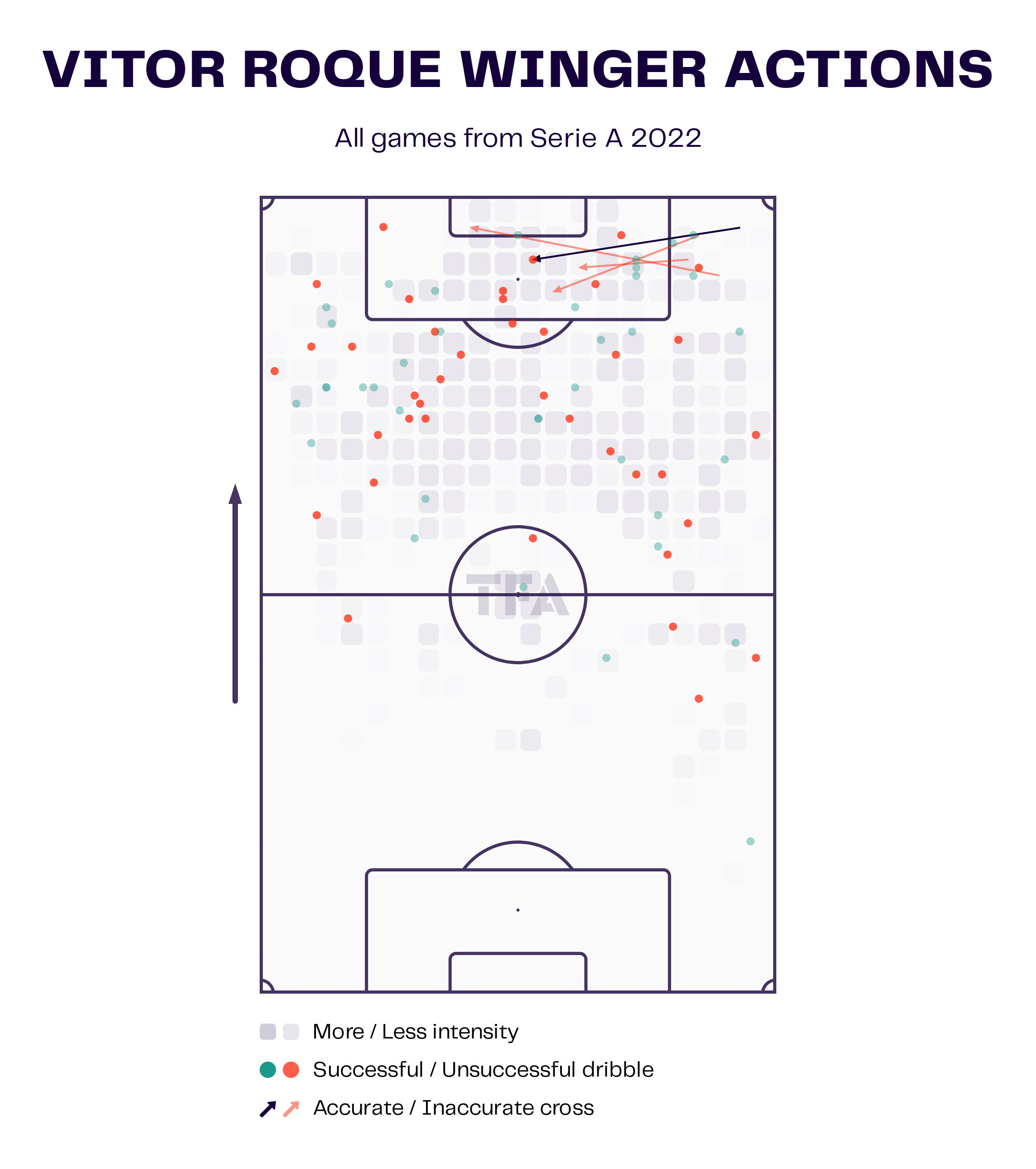 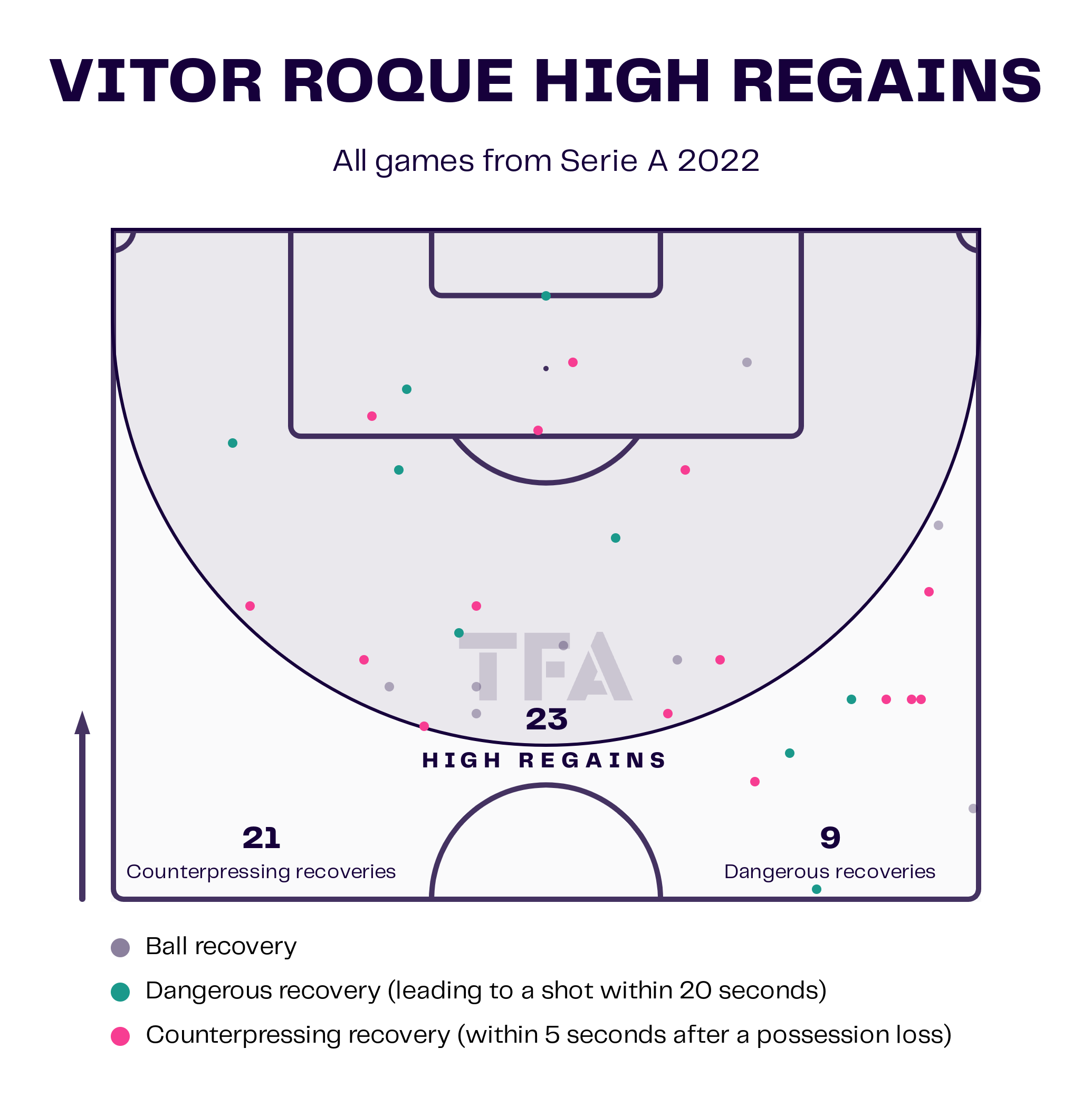 The above viz depicts Vitor Roque’s high returns from all games in the Brazilian Serie A. He has a total of 23 high regains. Additionally, Vitor makes attempts to recover the ball quickly, making 21 counter-press recoveries. He also contributes to nine dangerous recoveries overall. 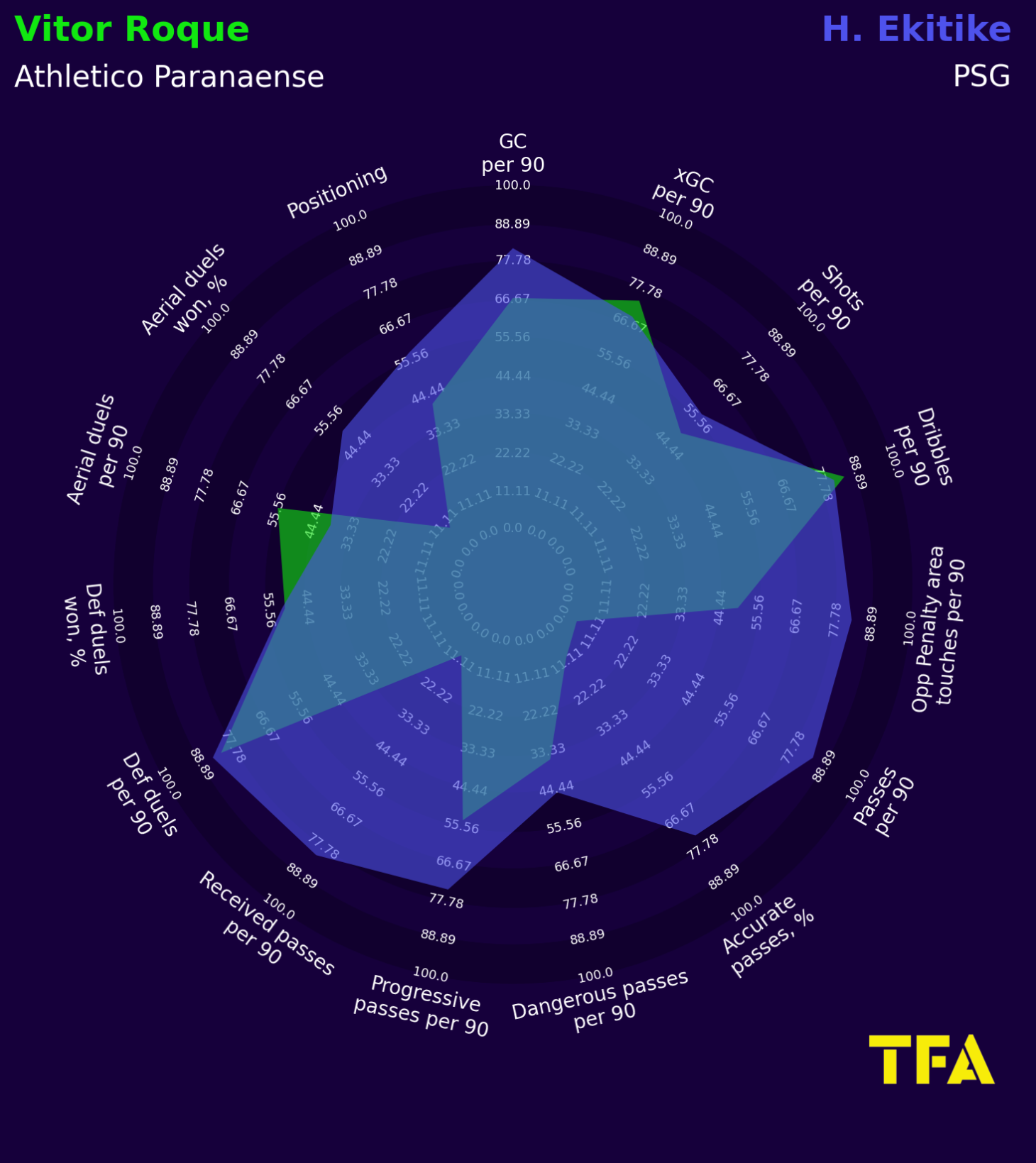 The above viz is a comparison between Vitor Roque and Hugo Ekitike of PSG. In Ligue 1 2022/23, Hugo Ekitike has played two matches (plus seven as a sub). He has three shots on target from a total of five and has scored one goal (1.19 xG). Hugo Ekitike averages ten passes per game with an 88% completion rate and two assists. It can be observed from the above viz that Vitor has better stats in terms of xG per 90 and dribbles per 90. There is only a minute difference in terms of goal contributions and shots per 90. Vitor is ahead in terms of ariel duels contested per 90. Both players have similar numbers in terms of defensive duels per 90.

Given the overall stats of Vitor Roque at such a tender age and his impressive abilities on the pitch, PSG will surely want to secure his services. In addition, the huge expectations set on him in terms of being a Brazilian star mean that Roque is looking for a club where he can find more fame. The quality shown by Vitor at the age of 17 is impressive, and this will only get better with time. Vitor Roque is an important asset and profitable investment for any team, and it will be interesting to see if PSG make a move to obtain his services anytime soon.

Under the microscope: How Monaco’s away form has been the biggest...